How expropriation without compensation works in Alexandra

A xenophobic mob is kicking people out of their homes

Last Thursday evening Sibusiso Vumase was entertaining guests when he heard a loud knock on his front door. When he opened the door, a group of people carrying crow bars and hammers were standing outside demanding that he immediately evacuate his RDP house and find another place to live.

On Friday morning Vumase was folding and packing his clothes outside his home in Alexandra Extension 7, getting ready to move. His belongings — cupboards, beds, a stove and piles of clothing — were on the pavement and in his neighbour’s yard across the road.

His house was left bare, with only stock from his spaza shop remaining in one room.

Vumase was born in Gongolo in KwaZulu-Natal. He was allocated an RDP house in 2007 after he was relocated from inner Alexandra by the City of Johannesburg. The City wanted to develop the area but it needed to demolish houses for the development to take place. The development was part of the Alex Renewal Project (ARP) — a project worth R1,3 billion — launched in 2001 to develop and upgrade the township.

This resulted in hundreds of people being relocated to “waiting rooms” where they would be allocated RDP houses in Extension 7 – a newly formed area near Marlboro, Sandton.

Vumase showed GroundUp a file with all his documentation including proof that the RDP house was his, and his South African ID document.

“I was very happy when I received my RDP house. There was even a celebration ceremony hosted by the City where they handed over our papers,” said Vumase.

This was not the first time the group had visited Vumase’s house. “They were here on Saturday [18 May] demanding to see the title deed for my RDP house and my ID,” he said. “I didn’t give it to them because I was afraid they would run away with it.”

Vumase said they told him to go to Home Affairs to verify that he was South African. He said they left with his house key and told him they will be back to check his verification document.

“I immediately called Councillor [Tefo] Raphadu. He said he will call these guys and tell them to bring back my key … They came back with my key on Monday but they still wanted verification that I was South African,” he said.

Vumase said he also called the police when the incident happened. “Two policemen came while these guys were still here but they just took me straight to the police station to open a case … They didn’t arrest anyone.”

Vumase said Raphadu had promised to meet him at Home Affairs on Wednesday to assist with the verification but he did not show up.

Despite Raphadu’s absence, Vumase continued with the verification process at Home Affairs. He was given a document that confirmed that he was a South African citizen but the document, which GroundUp has seen, was not signed or stamped by Home Affairs.

When the group returned on Thursday, Vumase said they accused him of never going to Home Affairs. “When I showed them the verification letter … they said: ‘Why are you showing us a document with no stamp? You need to get out of this house, we are tired of you.’”

“If you don’t speak a certain language or they just suspect that you are not from here, they will target you,” Vumase said.

The group proceeded to remove all of Vumase’s belongings out of his house. “I called the police and no one came. When I called again to ask why they didn’t come, they said they had sent someone and then dropped the phone.”

But Alexandra SAPS spokesperson, Stephen Malatji, said the accusations that police did nothing was “completely untrue”.

I called the police and no one came.

“There have been people who were arrested and have attended court cases for this very same issue. We have also held meetings with ward councillors so it is not true that the police are doing nothing,” Malatji said.

Vumase is not the only resident of Alexandra who has been evicted from their RDP house by this group.

Malatji said SAPS was aware of these evictions because cases had been opened at the police station. In most cases, he said the people who were evicted had been accused of being undocumented and occupying the RDP house unlawfully.

But Malatji denied that the police had ever been called to the scene when the evictions were happening.

Temba Masimba was also evicted from his home in Extension 10, Alexandra, by “a mob of about 200 people” in January. According to Masimba, the group call themselves the “Dudulas” which means “to forcibly evict” in isiZulu.

Masimba, who grew up in Zimbabwe was recruited by a company in South Africa to work as an electrician. He became a South African citizen in 1996. He has lived in Alexandra for the past 25 years. 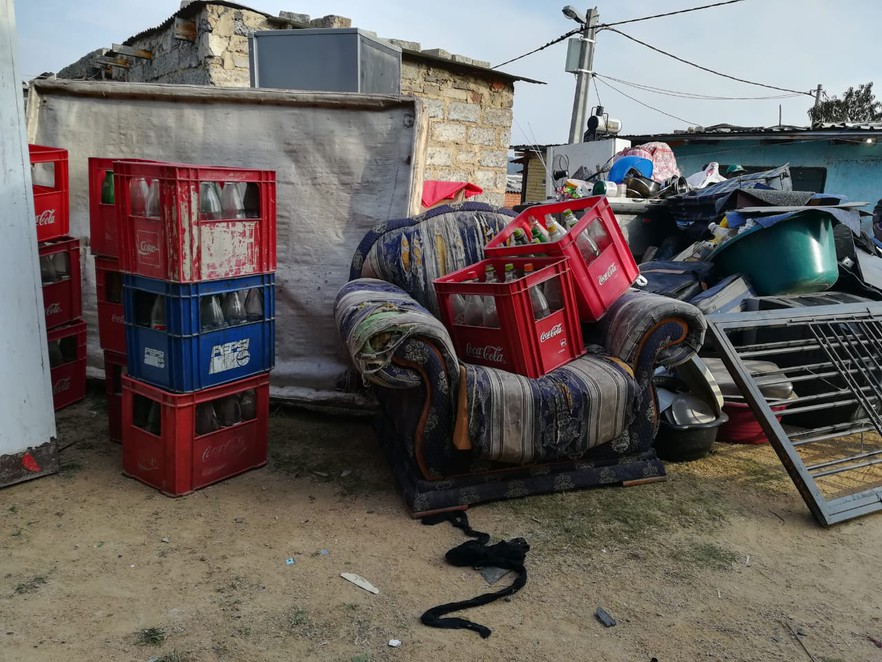 In 2011, Masimba was allocated a rental room in Alexandra by the City of Johannesburg.

According to Masimba, at about 3pm on 3 January, the group came to his rented room and told him that they were “sent by the people of Alexandra to get rid of foreigners”.

But Masimba said he refused to move because he was thinking about his children who were in Zimbabwe at the time. “What home would they come back to? I told them I have to wait for my kids to come back so that I can move with them.”

Masimba said he called the police “but to my surprise they disappointed us because they just drove past, made a u-turn and left”.

To be safe, Masimba decided to leave the house and rent a flat in Tsutsumani, a neighbourhood close to Alexandra.

He has opened cases with Alexandra SAPS “but nothing has changed”.

Jabu (name changed), a 49-year-old gardener from Zimbabwe, moved to Johannesburg about 30 years ago after his father passed away and his mother was unable to support his family. He is not a South African citizen but he has a work permit.

Jabu has been forced to live in a shack with his 16-year-old son after he was also evicted from his RDP house in Alexandra Extension 7 in November 2018.

In 2006, the City wanted to build a playground for a nearby school so it needed to relocate people who were staying in the informal settlement surrounding the school. Jabu said they were moved to waiting rooms where he lived for about eight months before he was allocated an RDP house.

He lived in the house for 11 years before one Saturday morning a group of what he estimated to be more than 100 people, mostly young boys and a few women, jumped over his wall and approached his front door.

“My son was home at the time and he was very scared so I gave him money and told him to quickly go to his uncle in Hillbrow,” he said.

Jabu said the group demanded to see his ID and title deed but like Vumase and Masimba, he refused to give them his documents. He said they picked up bricks and threatened to fight him. “The way they came to me, the attitude that they had, you could see these are tsotsis,” he said. “They didn’t want to talk. They came to fight.”

He said they started removing his belongings but he insisted on doing it himself. He loaded his belongings onto his bakkie and took them to a nearby crèche where he asked the owner to store them for him.

While loading his belongings, he called the police. “[The police] came to the house but they didn’t even get out of the car … I had to go to their window to tell them what happened. They said I must open a case at the police station,” said Jabu.

When opening the case, he said he was surprised to hear the police tell him that he should have defended himself. “I had two options that day: end up in jail for defending myself or end up dead … I was not safe at all so I decided to spare my life and just leave,” said Jabu.

He said he had spent thousands of rands renovating his RDP house.

“I built an outside room and toilet for my son because as he got older he needed his own space … I built a wall and installed a gate. I paved the outside area … Am I ever going to get that money back?”

“I don’t want to go back there because this problem will come again and it might not end the same way … They might kill us next time,” said Jabu. But he would like to swap his house with someone else’s in Alexandra in an area where he could be safe.

According to spokesperson of the City’s housing department, Buntukazi Xuba, a foreign national can only qualify for an RDP house if they have permanent residency. “This is quite rare as they are normally professionals who wouldn’t qualify for an RDP due to their income brackets …They need to be earning less than R3,500,” said Xuba.

But Vumase and Masimba are citizens and were allocated their houses legally.

Xuba said that once the department allocates a house to a beneficiary, the property no longer belongs to the City and anything related to it is a private matter.

She said that a victim of one of these evictions would have to lay a charge with SAPS or start an application for an eviction order at the High Court, where the person would have to prove the house belonged to him or her through a title deed or allocation documents.

Councillor Raphadu said he was aware of the evictions because he usually assisted the victims. “Housing and police know about this and ultimately it is their responsibility … I have been fighting with them to do their jobs.”

Vumase, Masimba and Jabu are victims of crude xenophobia that has seen their rights ignored, their homes stolen from them. The state, meanwhile, has not helped them an iota.