Dispute between shareholders and board leaves commuters without bus service 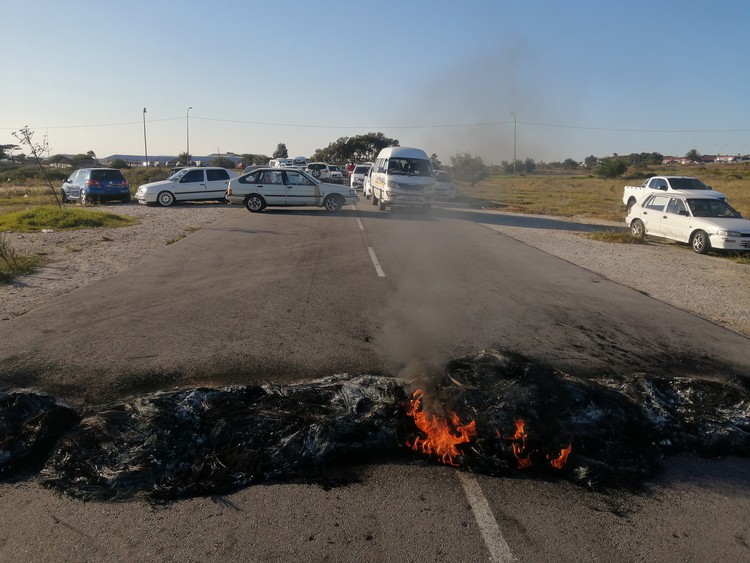 The Libhongolethu bus depot in Cleary Park, Gqeberha, was shut down on Thursday and Friday morning, disrupting service to commuters.

Protesters, who are shareholders of the bus service, blocked the entrance to the depot with burning tyres and vehicles in protest against what they say is the poor management of the company. They also blame the Nelson Mandela Bay Municipality for not intervening.

The fleet of buses is owned by the municipality which subcontracted Spectrum Alert, a private company, to run the routes. Many taxi associations and drivers became part shareholders. Spectrum Alert, however, has been overwhelmed by infighting and a series of protests over labour matters and the management of the project.

The protest on Thursday erupted because of a disagreement over the maintenance of the fleet. In particular, the company has outsourced maintenance to a private company.

Ricardo Tromp, chairperson of the Algoa Taxi Association, said they were upset to discover a private company setting up a maintenance depot inside the plant. “Our company has been captured by five board members. We can’t just fold our arms and let them do as they like. They run this company as their own spaza shop. They have forgotten that we sacrificed our taxis in order to make this project a success. They are making decisions without consulting the 185 shareholders.”

But Granville Malgas, chairperson of the Spectrum Alert board, said that the necessary procurement procedures were followed. “The outsourcing of the maintenance contract is warranted because of our failing maintenance department and the mechanical state of repair of our fleet,” said Malgas. “We do not have qualified mechanics which is a further motivation of our resolution. The outsourcing is not a permanent measure.“

Tromp raised a further issue: “All the shareholders used to get R9,000 monthly compensation. But that has been reduced by R2,000 without an explanation. We have been operating for three years but an annual general meeting (AGM) has not been held for two years because the board does not want us to question its poor management.”

His concerns were echoed by Christian King, chairperson of the Northern Areas Taxi Association, who said that they have been trying to hold the board accountable for months. “They are using our dividends money to pay for their legal fees when we take them to court for failing to call these meetings.

“We have been asking Mayco Member for Roads and Transport Rayno Kayser to intervene in this project. But he tells us that this is a private company and he cannot intervene,” he said.

Municipal spokesperson Kupido Baron confirmed this. The municipality cannot interfere in the operational management and labour issues of a private company, he explained.

Malgas disputed that the compensation fee was reduced. He said that on 15 June, shareholders were told that they will be given a part-payment due to the lack of funds and that the remaining funds will be paid when the company has sufficient funds.

Malgas also said that the Board is not shying away from holding an AGM. “We are currently addressing compliancy issues before we can legitimately convene the much-anticipated AGM.”

Next:  Patients at a Knysna clinic wait outside for hours to get medication