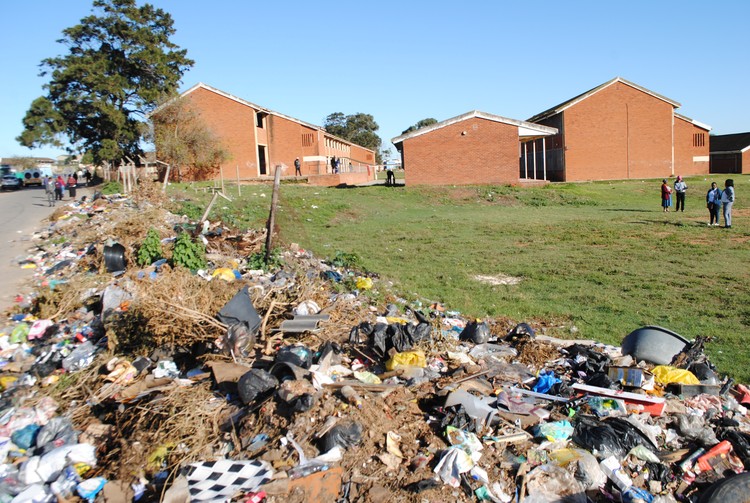 The perimeter of Garrett Primary in Gqeberha is covered in garbage. Photo: Mkhuseli Sizani

Parents at Garrett Primary in Zwide, Gqeberha blame the Eastern Cape Department of Education for letting the school’s grounds go to ruins. They say countless pleas for a fence to be built around the school have been ignored.

The parents have written several letters over the years to the district and national education departments but there is no sign of change. Instead the school’s condition is deteriorating and the safety of learners and educators is at risk, the parents told us.

Some of the classrooms have no electricity, the toilets are faulty and goats can often be seen grazing among the piles of rubbish on the school’s field.

Another issue is that there is a tavern just metres from the school. Residents told GroundUp that over weekends, the school’s toilets are used by the tavern patrons and others because there is no fence. They say activity at the tavern during school hours is extremely disruptive to learners and staff. Because of this, teachers have painted over some classroom windows and learners are not allowed to play outside during breaks for their safety.

An educator, who asked to remain anonymous, said their classrooms are badly vandalised and ransacked of laptops, doors, taps, electric cables as well as the school’s stoves and pots used in its feeding scheme. Only three of the 23 classrooms currently have electricity, she said.

She said the cost of repairs with the frequent thefts consumes the school’s budget. “We had to close three outside taps that the learners used to drink water after our municipal bill was over R600,000. Car washes around our school were using our water to run their businesses,” she said.

When we visited, the school’s toilets were dark, smelt like urine and some stalls were blocked with class desks. There are 18 toilets for boys and 24 for girls, but most of them do not work.

Dikeledi Ngqola, deputy chairperson of the school governing body (SGB), said, “My first born was here and we were complaining about the same problem. My second son is doing grade 5 and the situation is worse.” She said the SGB had to hire a private company to clean the school’s toilet after a weekend when it was covered in faeces and used condoms.

Mzuhleli Ngovela of the SGB said, “An official from the district office came and saw the need for a new fence. On 21 February 2022 we protested. That same day we sent a delegation to the district to ask about the installation of our fence. We were promised that by the end of March the contractor would be on site but that never happened,” he said.

Mandisi Gqalane, owner of Gqalane’s Tavern near the school, blames the police, unruly patrons and irresponsible rental flat owners for the state of the school’s grounds. He too was a former learner at Garrett. “It’s sad to see my former school being ruined like this. Our license does not allow public drinking but unruly patrons buy alcohol from retail shops and park outside here to drink. Then they play loud music in their cars. We have been asking the police to arrest these perpetrators but nothing has been done,” he said.

He added that the increase of the rental flats without proper waste disposal also contributes to the litter in the area.

When GroundUp contacted Malibongwe Mtima, spokesperson for the provincial Department of Education, he said that management is planning on doing the fencing. “The process has started but we are currently unable to give time frames. We will keep you updated as new developments are made,” he said.

On the issue of the tavern, Mgwebi Msiya, provincial spokesperson for the Liquor Board said that legislation stipulates that a tavern operating less than 100m from a school, church or public place has to apply for a special permit. Msiya said unless a school or another institution objects, nothing in the law prevents the tavern owners from operating near a school.

Next:  A crèche battles to survive after cops fail to pitch