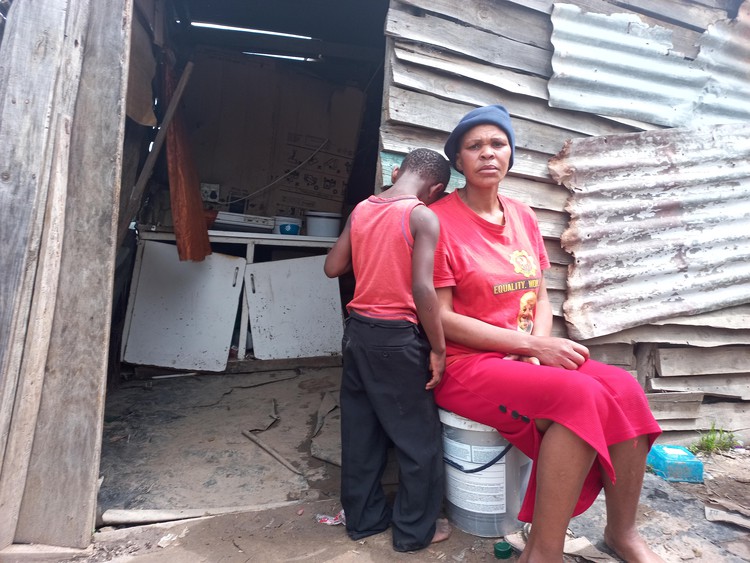 Siviwe Neti had to stay home with his mother Fundiswa while other children in his area went to school. Photo: Siphokazi Mnyobe

It was a sad start to the school year for nine-year-old Siviwe Neti and 12-year-old Luzipho Neti who had to stay at home and watch other children go to school. The children’s school uniforms, shoes and backpacks were destroyed in the floods in George in November last year and their mother cannot afford to replace them.

Siviwe was supposed to begin with grade 3 today and Luzipho was to start grade 6 at Matiza Primary school.

The heavy rain which flooded George on 22 November last year, blocking roads, damaging buildings and closing clinics and schools washed away the family’s possessions in their shack in Mandela Village informal settlement. “The floods left me devastated, with no hope of ever recovering from the damage,” said the children’s mother, Fundiswa Neti.

“All my electrical appliances that I bought using the children’s SASSA grant and money I get from washing my neighbours’ laundry were damaged in one day.”

“I can’t let my kids starve. I had to be wise and buy groceries, a school shirt and pants. I still need to buy school shoes, jerseys, backpacks, stationery and book covers. I could not buy everything at once - there are so many things I needed to replace including electric appliances just so we can cook and eat” said Neti.

The two-roomed shack in which Neti lives with the two children and her sister was wrecked by the rains. The family has shored up the walls with cardboard. Furniture donated by neighbours was ruined and the children now sleep on the floor.

Other families in the area are also living in poverty. The floods made it even harder for the community to assist one another because everyone is trying to fix the damage the rains caused them, said community leader Vuyisa Sapepa

George communications officer Chantel Edwards-Klose said necessities such as plastic, food packs, toiletries, mattress and blankets had been provided to flood victims and the Gift of the Givers has helped with provisions for the most seriously affected.

“We have however noted that some community members such as Neti whose belongings floated with water will need extra assistance. We are still formulating ways that we can assist them,” said the councillor.

Next:  Half a school has had to shut down because the Eastern Cape education department has failed to fix it