Clean up operations underway across city on Wednesday morning 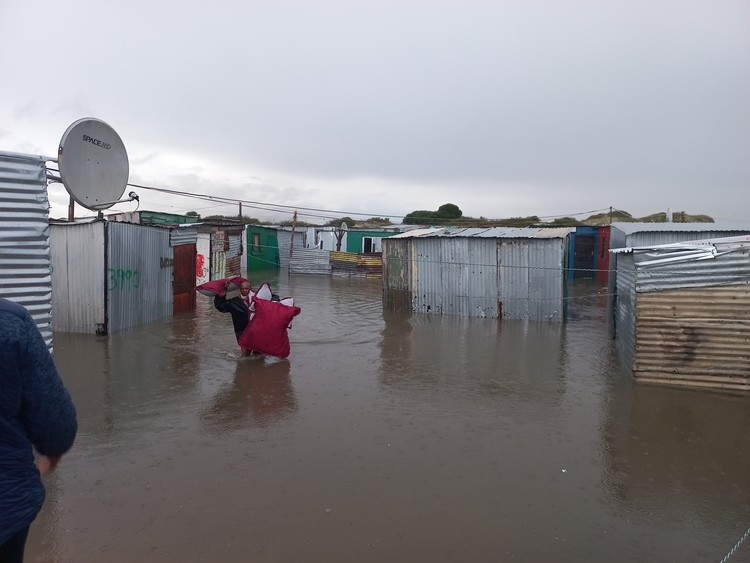 Scelo Sbozo carries what is left of his lounge suite after his home was washed away along with 44 other shacks at the Driftsands Nature Reserve in Cape Town on Monday. Photo: Siphokazi Mnyobe

When water started seeping into Scelo Sbozo’s shack during heavy rainfall in the early hours of Monday morning, he sought shelter with his wife and three young children at a friend’s shack on a hill nearby.

When the family returned at dawn, they discovered that their home was among 45 shacks in Driftsands Nature Reserve, Cape Town that were “washed away” by severe flooding in the settlement.

“I’m standing here in wet clothes,” Sbozo told GroundUp. “My family lost everything and my wife and I will have to start buying building material and appliances again. I don’t even know where we will get the strength or money for this,” he said.

Sbozo said that when the rain started, he and other residents had started moving their belongings but gave up when they realised that the entire area was flooded in knee-deep water.

“My wife and three children moved to the shacks up the hill to seek a place to hide until morning. When we arrived where my shack was located, my home had been washed away and only a few items of our belongings were seen floating in the water or spread out on the field,” said Sbozo.

According to community leader Luthando Mncuntula about 400 shacks were affected by severe flooding and 45 shacks were completely washed away. Covid informal settlement has 16 sections, three of which were badly hit by the floods.

Last week we reported on CapeNature’s plans to help relocate some of these families. 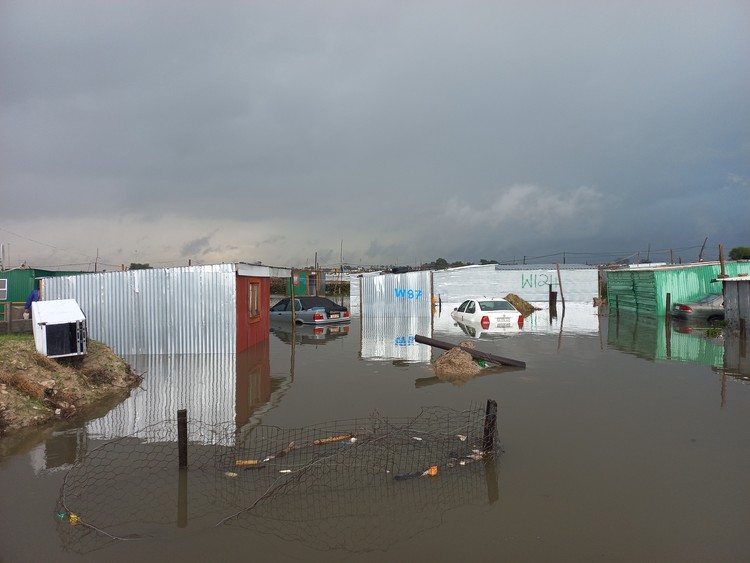 Three of 16 sections at the Driftsands Nature Reserve were completely waterlogged after heavy rainfall this week. Photo: Siphokazi Mnyobe

The Western Cape government had also said these families live on a wetland and along a dam wall and that the area is not fit for habitation.

Booi said that majority of the new settlements are on unsuitable land such as in waterlogged areas like ponds, wetlands and road reserves with other great constraints for service delivery. “The City advises residents that unlawful occupation holds great health and safety risks,” he said.

Mncuthula said everyone who occupied the land in Driftsands was desperate and needed shelter. “We are now in need of tents, temporary places to stay, food and blankets. We are still pushing and contacting organisations to assist us. So far we have not been successful,” said Mncuthula.

Families whose shacks were not severely damaged by the rain, opened their homes to the 45 households who lost everything they owned.

Sweetness Nzinge was stuck on her bed in Qaduqadu informal settlement in Khayelitsha after severe flooding in the area on Monday and Tuesday. Photo: Nombulelo Damba-Hendrik

Meanwhile in Qaduqadu informal settlement in Khayelitsha, 77-year-old Sweetness Nzinge spent the entire day on Tuesday on her drenched bed surrounded by murky water. Her three-room shack, along with other homes in the area, was flooded.

When we arrived, the first thing Nzinge said was “I’m so hungry”. She had not eaten all day because her daughter’s and her belongings and groceries were soaked. Because the toilets near her home also flooded, the dirty water and excrement were now also floating around her bed.

“My daughter just arrived from nightshift. I heard some people are at the community hall but I can’t move from here. The water is too much,” she said.

“I’m only worried about my health. I’m here because I have a doctor’s appointment in Tygerberg hospital. I will be sicker now,” said Zinge with tears running down her cheeks.

By late on Tuesday, most residents were still scooping out buckets of water from their homes and trying to clean out blocked storm water drains.

Community leader Mzikazi Thwani said a community member was rescued after sinking into one of the holes.

Clean up operations in different communities across the city continued on Wednesday morning.

Next:  Khayelitsha residents shelter in churches after non-stop rain

Previous:  How the JSC failed our judges – and the public