Road works started in 2014 on 23 kilometres of gravel road near Lady Frere in the Eastern Cape in 2014. But the R15 million job was never finished, leaving residents of Lady Frere with a dangerous road and many unanswered questions.

Lady Frere falls under the Emalahleni Local Municipality in the Eastern Cape.

Big Eye Investments (BEI) was contracted by the Eastern Cape Department of Roads and Public Works to repair and replace gravel on four roads in the area. Four months into the project, it was evident that BEI was not fulfilling its contractual obligations.

According to a report (3.3 MB, PDF) prepared for the Eastern Cape Department of Roads and Public Works by multinational consulting firm Aecom, the contract was terminated on 28 November 2014 for reasons including “poor progress, poor safety, and poor overall attitude. The company, said the report, had shown and “a clear lack of understanding of even basic construction norms”.

Approximately R3.5 million out of the allocated R15 million was paid to the contractor.

“It is recommended that the Department consider excluding this contractor for award of future construction contracts.”

Nearly four years later, the unfinished roads are still causing serious problems, especially during the rainy season. Vehicles are being damaged and children cannot safely get to and from school.

Dumisani Soboyisi was on his way back to Cape Town on a rainy day when he missed a turn because the road was covered with water. “The next thing my car was stuck in mud.” He had to get a tractor to tow it out.

Siphelele Mnyaka said he had to pay R11,000 to fix his bakkie after it got stuck on the same road late last year. “This is very frustrating because this road was supposed to be fixed by now. We are losing money and no one is going to pay us,” he said.

In October 2017, the community formed an association called Concerned Residents in an effort to find answers to their questions.

“[It’s] difficult for [community members] to talk with the councillors because they respect the officials; they don’t complain,” said the association’s media liaison officer, Nomfusi Soboyisi. “We’re not a political party, we’re just the locals, just the youth. We’re trying to talk on behalf of our parents.”

Residents say they met officials from the Emalahleni municipality but left the meeting without any concrete answers or tangible plans. They also say they met with the Department of Cooperative Governance and Traditional Affairs (COGTA), on 28 March 2018. There they learnt that the remaining money had been paid to other contractors to build other roads. It is unclear what criteria were used to select these roads.

Lukhanyo Fonte of Ndodana Consulting Engineers, who was hired to maintain the road after the BEI contract was terminated, said his firm had tried their best to patch the road and build a small bridge. But some parts of this road needed regravelling and his company was not hired to do that.

Eastern Cape government spokesperson Unathi Binqose confirmed that the contract with BEI had been terminated but refused to answer further questions.

BEI director Simon Ntuli did not respond to GroundUp’s inquiries. This is not the first company’s first controversy. According to a Saturday Star article published in May 2014 the then Gauteng MEC for Roads and Transport Ismail Vadi “named and shamed” the company “for neglecting potholes on a busy highway between Krugersdorp and Pretoria”. Ntuli, in turn, demanded that Vadi apologise, which he didn’t. 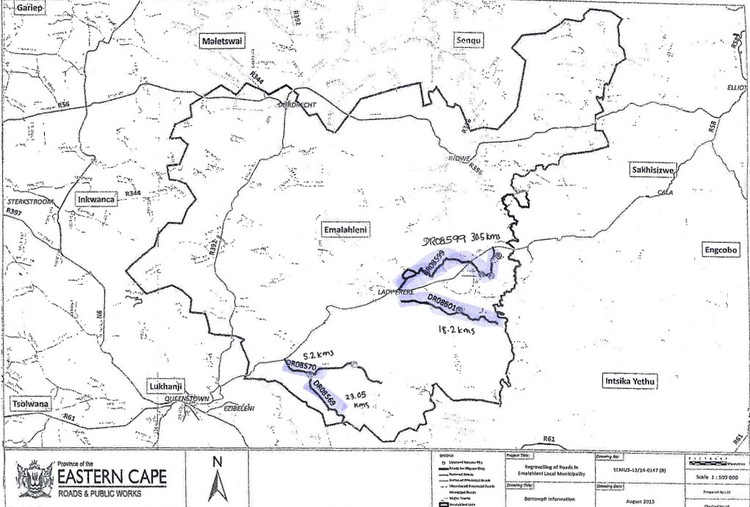 An Eastern Cape government map of the roads that are the subject of this article. We’ve highlighted the four roads.

Next:  No lights, no security and piles of rubbish at Parow train station

Previous:  Lubabalo Kondlo is the world draughts champion, but he is struggling to make ends meet