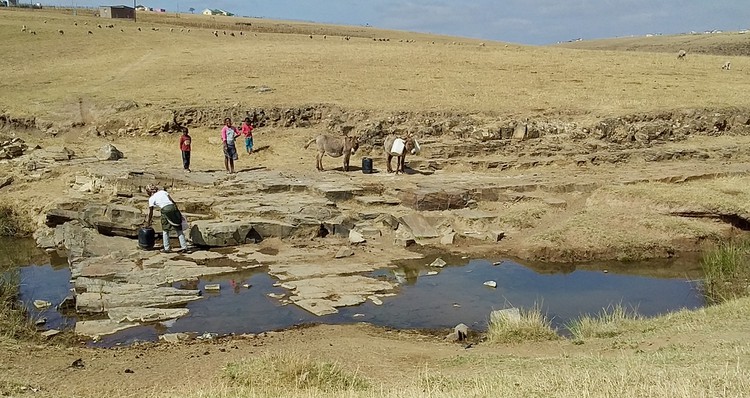 In April, Amathole District Municipality installed one 5,000-litre water tank to be shared by more than five villages – Makhakhanzima, Esigangeni, Endyityhaba, Ngquthu and Mdeni – near Dutywa in the rural Eastern Cape under Mbashe Local Municipality.

The tank is more than three kilometres from some of the houses. When we visited earlier this week, the tank had been dry for three weeks.

Villagers said that after it’s filled, the water doesn’t last two weeks. The tank has only been filled three times since it was installed in April.

A common complaint of residents we spoke to is the frustratration of not knowing when the water truck will pitch up.

Taps installed in 2013 in Ngquthu village worked for only a week, according to the villagers.

Women, elderly people and young boys fetch water by donkey from streams. The women walk in groups because, some said, they were chased by unknown men.

“Because the stream is between the bushes we come here in groups so we first call each other,” says Sinazo Shumi. Shumi said that to get to the water tank she has to pass two other villages, only to find it is empty.

She said animals use the streams to drink, and people do their washing in them too. “The water is always dirty during the day and if I want clean water I have to wake up at 4am.”

She said she takes 30 minutes to get to the stream, and sometimes has to wait for over an hour to fill her 20-litre bucket. “And you still have to come back, because one 20-litre can never be enough for cooking and washing.”

Madikizela-Vuso said due to bad road conditions tankers often need repairs and the vastness of the area makes the turnaround time longer. “A tanker takes days and sometimes weeks before it can return to the same village,” she said.

She said four tanks were delivered to the village, but residents say only one ever arrived.

There is also a wind turbine powered borehole, but it too runs dry.

Next:  Lockdown in pictures - Day 154: Yards are the new playgrounds