“It is easy for this government to shoot at us when we protest. But it is difficult to give us the houses we were promised since 2015” 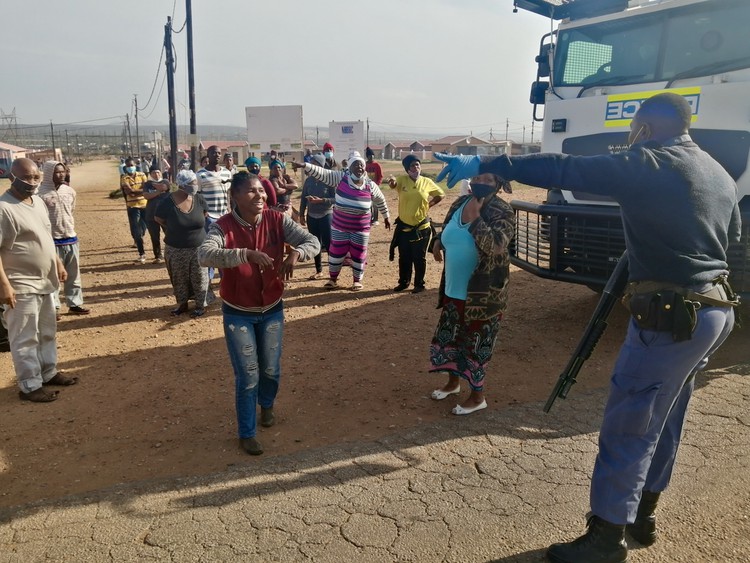 Residents in Khayamnandi Extension confront police for firing at them with rubber bullets. Residents have been demonstrating over faulty cement foundations for years. Photo: Mkhuseli Sizani

About 200 residents of Khayamnandi Extension in Despatch, between Port Elizabeth and Uitenhage, clashed with Public Order Police on Friday afternoon after they blocked Old Uitenhage Road with burning tyres and rocks. They are demanding that 116 poorly built cement foundations meant for RDP houses be rectified.

“Why are you shooting us like we are animals? Do you see baboons or monkeys here? You did not even bother yourself and ask us why we are protesting? You just shoot at us,” Xolelwa Gora told the police.

“It is not nice to see elderly women living in wet and cold shacks because of empty promises by housing officials,” she said.

The problem with the cement foundations has been on-going for years with Nelson Mandela Bay Municipality and the Housing Development Agency (HDA) playing the blame game.

Earlier this year, residents protested and the Eastern Cape Department of Human Settlements did an about turn and agreed to rebuild the 116 foundations by the end of March so that housing construction could resume. The Khayamnandi Housing Project will build 479 units.

Community leader Fanisile Mkolweni said the Covid-19 lockdown then interrupted things, “but now all the projects in many wards have resumed and nothing is being said about us”.

“On 26 June the municipal acting director for Human Settlements was here. He told us they were waiting for the Head of Department and MEC to sign in order for the project to start.

“He then promised to organise a video conference for us the following day with the relevant officials. But that could not take place. He told us that one of the officials at HDA offices died of Covid-19 and they could not use the offices. Since then we never heard from him. We even tried to call him but he is not picking up our calls. That left us with no choice but to come here and protest so that they can come and give us the answers,” he said.

Police spokesperson Gerda Swart said, “I can confirm three male suspects, between the ages of 43 and 48 were arrested on Friday following a protest action on Old Uitenhage Road.

“According to police information the suspects burned tyres and blocked the road. They were arrested on a charge under the Criminal Amendment Act – damaging of infrastructure. They will appear in Uitenhage Magistrate Court on Monday.”

Masiza Mazizi, spokesperson for Eastern Cape Human Settlements MEC Nonkqubela Pieters, said, “We are engaged in a process of ensuring that projects of outstanding rectification of houses and construction 116 additional houses kicks off. The delay was due to lockdown regulations.

“The MEC has delegated senior officials of the Department to meet with community leaders on Monday at 10am for a proper briefing in this regard. Both delegations from police and the community have agreed to this request.”