Midvaal gets clean audit, but some families still live in grim conditions 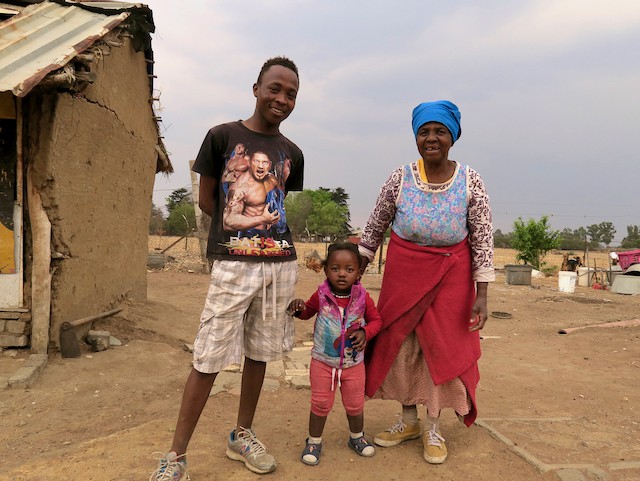 Mpho Sekhoto, his two-year-old sister Nyakalo Sekhoto, and his grandmother Ntsami Tsotetsi outside their dwelling on a smallholding in Midvaal. Living on private property, the family receive no municipal services, have to carry water from a tap near the landowner’s house, and chop wood to cook on an old stove. Like thousands of other households in Midvaal’s rural wards, they have to use a pit toilet. All photos: Steve Kretzmann

At 19-years-old, Mpho Sekhoto is uncertain whether he will vote in the upcoming municipal elections. Living with his mother, grandmother, and little sister on a smallholding in Midvaal, he is studying for his matric in Meyerton, Midvaal’s administrative centre.

Sekhoto receives no municipal services at home, other than refuse removal. His is one of many families living in conditions which have changed little since 1994, in wards 1 and 4 in Midvaal, Gauteng. These two wards, among those won by the DA in 2016, are by far the largest and most rural wards in Midvaal, stretching from the edge of Vereeniging’s Three Rivers suburb eastward to Heidelberg and southward to the Vaal dam.

Sekhoto is registered to vote, but may not do so.

“There’s too much corruption” in the EFF, he says, and the DA has been doing a good job of running Midvaal. “You can see the difference when you go to Emfuleni … Just look at the roads,” says Sekhoto, who lives just three kilometres from the border between Midvaal and Emfuleni.

Emfuleni is run by the ANC. The roads are full of potholes, sewage runs through the streets, and refuse lies uncollected on street corners.

Like many families in Midvaal’s farms and rural areas, Sekhoto and his family occupy an old labourer’s cottage with the addition of shacks on a small patch of land on a smallholding. Their tenancy is largely reliant on the landowner. Having lived in the original labourers’ rooms and lean-tos for at least 20 years, they are protected under the Prevention of Illegal Eviction (PIE) Act, but in reality their poverty gives them little access to legal resources should the landowner decide to evict them.

The only household income is from Sekhoto’s mother. She works two days a week, earning R100 per day as a domestic worker, which is below the minimum wage. They can rarely afford to buy Eskom-supplied electricity, and water has to be carried from a borehole-supplied tap situated near the landowner’s house. Food is cooked on an ancient wood-burning stove. The toilet is a long drop surrounded by rusted iron sheeting, as it is for 1,628 households making up 33% of all households situated in Midvaal’s two most rural wards. 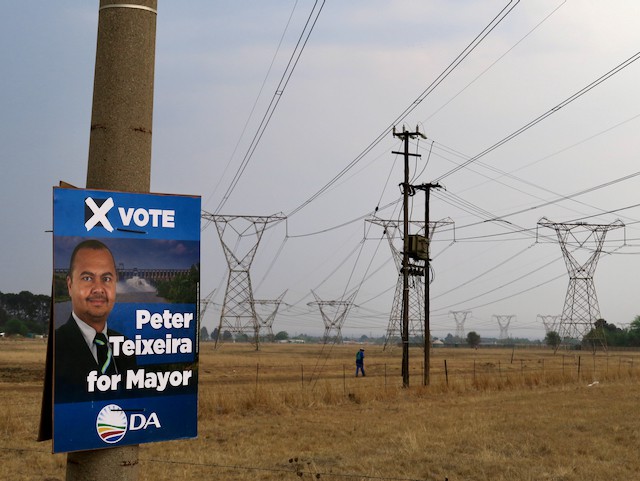 After two terms as mayor, Bongani Baloyi is leaving office, and Peter Teixeira, whose poster is pictured here in Midvaal’s rural ward 4 where he is councillor, is the new mayoral candidate.

The Midvaal’s DA mayoral candidate, Peter Teixeira says that as these families live on private land, there is little the municipality can do.

“Where we know about it we provide the most basic services,” says Teixeira, currently the councillor for ward 4, where Sekhoto lives.

So far, 115 JoJo tanks had been distributed “to our residents in need in the agricultural holdings” as well as in “small informal settlements in similar areas”. Clean water was delivered by tanker to those who could not access borehole water, he said. 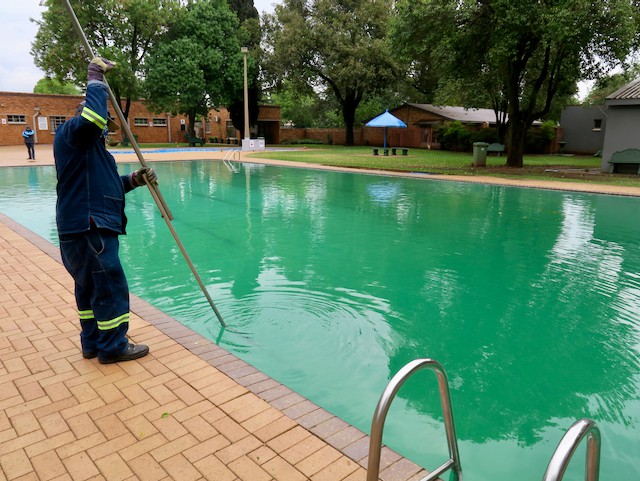 Midvaal’s public amenities, such as sports fields and its municipal swimming pool, are well maintained, in contrast to neighbouring Emfuleni where facilities are in poor condition or even abandoned.

Statistics on Wazimap suggest a significant number of households are in a similar situation to the Sekhotos. The two wards, covering 1,205 square kilometres – twice the size of the city of Pretoria – contain 5,000 households, according to the census. A quarter are classified as shacks, backyard dwellings, or ‘other’ – classifications which would include the Sekhoto family’s home.

Like them, over 1,600 households in these rural wards use a pit toilet, indicating that there are a number of structures classified as ‘houses’, which do not have sewerage infrastructure.

The majority of the population in these wards (59%) get their water from sources other than the municipality, most from a borehole, but some from tankers or ‘other’. Less than 40% of the population has matric.

Midvaal is not only the most sparsely populated municipality within Gauteng, it is also the whitest. The last census had 43% of the population classified as white. The DA has leveraged this traditional voter base, achieving 60% in the 2016 municipal elections. But the DA also beat the ANC in wards 1 and 4, where the majority is classified as black.

Although located in the economic hub of Gauteng, most of Midvaal is semi-rural, made up of plots of two to three hectares in size. 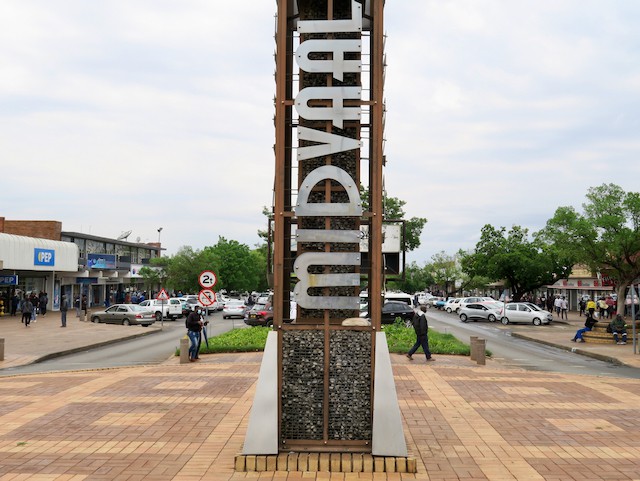 The main street in Meyerton, which is the administrative centre of Midvaal municipality, is clean and free of potholes.

Meyerton, the main residential area, is largely suburban. Verges are clean, streets are free of potholes, and municipal amenities such as sports fields and the municipal swimming pool are well maintained.

But in Sicelo, on the western edge of Meyerton, where an informal settlement is also situated, refuse is strewn on open land. In 2017, there were protests over housing, but the protesters targeted the provincial government rather than the municipality.

The two wards comprising Sicelo, 8 and 10, voted overwhelmingly in the ANC’s favour in 2016. However, two small business owners we spoke to said that while services in Sicelo were not as good as in suburban areas, it was much better than other municipalities in Gauteng.

“Midvaal is doing better than a lot of other places, so we can’t complain much,” said a tavern owner who asked to remain anonymous.

He said the municipality cleaned up the refuse on the streets “once or twice a month”, and sewage leaks were attended to within 48 hours.

His views were echoed by Abigail Nkunzi, who owns Nkunzi’s Food Corner. He said service delivery within the formal township was satisfactory, and the municipality fixed reported water and sewage leaks within a day or two. 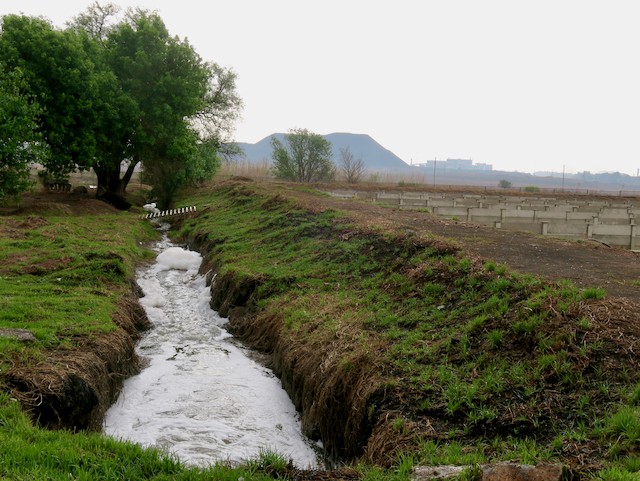 Effluent from Meyerton’s Wastewater Treatment Works fails to meet minimum standards, contributing to the pollution and ecological collapse of the Vaal River. The foam visible on the effluent flowing onto land which drains to the Klip River – a tributary of the Vaal – indicates high phosphate levels.

While sewage may not be running in Midvaal’s streets, as it is in many other municipalities, untreated or partially treated wastewater is running into the Klip River, contributing to the dead fish floating through Emfuleni and the severe pollution of the Vaal River. The effluent flows from the Meyerton Wastewater Treatment Works which suffers a chronic failure to meet minimum guidelines for physical and chemical indicators according to data held by the national Department of Water and Sanitation (DWS).

A South African Human Rights Commission report on pollution of the Vaal lists Meyerton as a contributor to what it determined a human rights violation.

Teixeira said the wastewater treatment works needs to be upgraded from just ten million to 25 million litres per day. The upgrade and refurbishment was being funded by the DWS, with work having started in 2017. He said the Rand Water Board appointed the contractor who then ran into “issues with local business forums”, and subsequently walked away from the job.

“We’ve written to DWS to get them to appoint a service provider to complete the work,” said Teixeira. With provision made in the current financial year’s budget, the municipality was awaiting DWS’s appointment of a new service provider.

Workers at the treatment plant said it was handling much greater volumes of sewage than it was designed for, which meant the treated effluent regularly failed to meet minimum standards.

Meanwhile heavy industry in the area includes a factory producing toxic Ferrosilicon for mining, which is situated on land draining to the Klip River.

But Teixeira said private industry was bound by regulations outside the local government mandate.

Midvaal has achieved unqualified audits for seven years in succession. It is one of just 27 municipalities in South Africa which received a clean audit for the 2019-2020 financial year.

According to Municipal Money, which shows data from the 2015-16 to 2018-19 financial years, Midvaal’s finances are well managed. As of 2018-19 it had cash reserves covering just over three months worth of expenses. The municipality overspent the operating budget by just 0.2%, which is well within bounds, but underspent the capital budget by 7.7%, where under-expenditure should not be more than 5%.

The other area of concern was spending on repairs and maintenance, which should be 8%, or 80c of every R10 spent on building or replacing infrastructure. The 2018-19 repairs and maintenance spending was 0%, and 0.2% of the annual budget was lost to fruitless and wasteful expenditure. However, the auditor-general did not find any significant deficiencies in internal control, and Midvaal has a high liquidity ratio of 1:26 and manages to collect 98.6% of all money owed from rates and the provision of services. 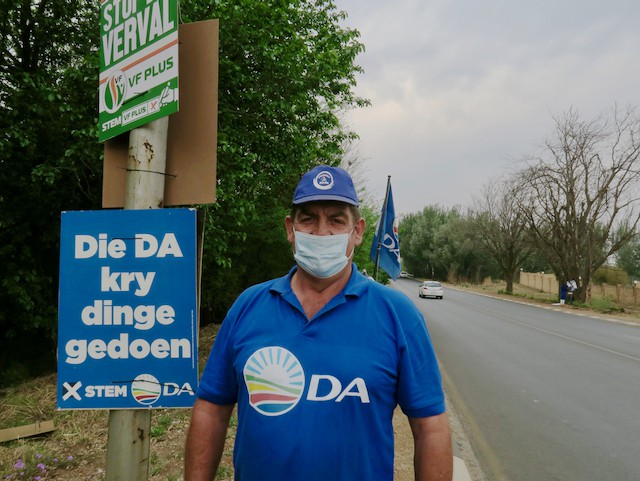 New DA ward candidate Johannes Gerrit was busy putting up election posters when we visited Midvaal. Greeted by numerous people driving past, Gerrit said their main concern, politically, was the FF+ whittling away the DA’s lead in the municipality.

But in 2016 the gap between the parties widened in the DA’s favour, with the DA obtaining 60% of support while the ANC fell to 32%. The 2016 municipal elections also saw the re-emergence of some support for smaller parties, with the EFF obtaining 5% of the vote, giving them two seats in council, and the FF+ getting 3%, giving them one council seat.

Barring a major scandal or faux pas, it seems unlikely the DA will lose Midvaal. 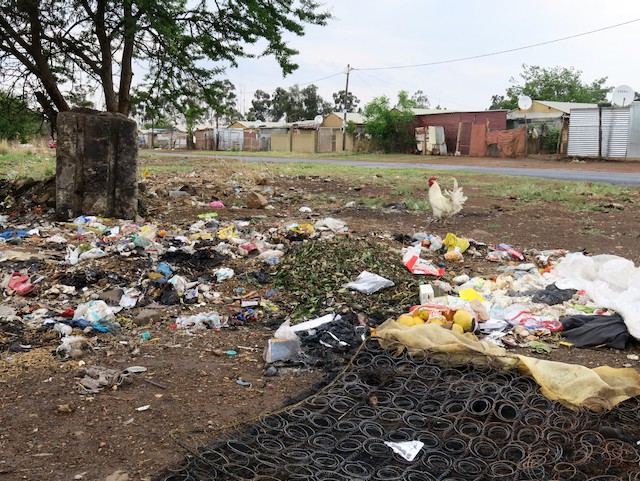 Illegal dumping in Meyerton’s Sicelo township mars Midvaal’s cleanliness. However, two business owners GroundUp spoke to in Sicelo said the municipality did make an effort to clean the area, and water and sewage leakages were fixed within 48 hours of being reported.

Next:  Undocumented people can now get Covid vaccines - in some areas