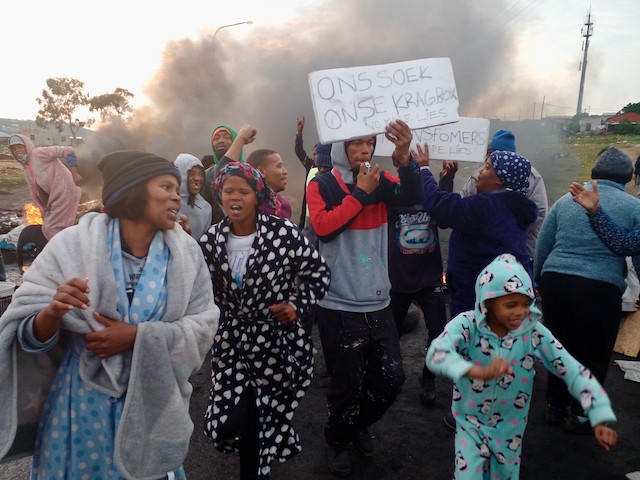 Over 200 Kliprand residents blocked busy Old Uitenhage Road in Gqeberha on Wednesday morning to demand the completion of a project to electrify their shacks. The project ground to a halt in November.

As early as 4am on Wednesday, still dressed in their pyjamas, residents used rocks and burning tyres and rubbish to block the road.

This followed a similar protest on Monday, when ward 33 Councillor Mzwandile Sidina (ANC) promised to bring officials to address the community. But nothing happened.

Then rumours spread that electricity transformers had been sent to the Nkandla informal settlement, three kilometres away.

Doreen Jack, a community leader, said that the project started in September. Poles and cables were installed. After that electricity would be provided to 380 households, but in November the project suddenly stopped. “We thought that the contractor would come back after the Christmas break,” said Jack.

She said the municipality told them in January that electrification would be completed in April.

Jack said it costs R900 for a cable to make an illegal (izinyoka) connection.

“Our lines are very dangerous because some of them even cross over the river where people and children pass to get to Govan Mbeki township,” she said.

Resident Sumaya Campbell said she pays R150 a week for an izinyoka connection.

“A litre of paraffin costs R27. We don’t have the bushes to collect wood,” she said.

Siseko Mnqanqeni, project manager at Nelson Mandela Bay electricity department told GroundUp that the project should have taken five months, but that service providers are struggling to access the material, like bushings, an insulating component that connects the transformers to the distribution cables.

“We don’t know how long it will take for the contractor to buy them, but in the meantime we have agreed with the residents and the contractor that tomorrow the project will resume with the installation of the transformers, metre boxes and cables.”

Mnqanqeni addressed the protesters and asked them to appoint a liaison committee of five people.

Councillor Sidina said: “Residents asked for the transformers to be installed while waiting for the bushings and they promised to guard them against vandals.”

Next:  As deadline approaches Zimbabweans face a stark choice: start from zero in a broken country or live undocumented in SA

Previous:  Officials warn of “collapse” of health service but court says they are to blame