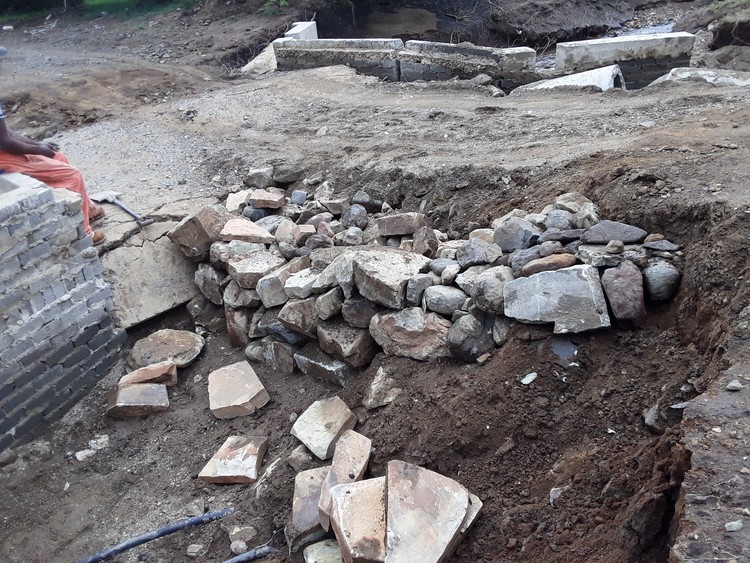 This R220,000 bridge in Maqwathini in Lupapasi, Eastern Cape collapsed during heavy rainfall in December 2021, just a month after it was built by a government contractor. Residents now want government to build a stronger and safer structure. Photo: Yonela Ngqukuvana

A bridge connecting villagers from Maqwathini in Lupapasi and surrounding areas in the Eastern Cape to essential amenities in town like shops and clinics collapsed during heavy rains in December 2021.

For weeks, residents have had to cross the river using the crumbling structure. Maqwathini Village is under Emalahleni Local Municipality.

According to community leader Headman Gungqa, the eight kilometre road was built by a contractor called Qush Plant Hire in November at a cost of nearly R8 million. Construction of the road, including the bridge, was still underway when the company halted work for the December festive period.

But when heavy downpours hit at the end of December, the temporary bridge was partly washed away, making it dangerous for cars and people to cross.

Resident Mzoxolo Gosa and a few others volunteered to fix the temporary bridge by shovelling sand and other material across the space to allow people to cross and travel into town for services.

Gosa believes that the contractors cheated residents by not completing the job. “The bridge was not even strong enough for vehicles to pass. They did not even hand it over to the community. We are pleading for the government to rectify the situation by constructing an elevated bridge,” he said.

Taxi owner, Alfred Klaas, said growing frustration over the poorly built road and bridge forced him to use his own money to help villagers buy a bag of cement to construct a makeshift bridge so he can continue transporting residents to and from town.

When asked about the details of the project and contract with Qush, he only confirmed that the budget for the bridge was R220,000.

Binqose said the department is planning to build a bigger structure as the volume of water under the bridge was more than anticipated.

We made a number of calls and sent an email requesting a comment from Qush several days ago. These went unanswered by the time of publication.

Next:  The widespread misuse of antibiotics in humans, animals and the environment must stop

Previous:  There are signs of hope amid Metrorail’s decay