Eastern Cape village without water since 2019 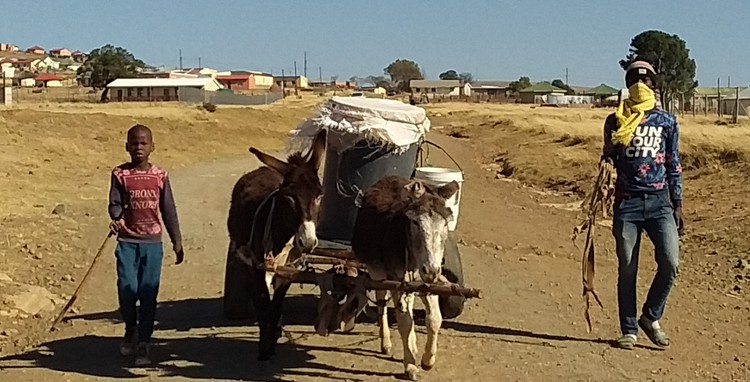 Villagers from Mcungco near Cofimvaba, Eastern Cape say their taps have been dry since 2019. Many residents hire donkeys to cart water from a neighbouring community. Photo: Nombulelo Damba-Hendrik

Villagers from Mcungco near Cofimvaba, Eastern Cape say their taps have been dry since 2019. Residents have been buying water or pay to have buckets filled and collected from a neighbouring village.

We reported in March 2019 that the village had gone for weeks without clean drinking water before the Intsika Yethu Local Municipality promised to restore their tap water. At the time, the district municipality said that an engine used to pump water was broken but the district had ordered a new one. But residents say very little has changed for them since then.

Resident Sikhokhele Matyi said, “At first [the district municipality] said the problem was with the engine. They claimed to fix it but still we didn’t get water. Another excuse was that the pipes were broken and then the drought.” Matyi said the Luxomo village where they collect water is also struggling but gets water supply intermittently.

Nowethu Ndlalo, 70, is among those who pay youths to collect water for her. She said she pays R100 for three 20 litre buckets. “Sometimes I get lucky. There’s a house that owns donkeys. If I hire them to fetch me water I pay R70. At least they bring me a big drum that lasts for a month,” she said. Ndlalo said there’s also a truck that delivers water in the area for R700 but she is not able to afford this.

Ganyaza said the district has over the years done repairs and maintenance on existing infrastructure, and water rationing in affected areas among other things. She said the water issues in Mcungco were mostly due to illegal connections.

Ganyaza said that the illegal connections significantly “impacts the municipality’s ability to collect revenue” and adds excessive pressure on the already burdened infrastructure. “It becomes very expensive to adequately cater for all communities as pumping schedules are also extended to ensure that reservoirs are continuously filled.”

Next:  Activists impatient with long wait for promised social housing