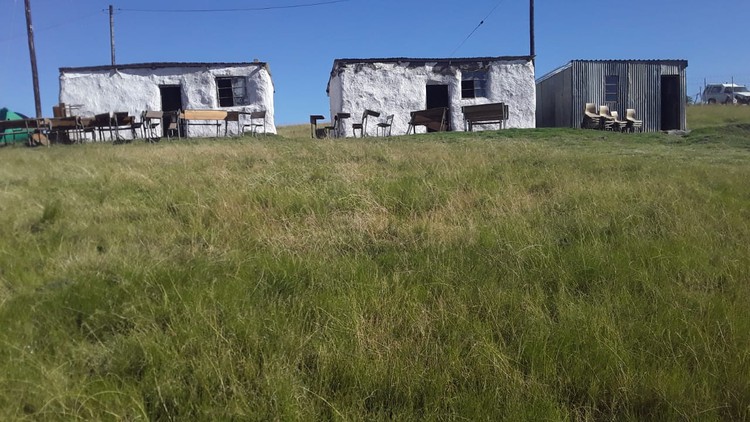 Parents at Gobizizwe Senior Primary School in Port St Johns say they have been begging the Eastern Cape Department of Education to build them a new school for over 20 years. Photo: Nombulelo Damba-Hendrik

Parents at Gobizizwe Senior Primary school in Majola village, Port St Johns, say they have been begging the Eastern Cape Department of Education to build them a new school for over 20 years.

Gobizizwe was built by parents in 1984. The school consists of two mud huts, a shack and one prefab class used by teachers as a staff room. The school has 196 learners with 21 grade 7s who returned this month.

According to the national minimum norms and standards set by national education Minister Angie Motshekga in November 2013, all schools built out of mud, wood, zinc and asbestos should be fixed or replaced by 2016. This never happened.

In July 2018, Equal Education scored a major victory when the Bhisho High Court found parts of the government’s norms and standards regulations to be unconstitutional. The court ordered that classrooms substantially built from mud as well as asbestos, wood or metal, be replaced with buildings that meet the National Building Regulations.

Parents say each year a construction team is sent to survey the land but nothing has come of it apart from new toilets. Most grades are combined due to the lack of classrooms.

When the school opened for grade 7s, the 21 learners were divided and are using the two mud huts. The doors and windows are also broken.

Parents said that in 2017 they staged a protest during the local government elections, refusing to vote because the school was used as a voting station. They said it was only then that four prefab classrooms were delivered but the prefabs had no roofs, windows or doors. The prefabs were destroyed by strong winds a year later.

Gobizizwe also relies on one tank for water. When it runs dry, learners fetch water from the nearest river about two kilometres away.

School governing body chairperson Bhekilanga Ngqele said he was one of the parents who built the school in 1984. According to Ngqele they started by building two rondavels using sticks and grass.

“At the time there was no school here. The nearest school is eight kilometres away which was very far for children to travel on foot. Learners were forced to start school when they were older and some didn’t even go to school. The number of dropouts was huge,” said Ngqele.

Ngqele said in 1996 strong winds partially destroyed the two rondavels and two years later the school was hit by flooding.

“It was the saddest day in this village, but we did not give up. This was when we started to ask government to build us a school. While waiting for government, parents decided to continue building the school. We each donated R50 for roofing and to add the shack,” said Ngqele.

Teachers, who asked not to be named, told GroundUp that when the other grades return to school next month, the school will not have enough space to accommodate them. “We already divided the grade 7s, meaning other grades will have to study outside,” said one teacher.

Modi Maqabaza chairperson of an NGO called Umanyano Lwabaphulaphuli visited the school last week. “The classrooms have broken windows and there are no ceilings. We met parents who were preparing to clean the school. It is very sad to find such a school in 2020,” he said.

He said learners could be relocated to neighbouring schools.

Previous:  Shack dwellers make up their own housing list for new City of Cape Town project

The money allocated to combat Covid-19 should be used better

This virus has made us address a lot of problems in South Africa. It has shown us that our infrastructure is inadequate in so many parts of the country. There also aren't enough schools, hospitals or clinics. Most of these places cannot be run properly because they lack the basic resources they need.

More of the money that was received in the last few months should have been put to good use. It should have been used to build schools while providing others with desks, water tanks etc. Clinics should be upgraded and hospitals should be given all the necessary medication and equipment they need not just for now, but for the years to come.

The money should've also been spent on job creation and training, since so many South Africans lost their jobs due to Covid-19.