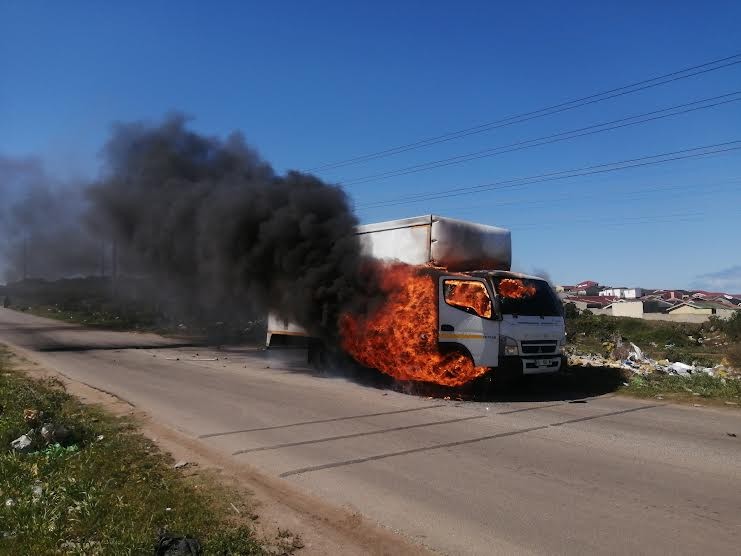 A delivery truck was torched during housing protests in Gqeberha. Photo: Mkhuseli Sizani

The construction of 6,500 housing units promised by the provincial housing department has been halted since 2017 by delays in building bulk sewage and water infrastructure by the Nelson Mandela Bay Municipality.

The protest started at 8am. Residents got angry when ward 36 councillor Khanyisa Mani (ANC) failed to satisfy them with responses to questions. He was accused of being distanced from the community, failing to giving them progress reports about developments in the area and failing to “thank them” for their votes.

He said: “When I took office there were no documents to check which projects have been completed or left incomplete. Secondly I did not know which committee to report to because I heard that there are two committees that represent the community.”

Some of the residents insulted him and accused him of being useless and ungrateful.

Just before 12pm, after he and police had left, protesters started stoning vehicles. A truck delivering chips was stoned, looted and torched. 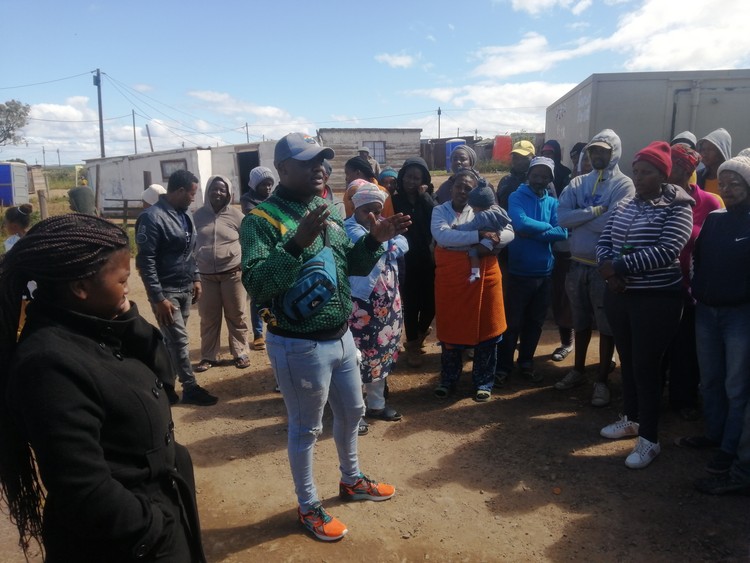 “In the meeting we asked Human Settlements to speed up the construction of our houses but the Department told us it cannot build us houses if there is no bulk water and sewer infrastructure. It asked the municipality to finish up the bulk and sewer project first. Then it will immediately build our houses.”

Ntsondwa said they decided to protest in order to get attention. “About 600 residents participated in today’s protest,” he said.

Ntsondwa said the settlement was over 22 years old but still had no proper roads, houses and flush toilets.

“We have 68 standpipes and 35 are not working. Our streets are always muddy because of the leaking taps. Rubbish is not collected and we resorted to illegal dumping. We report these problems to our ward councillor but he is failing to help us,” he said.

Philasande George has been living in the area with her family of eight since 2000. “Most of our taps are faulty and others had to be closed,” she said. “On weekends there are always long queues. Our shacks are leaking and old. Most of us here survive on social grants and we don’t have money to renovate them.”

“But our main problem is the toilets.”

On Tuesday afternoon a public meeting was held between the ward councillor and residents. Mani said he would investigate the reason for the delays in construction. He said residents had also demanded new toilets, refuse removal and rubbish bags. The meeting had agreed to delegate some residents to work with him on these issues, he said.

Asked for a comment on Monday, acting Provincial Director for Human Settlements Caswell Mabunda told GroundUp he would prepare a response. He has not yet done so. Municipal spokesperson Mthubanzi Mniki has not responded to our questions since Monday or answer our calls.

Next:  New copyright bill will take South Africa into the 21st century at last