Vrygrond residents furious that the mayor addressed media before them, while she accused the community’s leadership of rejecting all the City’s proposals

On Tuesday about 150 to 200 Vrygrond residents marched from Keizersgracht Street to the Cape Town Civic Centre to hand over a memorandum to Mayor Patricia de Lille. Their key demand is for a piece of land known as Xakabantu to be developed for housing.

Vrygrond is a township near Muizenberg in the city’s south peninsula. Residents have protested many times over the past couple of months. Sometimes the protests have turned violent. For example a ward councillor’s car was burnt, and shops in a nearby shopping centre were looted.

Xakabantu lies between Vrygrond and the Muizenberg landfill site.

There have been attempts to occupy Xakabantu since April, but the City has demolished them, saying the land has been identified as a nature reserve.

In a memorandum at Tuesday’s protest the residents asked that Xakabantu be used for houses, a clinic, a high school and a police station.

The protest grew tense when it became clear that De Lille was not going to meet the protesters. “People of Vrygrond are not important to the City of Cape Town. Our problems are not important,” shouted resident Isaac Goliath.

Community leader Michael Khumalo said the issues they wanted addressed were the “same we addressed with [the mayor] in 2016 and again in 2017.”

“All we want is answers. She confirmed that she was going to be here. Now we are told she is not,” said Khumalo.

The mayor’s bodyguard had at first told the protesters that she was not there. Then later the mayor appeared and addressed the media. The protesters then refused to hand over the memorandum to a representative from the Mayor’s office.

Eventually, after back and forth conversations between officials and community leaders, the mayor came to address the residents. But, angered that she had addressed the media before them, the protesters jeered, shouted and swore at De Lille. The mayor was also dismissive towards the protesters, and at one point she and a protester shouted at each other, each accusing the other of lying.

De Lille then left without receiving the memo.

Earlier she told the media that she had met the leadership of the community for the past two months but that they have rejected all the proposals made by the City. In particular she said they had rejected three pieces of land that had been proposed.

“They have rejected our proposal and they have now demanded that the City close down a landfill site. We cannot do that. That is a landfill site that is servicing the whole of Cape Town,” said De Lille. 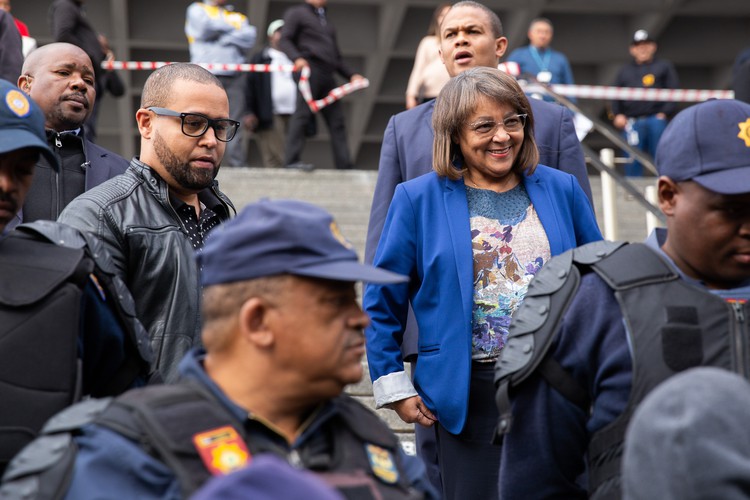 She said it has been explained to the Vrygrond leadership that the land that is proclaimed as an environmental area (i.e. the land that has been occupied) the City has “written to the national government to de-proclaim it, but that is also going to take some time”.

“So it’s just the case that the community leaders want to hear what they want to hear or nothing else,” said De Lille.

75-year-old Janet Stevens has been living in Vrygrond since 1991. She lives with her teenage granddaughter who attends High School in Lavender Hill. “I am here [protesting] because we are suffering. For so many years this community has been asking for services but our cries are falling on deaf ears. How long must we wait?”

“My daughter has to walk through a gang-ridden area to attend school. Everyday she leaves the house she is not safe because her community does not have a high school,” said Stevens.

She says she spends R40 on transport to go to the nearest clinic in Retreat, which she has to attend regularly.

GroundUp saw one of the residents get arrested by the riot police.

Next:  Can subsidised rentals help solve the housing crisis?

Previous:  Officials don’t understand how much I struggle to survive, says land occupier