Police are investigating as several other shacks were also destroyed, leaving some families homeless 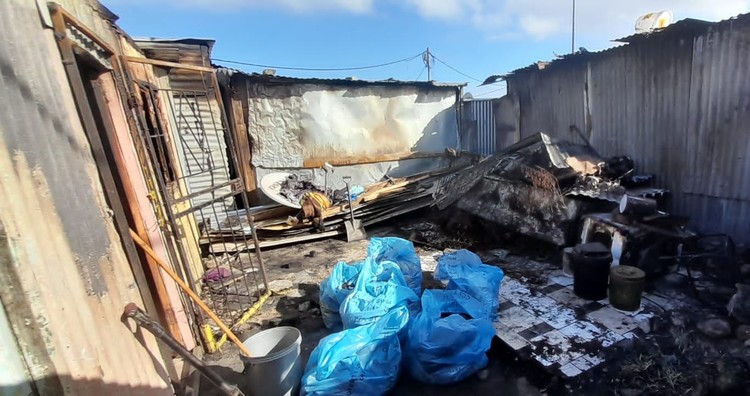 The charred remains of a young couple were found in their shack at Kosovo informal settlement in Samora Machel, Philippi on Sunday morning. Photo: Nombulelo Damba-Hendrik

Neighbours of a couple who died when several shacks burnt down in Samora Machel’s Kosovo informal settlement, Cape Town blame loadshedding for the deadly blaze.

The bodies of Agcobile Mlahleni, 27, and his girlfriend, whose name was not released to the media, were discovered in the charred debris once the fire was extinguished early on Sunday morning.

Mlahleni’s father was distraught and only said, “I lost a son. I’m still coming to terms with what happened.” He said his son’s girlfriend’s family was making arrangements at the police station at the time this reporter was at the scene.

Community leader Cebisile Bathathu said the fire started soon after loadshedding ended in the area at 4am.

“A few minutes later we heard a woman crying for help. We all went there trying to put out the fire because shacks are close to each other. We were lucky that the fire didn’t destroy many shacks,” he said.

According to Bathathu, whenever their community is loadshedded and the power comes back online, some people’s appliances are either damaged or spark and catch alight. They suspect this fire also started in the kitchen space near the front door, preventing the young couple from escaping.

Nontuthuzelo Matika, whose shack was also destroyed in the fire, said she smelt something burning outside after hearing screams for help. “I went to my room to fetch my kids and as I stepped out of my shack, the fire was already too much. The woman’s cry slowly grew softer until it went quiet,” said Matika.

The City of Cape Town’s Fire and Rescue Service spokesperson, Jermaine Carelse said the emergency crews from Gugulethu, Mitchells Plain and Epping responded to the incident where several informal structures were destroyed and seven people were left homeless.

Carelse said the cause of the fire is unknown. He said the scene was handed over to the police for investigation.

Previous:  Harrismith and several towns without power for six days