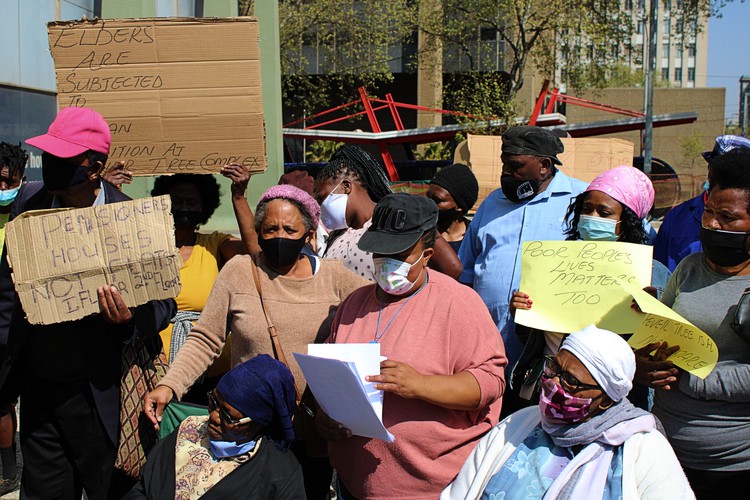 Mostly elderly residents of the Fever Tree Complex in South Hills, Johannesburg say the condition of the units is not suitable for them to live in. Johannesburg’s mayor, on Sunday, promised to launch an independent investigation into the developer’s work. Photo: Masego Mafata

Johannesburg’s Mayor Jolidee Matongo has promised to investigate the quality of the workmanship on South Hills’s mixed housing development.

Matongo and Gauteng Cooperative Governance and Traditional Affairs (COGTA) MEC, Lebogang Maile visited the housing complex on Sunday, 5 September. This after some beneficiaries picketed outside the City’s housing department in Braamfontein on Friday.

Residents of Fever Tree complex, the council-owned flats within the housing development, say the flats were shoddily built and, despite their complaints to the City’s housing department and Calgro M3 Developments, their issues have not been resolved.

The City contracted Calgro to build the flats as part of its Reconstruction and Development Programme (RDP).

Earlier this year, residents showed GroundUp some of the defects in the units, which include cracked walls, leaking pipes and poor drainage systems.

“We waited 22 years for houses, only to be given flats which have become dilapidated in just three years,” said Cecilia Seleng.

Seleng, 63, joined about 60 other Fever Tree residents picketed outside the City’s housing office. They demanded that mayco member for housing, Mlungisi Mabaso, come out to hear their grievances about the condition of the units.

Resident Makopi Mphahlele, 76, said she is concerned about her safety and that of other elderly residents living in the complex. “The stairs are wobbly and unsafe. There are no lights in the corridors so you cannot see where you are going when you walk at night. There is also no security guard at the gate so people can come and go as they please,” she said.

Mphahlele lived in Hillbrow before moving into her flat in 2019. “What angers me most is that when we report issues, no one comes to fix them. The drainage system is terrible and my toilet overflows. I am still waiting for someone from housing or Calgro to fix it,” she said.

Eveline Mfulwani, 67, lives with her two grandchildren. She is a pensioner and breadwinner, supporting her school-going grandchildren and her son in Rustenburg. “We received service bills from the City earlier this year. My bill is about R3,600. I don’t know how I am expected to pay that with my grant money. No one ever told us that we would be charged for services. We are paying for water and electricity, which is already straining on my finances. We can’t be expected to use our own money to fix things that are a result of shoddy work by the builders,” she said.

According to Urvash Kissoon-Singh, commercial and finance director at Calgro M3 Developments, maintenance issues in the units are the responsibility of the owner.

Singh said, “The City is the custodian of these units and should there be any complaints, this is reported to the City who then appoints a contractor to attend to these items. Calgro has been working with the City to remedy any valid complaints. We can confirm there are no structural defects on these units.”

Because Mabaso was in a meeting on Friday, Tumi Ramokoaba, community stakeholder manager in the housing office, signed the memorandum from the group on his behalf. Ramokoaba then promised to conduct an inspection of the units.

During his visit on Sunday, Matongo told residents that he would continue monitoring the housing development and ensure that the residents’ grievances are addressed.

Matongo said the investigation will be led by an auditor in the construction field. In the event that the faults point to the developers, they will be held accountable, he said.

“If the issue is on the City’s side on the provision of water and electricity, we will also certainly account and correct as a matter of urgency,” he said in a statement after the visit.

Next:  City of Cape Town defends its demolition of Green Point tent camp in court