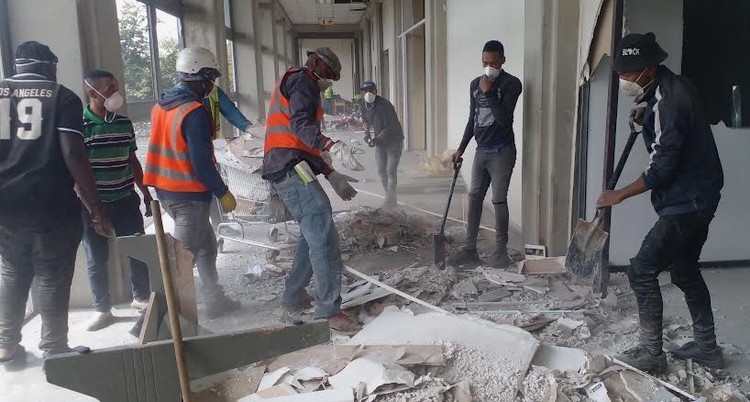 Volunteers have been cleaning up the mess in historic Walter Sisulu Square in Kliptown. Photo: Chris Gilili

The historic Walter Sisulu Square in Kliptown, scene of the signing of the Freedom Charter in 1955, has been filled with rubble and broken glass since looting started during last July’s unrest. This month volunteers came together to clean it up.

Continuing vandalism and looting since July have left the square with windows broken, electricity cables stripped, and water and ablution facilities damaged. Neither the City of Johannesburg, nor the Johannesburg Property Company (JPC) which manages the square on behalf of the City, have taken steps to clean it up.

On 7 May, armed with brooms, spades and gloves, residents and volunteers from Kliptown Flats Community Clean Up Campaign began cleaning up the square themselves and disposing of all the rubble and waste.

Resident Xennie Plaatjies said they could not leave the square to rot with no-one taking charge of it. Plaatjies lives in one of the flats owned by the Johannesburg Social Housing on one side of the square. Businesses operating in the square include furniture shops, hair salons, printing shops, tyre fitment centres, art galleries and a museum. There is an office of the Gauteng licensing department but it has been closed since last year.

“We started noticing the problems right after the looting last year. Most business and government offices shut operations in the square. Cables were being stripped out. We’re doing everything here out of our pockets without any help,” said Plaatjies.

Plaatjies said the initiative was not just about cleaning up. “It is about reclaiming this space and making Kliptown a safe place again. This square is now a spot for criminals. We couldn’t fold our arms and watch it rotting away,” he added.

Plaatjies is also leader of one of the patrols in which residents of the flats take part to keep the area safe.

Founder of the Kliptown Flats Community Clean up campaign Thami Ndengane said, “I believe that we should take ownership of protecting facilities around us. This is the Freedom Charter Square. It is very important to the history of this country. It is shameful and disappointing to see it in this condition.”

Kliptown resident Zintle Molefe said she was proud to see people taking ownership of their community.

“The change in Kliptown starts with us. We also would like to see law enforcement and the municipality helping us to reclaim this space. This square is a monument. The government can do better,” said Molefe.

“This place used to have 17 security guards.”

Ndou said ever since the unrest last year, the square had deteriorated as thieves made away with pipes, windows, cables and anything they could take.

The cleaning up of the square was now almost complete, Ndengane told GroundUp on Wednesday. He said volunteers were also guarding the area round the clock.

Ndengane said before starting the cleaning residents had a meeting with the JPC. The company had promised to hold further meetings and to maintain the square in good condition. But there had been no follow-up, he said.

GroundUp emailed questions to JPC’s business and operations senior manager Lilly Brown and to City of Johannesburg spokesperson Nthatise Modingoane on 9 May 2022. Modingoane acknowledged the questions and said he had forwarded them to JPC for comment on 10 May. GroundUp sent follow up emails and WhatsApp messages on 11 and 12 May. Brown “blueticked” the WhatsApp messages but has since blocked the reporter. Further calls and texts to Modingoane have gone unanswered.