City says incident is being investigated 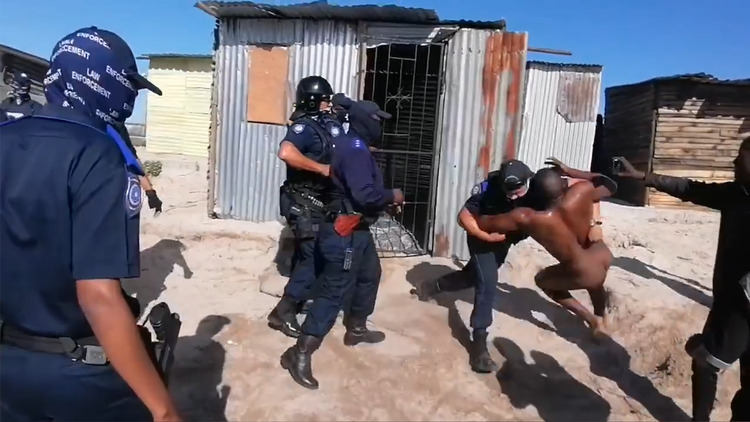 The City of Cape Town is investigating an incident in which a naked man was dragged from his shack during a demolition. Photo: from a video by Bonga Zamisa

The City of Cape Town’s Anti-Land Invasion Unit, accompanied by City Law Enforcement officers, demolished shacks at a site called eThembeni, near Empolweni, in Khayelitsha, on Wednesday. Video shot at the scene by Bonga Zamisa, a member of the Social Justice Coalition (SJC), shows a naked man being dragged out of his shack by Law Enforcement officers.

The man is seen wrestling with officials, before managing to re-enter his shack. City officials are then seen tearing this structure apart.

Further footage taken in eThembeni by Axolile Notywala, also of the SJC, shows the ALIU taking apart another structure that appears to be completed and occupied. Notywala said none of the ALIU or Law Enforcement officers at the scene were wearing name tags on their uniforms.

In response to a query from GroundUp, Luthando Tyhalibongo, Spokesperson, City of Cape Town, said: “The incident of a nude man depicted on the video occurred during a City law enforcement operation. The actions of officers involved in this matter are being investigated with urgency, including other footage which the City has, and once the investigation has been completed the appropriate action will be taken.

“The land in question belongs to the City of Cape Town and the City has conducted various operations to prevent illegal land occupation.” Tyhalibongo said new attempts “to invade again” were being made “on a daily basis”.

“The land is earmarked for installation of services to serve the broader community in the area” he said. “There is an interdict in place as well as a recent court order which allows only 49 households to temporarily remain on the land until after the lockdown. The City must also maintain this recent court order.”

The Prevention of Illegal Eviction Act stipulates that no person may be evicted without a court order. Further, no evictions are permitted under Lockdown Level 3.

On 11 April, the City of Cape Town’s Law Enforcement officers demolished about 30 shacks in Empolweni, and more structures were destroyed in the days that followed. These actions were challenged in the Western Cape High Court by the Legal Resources Centre, acting on behalf of those whose shacks were destroyed. On 14 April, Judge Brian Hack ruled that 130 people in 49 households should be allowed back onto the land and should have their building materials restored to them.