“We have not seen a water tanker assisting us” 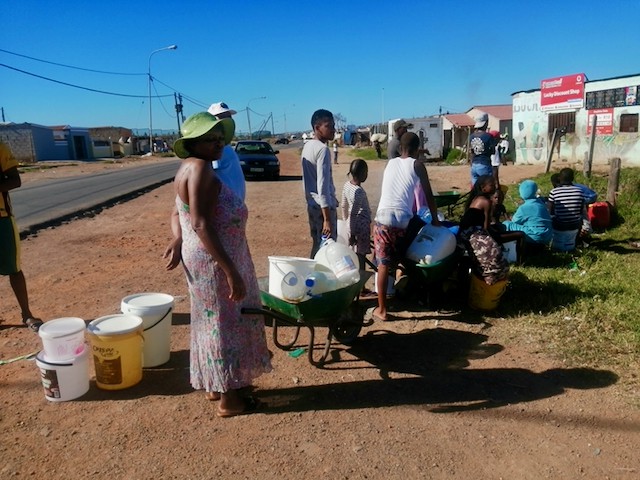 For three days, Govan Mbeki and Rolihlahla residents have been without water after a pipe burst near the Old Uitenhage Road, Port Elizabeth.

As early as 4am people from Rolihlahla, still in nightgowns, queued at standpipes in Missionvale, while residents of Govan Mbeki had to cross the busy R75 freeway to get water in Zwide.

Sicelo Nguta, 67, of Rolihlahla, who had been queuing since 7am, said, “At about 8pm on Sunday our taps ran dry and we don’t know the reason … These standpipes are very slow and are broken. We have not seen a water tanker assisting us to minimise these long queues.”

“There are five of us at home and we are struggling with water to flush the toilet. It’s hot and smelly in the house. Our children are crossing the dangerous roads to get water.”

“What is worse, some of the people come with bakkies with many containers because they don’t know when the water will be back,” he said.

Gordon Bovana, 68, said, “There is no water at home and I had to come and fill up these two 25-litre buckets. My shack is near the R75 Uitenhage Road but I had to walk all the way down here in Missionvale. I will carry my buckets all the way because I don’t have a wheelbarrow. A water tanker would be suitable to help elderly people like us.”

Zukiswa Xama, from Govan Mbeki, said, “Municipal workers pass on this road daily. They saw the water flooding the road and the incident was reported immediately. But until this morning [Tuesday] the water was still gushing and supply to our water taps was affected.”

Ward 31 PR Councillor Teslin Booysen (DA) said, “About 1,000 households have been affected in Rolihlahla. But water is available on standpipes … I only knew about the problem on Monday and I reported it.”

The pipe was finally fixed on Tuesday afternoon.

Next:  Families without water as City of Cape Town contract expires