Building stalled at yet another Eastern Cape school

Building at yet another Eastern Cape school has been stalled because of the failure of the provincial education department to pay the contractors. Meanwhile, matric pass rates have plummeted.

Construction of an R83 million new school for 1,100 learners at Bethelsdorp Comprehensive School in the northern areas of Port Elizabeth started in November 2018. The new buildings, replacing the 49-year-old prefab school, were due to be finished in February this year.

But the delays in payment of contractors have stalled the project and in the meantime the school has had to stop teaching technical subjects.

This, says principal Ralph Jacobus, is prompting many learners to drop out and join gangs.

“Where the new school is supposed to be built we had a workshop where we offered technical subjects such as boiler making, mechatronics, electrical and mechanical engineering.

“These subjects gave hope to many learners, especially those who could not cope academically.”

Bethelsdorp Comprehensive School is one of dozens in the province which were due for renovations which have been abandoned after the Eastern Cape Department of Education failed to pay contractors. On Monday GroundUp reported how parents and learners at Rufane Donkin Primary School, also in Port Elizabeth, had closed down the school in protest at delays in building.

The principal said the school attracts learners as far as KwaZakhele, Zwide and Motherwell, from grade 8 to 12.

“This school was built in 1971. It was to be used for ten years. But the authorities failed to keep their promise. Every year we have to fix it because the boards are rotting and shaking during windy days,” Jacobus said.

He said the school was vulnerable to vandals and thieves.

“On Sunday 12 January thugs broke into our computer room and stole three computers. Out of 34 classrooms 12 classes from the last block that separates the old and new building have no electricity. Vandals ripped out all the cables and entered through the ceiling.

“In 2019 we experienced many break-ins. As a result we spent all our budget of R400,000 in repairs. Doors are removed, window panes broken. We can’t do important school projects because we spend all our budget maintaining the school.”

He said the boys’ toilets were vandalised and flooded with water.

“What is worse, the vandals are stealing the building material of our new school. The community also buys those stolen goods.”

“These vandals are our drop-outs. Last year alone we had about 120 drop-outs. Those learners could not cope academically. They got frustrated and chose to commit crime. The area is infested with gangs, alcohol and drug abuse. If those subjects were still being offered we would not experience these escalating numbers of drop-outs, ” Jacobus said. 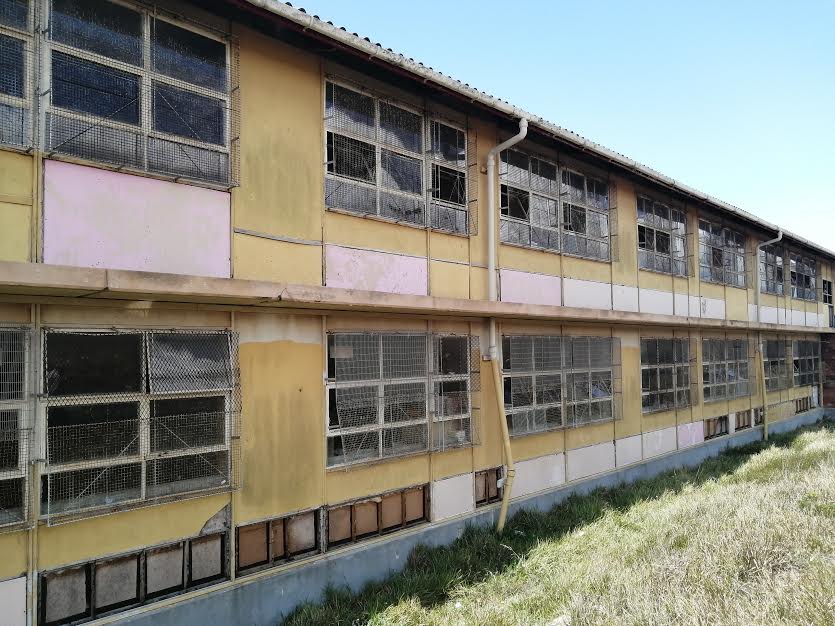 The school has been vandalised repeatedly, says the principal. Photo: Mkhuseli Sizani

Grade 12 learner Kyle Jacobs said many learners had lost hope after the technical subjects were stopped.

“Those subjects provided job opportunities and hope to the children of this community.

“Many of our drop-outs have become gang members, drugs and alcohol addicts,” he said.

A foreman from Yikusasa Builders who identified himself as Charnco said the R83 million project had been started in November 2018 but stopped in April 2019 because of the failure of the education department to pay.

“Vandalism is rife. The building material is getting stolen.

“Our top management is currently busy holding meetings with the department trying to find solutions.”

Site supervisor Mziyanda Ntulini said he and the guards did not feel safe on the site. “Gangs threaten and insult us. On rainy days they come and steal the reinforcement rods. Bricks are stolen every weekend. Last year, we recovered most of our stolen goods in a nearby scrapyard.”

We asked provincial education spokesperson Malibongwe Mtima about the unfinished school in December. He said the department had “financial constraints”. “We were also banking on money that would be top sliced from those departments that had underspent their budget.”

Last Thursday we asked Mtima whether the department had found money to finish this school. He referred us to Loyiso Pulumani, who said: “It would appear that that the contractor withdrew because of late and non payments for work done by them and their consulting agents.

“That impasse is currently receiving attention at the highest level and outstanding payments are being processed.” 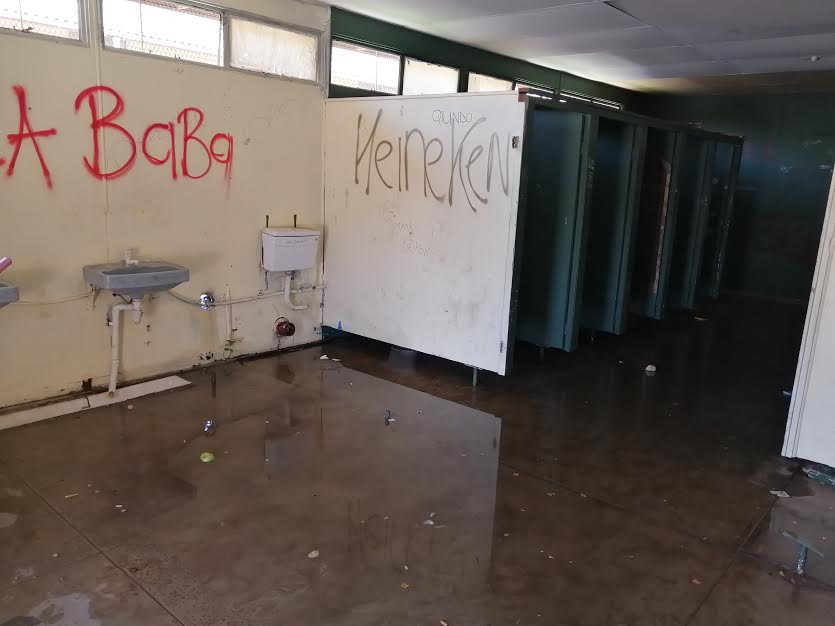 The boys’ toilets are in a filthy state. Photo: Mkhuseli Sizani

This article was changed to correct two names.