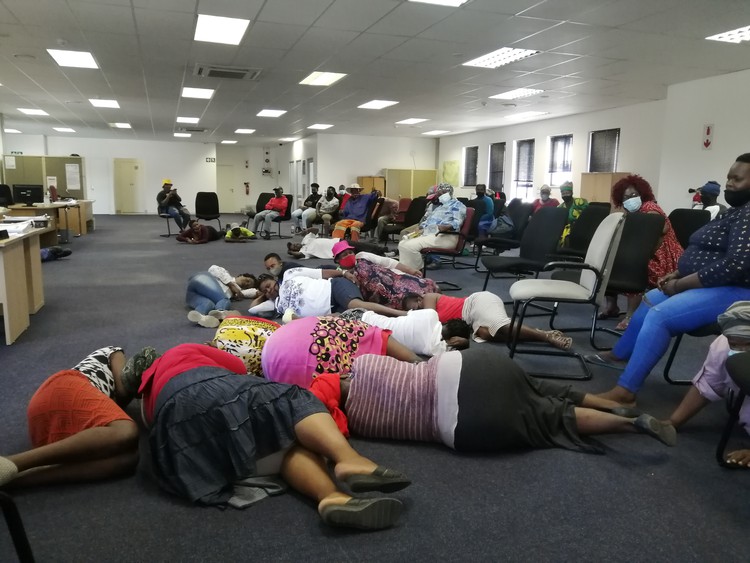 Beneficiaries of a project in KwaDwesi Extension in Gqeberha, Eastern Cape sat in the Housing Development Agency offices in Newton Park on Wednesday morning for four hours. Photo: Mkhuseli Sizani

At least 45 members of the KwaDwesi Extension community in Gqeberha (formerly Port Elizabeth) staged a four-hour sit-in at the Housing Development Agency (HDA) offices in Newton Park on Wednesday morning. They are demanding to be paid R1,500 they claim other beneficiaries got in 2018 for rent while their homes were being rebuilt.

Resident Nomangesi Shasha, who has four children, was among the protesters. Her family has been squashed in a one room shack for over a year. “Most of our furniture is badly stored in people’s garages and some of it is damaged. The landlords want the rent money. Some are already kicking us out or keeping our furniture until we pay them rent,” she said.

“I have a seven-month-old baby. We pee and poo in a bucket and throw it in the yard. At night we keep the bucket inside until the following day. The whole area stinks and our kids play in those unpleasant conditions. We have to beg for water.”

In August, the same group of residents blocked roads, demanding 50 RDP houses be immediately rebuilt. The houses were so poorly built that they were demolished in January 2020 in order to be rebuilt. But more than a year later, many of the beneficiaries are still living in shacks.

This angered the group who arrived at the agency’s office at 9:30am and refused to leave until their demand was met. The group threatened to burn the bungalows once they are brought into the area. Some residents even vowed to sleep at the offices until they got their money.

Ward 36 Councillor Nomonde Mhlobiso (ANC) and metro police were called to calm down the group, who were demanding to speak to the Human Settlements officials.

Khaya Panziso, chief construction project manager at the Department of Human Settlements, spoke to the beneficiaries and contractors over loudspeaker on Mhlobiso’s phone.

Panziso told the group that they were not aware of any previous rental fee arrangements with other beneficiaries. “Our contract requires the contractors to build temporary shelters for beneficiaries. We give the contractors money to do that. Only ten houses are allowed to be demolished at a time in order to quickly rebuild the houses.

“If there was an arrangement of payment between the contractors and beneficiaries that was fraud,” he said.

Angered by his response, beneficiaries were heard shouting and insulting Panziso, accusing him of being dishonest.

The Bethelsdorp Rectification of Houses project started in 2018 to rebuild or fix RDP houses that were poorly constructed in 1998. The HDA is the implementing agent.

In January 2020, construction on another 100 houses for phase 2 started. Two contractors, BM Matshisi and Veren Builder, were each awarded 50 houses. But the project was disrupted by the Covid-19 lockdown in March.

Community leader Ntombizandile Kwekwani said that the department’s refusal to pay the money has divided the community. “The beneficiaries are very angry. They accuse us of stealing their money because during phase 1 those beneficiaries got the money,” she said.

Kwekwani said one of the beneficiaries came to his house in December, demanding his money and accusing him of pocketing the funds. “Today we decided to come here with them to get the answers directly from the officials because they think that we are liars,” she said.

Maria Mtetwa, owner of Maria Construction which was appointed in October to replace Veren Builder, said Phase 1 of the project went well because they made arrangements to pay the beneficiaries R1,500 towards rent, rather than put up bungalows with no water or toilets.

“In return the department was paying us per bangalow. But now the project has been halted as beneficiaries demand the same treatment like the previous beneficiaries. We can’t put up the bungalows because they vowed to torch them,” she said.

The residents ended the protest at about 2pm.

Next:  Right to die: patients would be vulnerable to unscrupulous doctors and relatives, judge hears

Learners are taught outside at tiny rural school