Memorial service held for whistleblower, murdered for exposing corruption in the health system 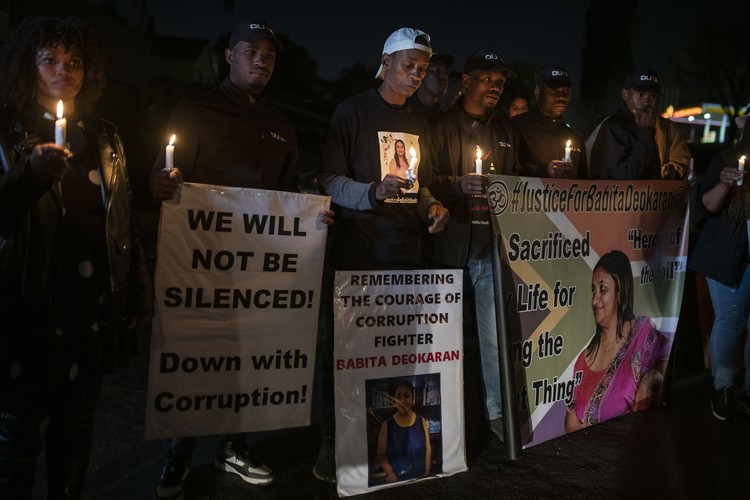 Family and friends of Babita Deokaran held a candlelight vigil outside her home at the spot where she had been killed exactly a year ago, after a memorial service for her on Tuesday evening. Photos: Ihsaan Haffejee

Whoever paid for the assassination of public servant Babita Deokaran must be brought to court, Deokaran’s family said at her memorial on Tuesday night.

Family, friends and civil society organisations gathered at the Mondeor Baptist Church in Johannesburg on Tuesday to honour Deokaran on the anniversary of her assassination. Deokaran, who worked at the Gauteng Department of Health, was shot several times outside her home in Winchester Hills after dropping off her daughter at school on 23 August 2021.

Investigations by News24 showed that that Deokaran had flagged several irregular payments involving Tembisa Hospital weeks before she was murdered. While some arrests have been made, the masterminds behind her murder have yet to be apprehended.

“What we want as a family is the perpetrators, those persons or person that have been responsible for the ordering of the hit. We want those people to be identified and justice to be served. Whoever paid for this assassination needs to be brought to court,” said Babita’s brother-in-law and Deokaran family spokesperson Tony Haripersadh.

Deokaran had raised the issue of her safety with her boss, Gauteng Department of Health chief financial officer Lerato Madyo, in the weeks before her murder. “I am just worried that the guys in Tembisa are going to realise we are not releasing their payments and know that we on to something. Our lives could be in danger,” Deokaran said in a WhatsApp message to Madyo.

“What hurts us as a family is that Babita brought this to the attention of senior officials that she thought would protect her,” said Haripersadh. “We understand that emails were sent to her that the matter had been escalated. And later after she had been murdered we understand that was only a lie.”

Speaking inside the church during the memorial, Deokaran’s sister Shaleen Ramgulam said: “Babita had a unique personality. I have never seen her lose her temper or raise her voice in anger. She had a quirky sense of humour. Babita’s life revolved around her commitment to her work, her home and her only child.”

“There are some who bring a light so great to the world that even after they are gone their light remains. That light is Babita Deokaran,” said Ramgulam. 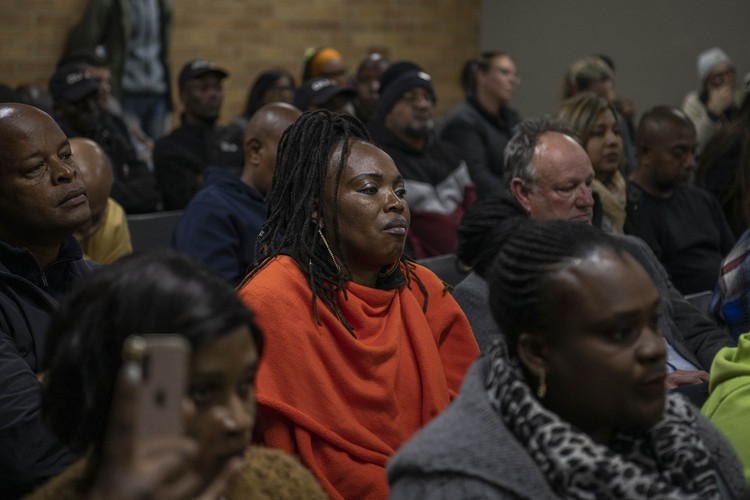 Speaking on the issue of protection for whistleblowers was Martha Ngoye, who lifted the lid on corruption at the Passenger Rail Agency of South Africa (PRASA). For her efforts in fighting corruption Ngoye was fired by PRASA.

“As a single mother of a 19-year-old I thank God to still be alive,” said Ngoye.

“Justice for Babita should have started with the people who harassed her at the Gauteng health department. These people still enjoy secure jobs because they remain useful,” said Ngoye, who emphasised that the highly corrupt are often the most politically connected. “The useful bureaucrats who assist the state capture masterminds are everywhere. Every few years, a different team of looters are deployed to different public institutions.”

Neeshan Balton from the Ahmed Kathrada Foundation said that there is a lack of accountability in all spheres of government. “These things happen because we have a political system that does not allow for accountability. We vote for political parties. But trying to hold a political party accountable in South Africa is virtually impossible. Which is why many are calling for a change in the electoral system which will allow us to vote for people to represent us directly in parliament,” said Balton.

After the memorial at the church, family and friends of Deokaran held a candlelight vigil outside her home at the spot where she was killed exactly a year ago.

Spelling of names was corrected.

Next:  Nurses at Free State clinic can’t treat patients when it rains

Previous:  Iqbal Survé’s newspapers take the side of the Lottery crooks