“It cannot be we parachute in and parachute out,” resident tells police minister at launch of latest crime prevention operation in Cape Town

Cele said 269 police officers have been deployed to work for three months in Cape Town. The situation will be assessed at the end of the three-month period, and should there be a need to stay longer, they will, he said.

“The operation came out of the concern of the communities in the Cape Flats and African townships for the murders that are taking place, drugs and gangsterism,” said Cele.

In January, Cele’s predecessor, Fikile Mbalula, had announced a hundred more officers for Nyanga, and in February he announced that “we have managed to quell the gang situation” in Cape Town.

Residents from a number of areas came to raise their concerns about crime. Vrygrond resident and chairperson of the Muizenberg community policing forum, Yoliswa Nqame, told the minister that there was a need for a police station in Vrygrond.

Residents from Vrygrond have to catch a taxi or hire private cars in order to access the police station in Muizenberg, which caters mostly to the more affluent communities of Kalk Bay, St James, Muizenberg and Marina Da Gama.

Chairperson of the Mitchells Plain community policing forum Lucinda Evans said, “I want to say to you minister and your leadership … we are not safe to walk in our streets … blood is running down our streets.”

“This programme [Operation Thunder] needs to be sustainable. It cannot be we parachute in and parachute out,” said Evans.

Residents, such as Gregg Steven Fick of Mitchells Plain, were sceptical. “In 90 days you will not be able to protect us against the thousands of crimes that are committed by violent gangs,” he said. 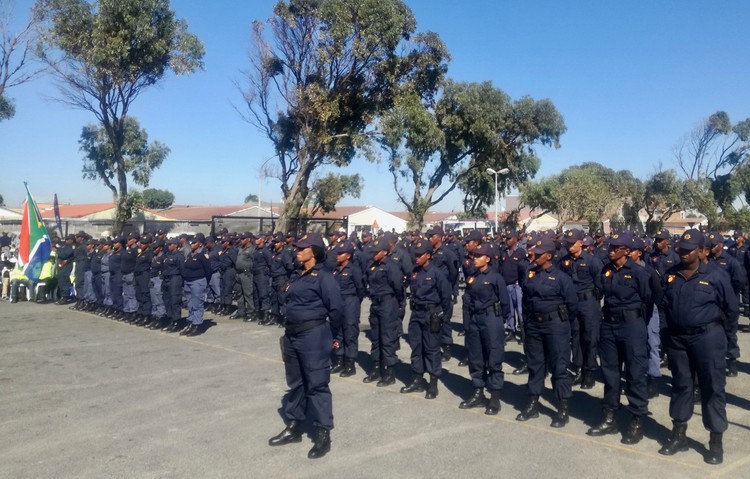 An additional 269 police officers will be deployed in Cape Town for three months. Photo: Thembela Ntongana.

Delivering his budget speech in Parliament later in the day, Cele said Tafelsig would get a station by 2021; Makhaza by 2022; Samora Machel by 2023, but will have a mobile station in the meantime.

An open field in Makhaza was proposed as the site on which to build the Makhaza police station back in 2004. During the Khayelitsha Commission of Enquiry in 2014, it came to light that the Makhaza police station was the second highest in priority on the list of stations to be built in the Western Cape as far back as 2004. Yet construction has not started, 15 years later.

The Khayelitsha commission in 2014 also recommended that Lingelethu West satellite police station, which currently has no holding cells and where dockets are kept in a storage container, be upgraded. In answering GroundUp’s inquiries, the ministry of police ignored questions about the status of Khayleitsha’s Lingelethu station.

The current police station in Nyanga does not have enough space to house its detectives and the Family Violence and Child Protection and Sexual Offences unit is at Mitchells Plain.

Police have placed a 24-hour satellite station in Brown’s Farm informal settlement, but residents say it is inadequate as serious crimes are only investigated by detectives at the Nyanga station.

In April 2016, Deputy Provincial Commissioner for operational services, Thembisile Patekile, told residents that a lack of land was preventing the building of a police station in Samora Machel.

Next:  Why do so many South Africans die of TB?