Students say the university is not doing enough to protect them

Students from the University of Cape Town demanded better security on campus at a protest prompted by the murder of first year student Uyinene Mrwetyana.

Mrwetyana was killed in the Clareinch post office where she had gone to collect a parcel. Her murder has sparked nationwide calls for action against violence against women.

On Tuesday a group of mainly women students moved across the campus disrupting classes and tests.

“It’s disrespectful to sit in a class, to sit in a lecture room and learn when women are dying,” said student leader Nomandla Vilakazi, explaining the reasoning behind the protest.

Students moved to the middle campus where they staged a sit-in outside Bremner building, which houses the university’s administrative offices. Vice-chancellor Mamokgethi Phakeng, flanked by members of UCT’s management, came outside to engage the students.

“We can sit here and blame one another, but I think that we should be angry at this world that has no respect for our lives,” said Phakeng. She said that the university intended to improve its security systems and would communicate plans to the student body in due course.

Students however, expressed their anger and disappointment with UCT’S management body and Phakeng in particular, saying Campus Protection Services (CPS) and the university’s transport system were inefficient.

“Our security doesn’t secure us,” one student said, complaining that she had been catcalled and felt unsafe near CPS officers.

“You are killing us!” said another student.

Earlier in the day UCT had announced that Wednesday 4 September would be a “day of mourning and UCT activism against sexual and gender-based violence” with a programme including a picket at the gates of Parliament, a memorial service for Mrwetyana and an assembly on the plaza outside the Sarah Baartman Hall.

Students were not pleased with the plan, saying the university had taken their ideas.

Students also demanded that all tests scheduled for the week be cancelled, to which Phakeng agreed. But students heard that some tests were still taking place and said they would be disrupted.

A formal list of demands was read out which included: stationing CPS officers at UCT bus stops, background checks on CPS officers, stricter access controls to campuses, better education and awareness about rape, rape whistles and pepper spray for all students.

Students mobilised using nine whatsapp groups called UCT Safety for Women (multiple groups had to be used because WhatsApp has a maximum of 256 members per group). The conversations on the groups gave rise to the #JusticeforNene hashtag. Students were instructed to wear black as a symbol of mourning Mrwetyana’s death and urged to participate in Tuesday’s protest.

After the meeting at Bremner Building, a night vigil for Mrwetyana was held on the Sarah Baartman plaza. 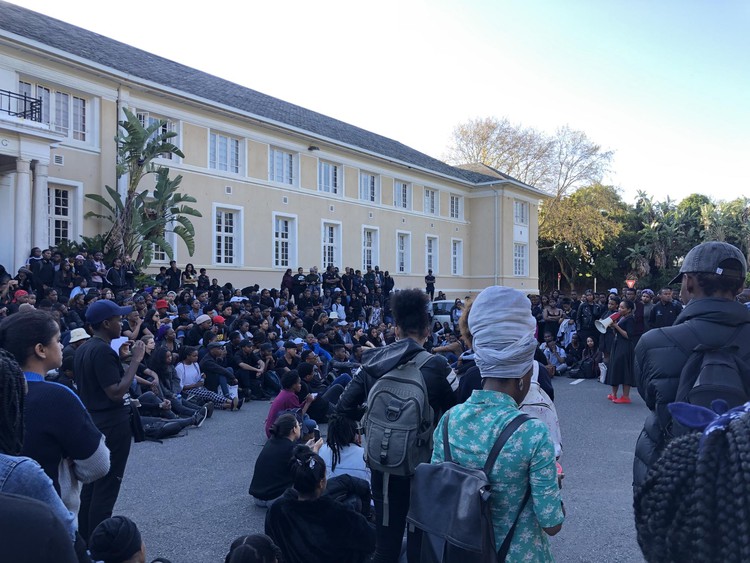 Next:  Witness identifies accused number one in Glebelands attack