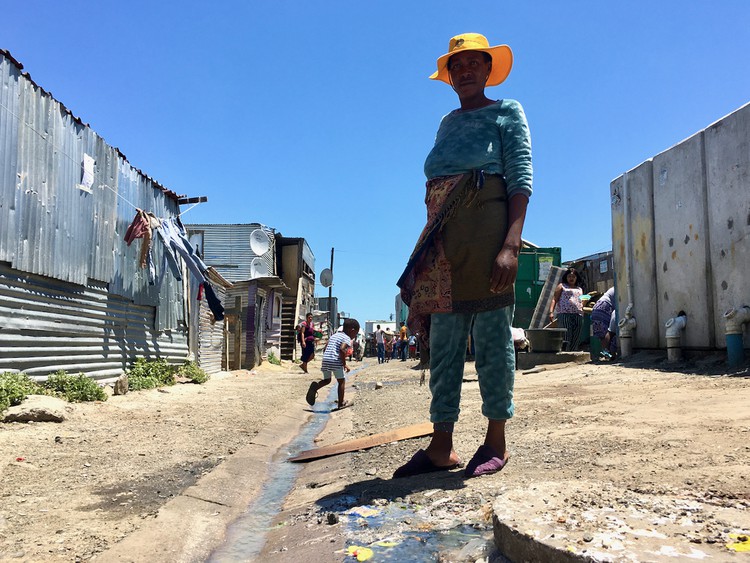 Sandiswa Dayimane, resident in Ethembeni, blames the squalid conditions in the informal settlement on a lack of services from the City of Cape Town. Photo: Peter Luhanga.

The City of Cape Town has failed to “adequately address the appalling unhygienic conditions in Dunoon township which is affecting the health and well being of residents and causing significant pollution and or degradation of the environment”, according to a pre-directive from the Western Cape provincial government.

An investigation by the province into “allegations of pollution and degradation” in three Dunoon informal settlements started on 2 September.

In August, GroundUp had written about raw sewage flowing through Ethembeni informal settlement.

Following the investigation, the Western Cape environmental affairs and development planning ministry issued the City with the pre-directive, that is a notice of intent to issue a directive in terms of the National Environmental Management (NEMA) Act.

The pre-directive, which Mayco Member for Water and Sanitation Xanthea Limberg confirms she received, was leaked to GroundUp. It contains images of blocked toilets with faeces bubbling over toilet seats, grey water contaminated with raw faeces at communal taps, and sewage flowing into stormwater drains between shacks.

NEMA makes provision for the criminal prosecution of officials and the pre-directive states that it is an offence to unlawfully and intentionally or negligently commit any act or omission which causes significant pollution or degradation of the environment.

“As such you [the City of Cape Town] are hereby given notice of the department’s intention to issue a directive in terms of section 28 (4) of the NEMA which will direct you to: immediately repair all the blocked toilets in the area by replacing faulty infrastructure; fixing blockages and leakages; provide toilets to accommodate all the inhabitants in the area … provide an operation plan to deal with the waste management issues around the Dunoon township such as the ad hoc illegal dumping sites. The operation plan must include proactive measures such as recycling and clean up projects,” the pre-directive states.

The City was given seven days to submit time frames for the respective cleanup operations, inspection and maintenance of the stormwater canals, toilets, standpipes and solid waste removal service in the area. The schedule also had to indicate the time and days when each of the aforementioned services would be conducted. Further, the City must submit to the department proof of services rendered within 30 days of receipt of the pre-directive.

Failure to comply with a directive can result in a fine of up to R10 million or imprisonment of up to ten years, or both.

Approached for comment on 5 November, Limberg said the City responded to the pre-directive advising that it denies transgressing NEMA.

Limberg said the response outlines ways in which it has worked to provide solid waste, water and sanitation, and stormwater services in Dunoon, and continues to do so.

“Section 28 of NEMA is directed at persons or entities causing pollution. The City has a service delivery obligation but is not itself the cause of the pollution. The City continues to demonstrate commitment to providing services to residents in this increasingly densely populated area,” stated Limberg.

“The Department is currently reviewing the response and the process is ongoing. Therefore we cannot comment further at this stage,” said Van Jaarsveldt.

Meanwhile, residents in Ethembeni informal settlement say their living conditions have not improved.

Community leader Sandiswa Dayimane, who shares a two-roomed shack with her brother-in-law, said the City had now employed two workers through the Expanded Public Works Programme (EPWP). They only work on weekends and are expected to cover the whole area. They have made little impact.