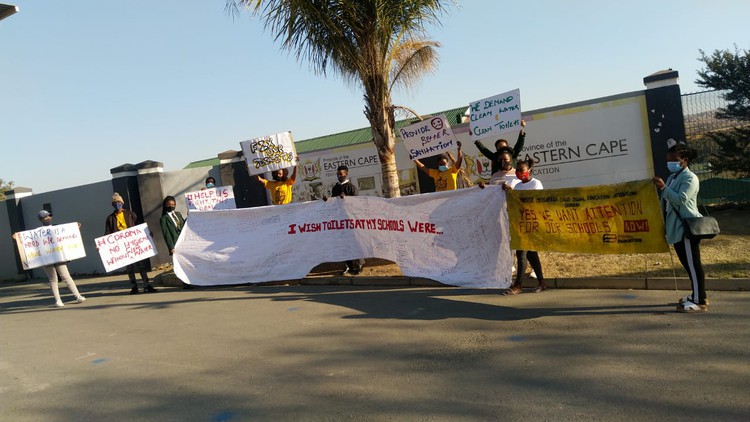 Equal Education members and learners picketed outside the Eastern Cape Department of Education’s offices in Zwelitsha to demand that water and sanitation problems at their school be fixed. Photo: Supplied

Equal Education in the Eastern Cape has given the provincial Department of Education two weeks to attend to schools with water and sanitation problems.

On Tuesday, EE members picketed outside the department’s offices in Zwelitsha to demand that it supply water and sanitation, address overcrowding and ensure that schools are supplied with adequate building materials.

Equal Education told GroundUp that there are schools in the province not ready to open during the Covid-19 pandemic due to lack of toilets, water and personal protective equipment. They said the department must fix these issues before schools allow more learners to return.

In the memorandum handed over to officials on Tuesday, EE listed at least ten schools in desperate need of toilets, among other things.

Gcina Mtya, a matriculant from Qonce High, said the lack of textbooks and toilets made learning difficult. “Our taps are often dry for two days a week and there are no alternatives like water tanks. This forces students to wait until after school to relieve ourselves and that is not fair,” said Matya.

“Another issue is overcrowding. Most of the time our periods clash, then learners are forced to choose which subject to attend. If you miss a class, the teacher is not going to repeat the lesson for you. Those are some of the things we want the department to look into,” said Matya.

Nande Mbukushe, a grade 11 learner from Ndimbaza Central High, said his school had a lack of Covid-19 protection with blocked toilets and intermittent water supply.

Mbukushe said on Monday he was at school but teachers sent learners home because toilets were dirty and protective equipment had not yet been delivered. “For the past three years I have been marching to the department but our cries seem to be falling on deaf ears,” he said.

According to a statement by the department on Sunday, 4,726 of 5,253 schools in the province are ready to welcome more learners back to school. The department said only 5% had infrastructure and water issues.

EE organiser Itumeleng Mothlabane said, “We do not know why the department’s numbers keep changing. We want the department to fix the issues we have raised in our memorandum.”

The memo was handed over to Deputy Director General Ray Tywakadi. Tywakadi promised to respond to EE within 14 days.