“We are not evicting the residents, we are relocating them” says councillor 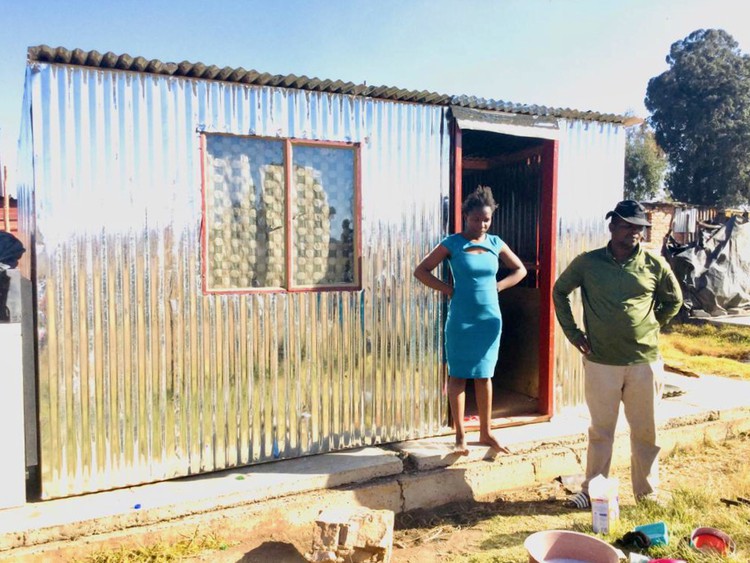 Siphamandla Nxumalo and his wife, Sisanda, refused alternative accommodation in Duduza offered by the SANDF after they were evicted from their bungalow at Marievale Military Camp. They are now living in this small shack erected by the army in Happiness Village. Photo: Kimberly Mutandiro

Lawyers for Human Rights (LHR) has condemned attempts by the South African National Defence Force (SANDF) to forcefully evict residents from Marievale Military Base and Happiness Village during the Covid-19 lockdown.

Ten families were evicted in the early morning of 20 May from their bungalows in the Marievale Military camp. Seven of them are currently living in a “temporary” settlement prepared by the army and the Gauteng office for Human Settlements in Duduza, Nigel. The other three families refused to take the accommodation and went to their old homes in Happiness Village.

Happiness Village was formed by people who were evicted from Marievale in November and December 2017. A year later the Pretoria High Court ordered the SANDF to re-accommodate them as the eviction was unlawful. The SANDF appealed the decision but lost.

On 21 May the residents were in court and a temporary order was obtained to stop the evictions. The matter will be back in court on 9 June.

”In spite of a series of court orders against the Minister of Defence and the SANDF, the SANDF has once again shown that it has no regard for the rule of the law in their latest attempts to forcefully and unlawfully evict the residents of Happiness Village during the Covid-19 lockdown,” said Thandeka Chauke of LHR.

She said LHR is currently engaging with the City of Ekurhuleni to negotiate a proper relocation plan.

“In terms of what can be deemed adequate alternative accommodation it should be the same or better than their living conditions prior to the original evictions [at Mairevale], and it should be dignified accommodation. Another important factor is whether relocation is even a good idea under the lockdown,” said Chauke.

Ziyanda Nwazi said she and her family were fast asleep when they heard banging on the door. She had barely opened the door when soldiers pushed into the bungalow and ordered her, her husband and their two children to get out.

“When l asked them why they were evicting us without going through our lawyers, they ordered me to be quiet,” said Nwazi.

The soldiers loaded her belongings onto a truck. She fled with her children to their old home in Happiness Village. Her husband was taken to Duduza.

A week later he joined her at Happiness Village.

Nwazi says she and the other residents had no freedom while living in the bungalows at the military camp, but they endured it because at least they had a home.

“The army treated us like bandits, we were not allowed to use camera cell phones. Relatives who came to visit us were searched first before entering the premises. We had a curfew and were ordered to switch off our lights at 10pm. We complied, because for the first time in a long time we had a real home with electricity. Now we are back to square one,” says Nwazi.

“The accommodation in Duduza is nothing like our old homes [in Happiness] or the bungalows [at Marievale]. There was no water or electricity,” said Nxumalo.

“I’m surprised that everything the army has been doing to us from 2017 to date would happen in a new South Africa where everyone is supposed to be free. They continue to toss us around as if we are not human beings. Its unfair,” he said.

The army erected shacks in Happiness Village for the three families who refused to stay in Duduza, but the families are not allowed to extend these shacks. Some of the families’ belongings therefore stand outside.

Chris Koitsioe, Happiness Village community representative, said, “They [SANDF] continue to intimidate our residents just to scare them into accepting unlawful eviction … They have not been following proper procedure by going through our lawyers or the court. They should give us adequate accommodation as ordered by the court.”

Mayco Member for Human Settlements Lesiba Mpya said: “We as the City of Ekurhuleni have teamed up with the SANDF to provide accommodation for the Marievale residents … We will be opposing that court order [of 21 May], because we are not evicting the residents, we are relocating them and awarding the dignity they deserve.

“The accommodation we are providing in Zamani informal settlement in Duduza is to prepare them for a housing project earmarked for John Dube in Duduza in two years to come.

“While they are waiting we will provide them with services such as water, electricity and toilets. However, proper government procedure will be followed in the allocation of houses. The people have to meet the requirements to qualify for housing.”

At the time of publication we had received no response to questions sent to the SANDF on Tuesday 2 June.

On Friday 12 June we received the following from the SANDF:

There was no intimidation to members staying in the bungalows. The Department of Human Settlements has taken over the responsibility of relocating members. The SANDF does not have mining interests in Happiness Village, however the land adjacent to Marievale Military Base is Department of Defence land as per demarcation by National Department of Public Works. Nobody was threatened or evicted by SANDF members and there are only soldiers staying in the houses.”