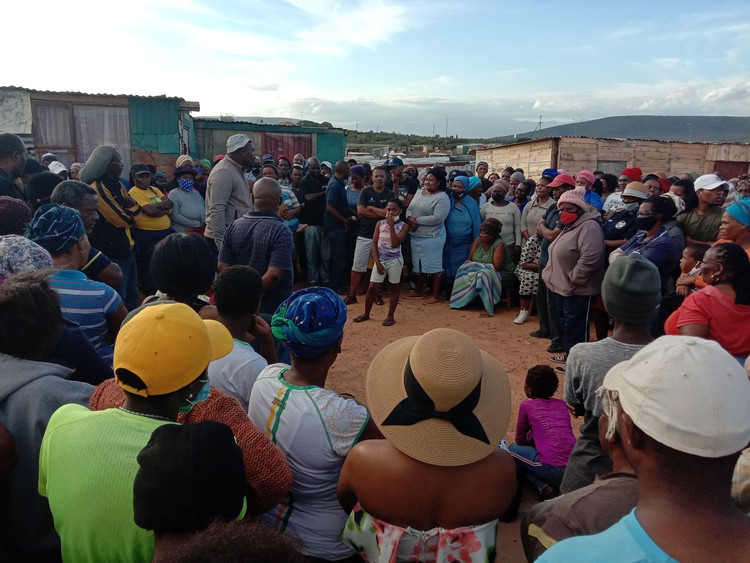 Scores of Area 11 Gunguluza residents in Uitenhage were introduced to a new business forum on Monday. The group plan to bid for massive tenders as sub-contractors in the community. Photo: Thamsanqa Mbovane

A group of shack dwellers from Area 11 in Gunguluza, Uitenhage intend to submit tenders on several multi-million rand projects in the community.

Area 11 is part of Uitenhage’s largest informal settlement, with over 3,000 shacks.

Late on Monday, nearly 200 shack dwellers gathered on R Alexander Street where 12 people were introduced as a new community business forum by Area 11 committee chairman Luyanda Manyamu. It was explained that the members of the forum all have previous work experience as electricians, plumbing and road works.

There are currently three business forums in the community who expect to bid for contracts as sub-contractors to build informal houses, toilets and paving or roads.

Resident Luvuyo Ntombana is one of the 12 members of the new forum. He told the crowd: “Nothing about shack dwellers without involving shack dwellers, especially in business. We intend to take part as sub-contractors in all tenders because we have registered companies. We seek to create jobs, build homes by ourselves, plough back to the community. Other people who have been doing business here never ploughed back and have no intentions to do so.”

Ntombana said the two other forums in the area were currently sharing 30% of the contract to build 846 toilets in Area 11. He said their forum would pursue the construction of 500 informal homes.

Ward 45 Councillor Siphiwo Plaatjies confirmed that the municipality’s policy on tenders is that construction companies who are awarded tenders above R1 million must give 30% of the project to local businesses as sub-contractors. At present only the main contractor for the toilet project had been appointed, he said.