The library has been closed since the start of the pandemic 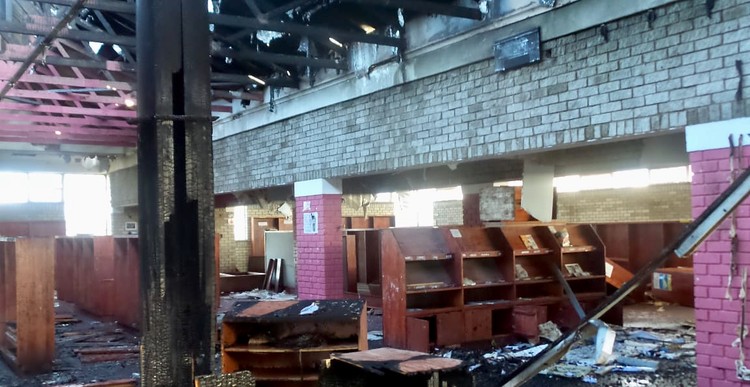 The Motherwell library in Gqeberha was gutted by a fire on Wednesday. Photo: Joseph Chirume

For the second time this year there has been a fire at the Motherwell Library in Gqeberha. A fire on 9 May caused extensive damage. A fire on Wednesday gutted much of the interior and destroyed the roof.

The causes of the two fires have not been ascertained. The municipality says it is awaiting a report from the fire service.

The community have been asking for the library to be refitted and reopened ever since it was shut at the start of the Covid pandemic. While it was closed, the library was extensively vandalised. Residents near the library said the building had been left unguarded.

Bassie Kamana, Mayco Member for Arts and Culture, said the municipality had been busy assessing refurbishment of the facility after the previous fire. A new assessment would now have to be done, “just delaying everything”.

He said “our residents continue to vandalise and steal from our facilities”, and he described the vandalism of the library as part of a “self-destructing culture”.

Kamana said the municipality could not provide security guards as the library had no doors, electricity or ablution facilities.

Mamela Ndamase, spokesperson for Nelson Mandela Bay, said the municipality could not provide security at all its facilities because of budget constraints.

A resident who lives near the library said that children used to use it and there was free internet access. The municipality “should either demolish the facility or rebuild it from scratch and then provide security guards”, she said.