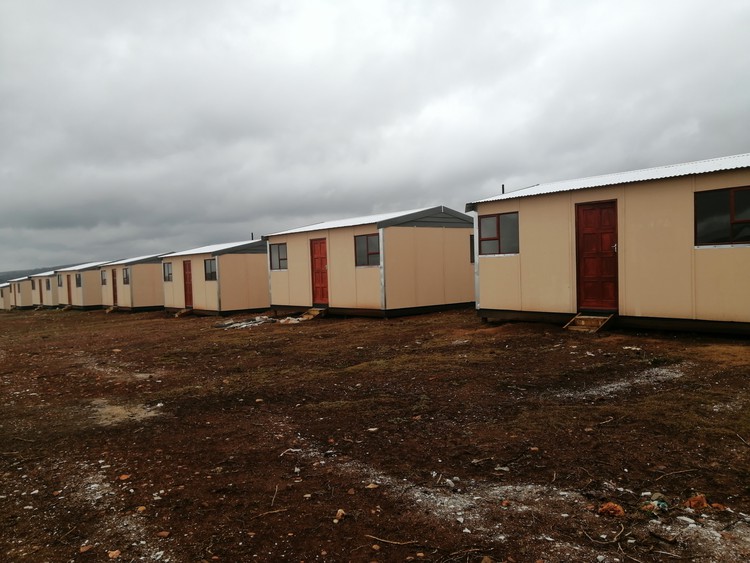 Some of the completed prefabricated structures in Jaagvlakte, part of the Nelson Mandela Bay Municipality project to move people from overcrowded informal settlements. Photo: Mkhuseli Sizani

A feud between the Nelson Mandela Bay Municipality and residents of Vastrap and Qunu informal settlements has blocked a project to relocate hundreds of beneficiaries — mostly elderly and disabled people — since January.

There have been several violent protests since Minister of Human Settlements Lindiwe Sisulu’s announcement in April 2020 that overcrowded informal settlements would be made less dense and people would be relocated to areas with water and toilets. Another project to relocate informal settlement residents was already underway at the time.

During the first phase of the relocation project, residents of Vastrap and Qunu residents tore down their own shacks and rebuilt them at Jaagvlakte. This process started on 27 February after violent protests and ended at the end of July last year, dragged out by fighting between various communities and political bungling.

For the second phase, during which 555 prefabricated structures are to be built in Jaagvlakte, the Vastrap and Qunu residents want to occupy all of the homes. But the municipality says the structures are meant to benefit everyone in the metro in need of housing.

Earlier this week, the two communities said representatives were meant to meet with municipal Human Settlements officials about the impasse but the officials did not show up. This angered residents, who at the time were attending the funeral of Jordan Potgieter, 3, who was electrocuted by an izinyoka connection while playing near his home in Vastrap a week ago.

The residents of Qunu and Vastrap believe it is unfair that other people will be moved into the structures at Jaagvlakte because they “have been fighting for housing and services” like electricity for years.

Lebakeng Morakabi, chairperson of Qunu’s committee, said: “We decided to stop the project because the municipality wants to put 70% of the outsiders in these bungalows. We have 1,300 shack dwellers in our area who need to be relocated. We only want outsiders once both Qunu and Vastrap residents have been relocated,” he said.

Morakabi said people are tired of living in deplorable conditions. He said 14 communal taps were leaking and their 64 chemical toilets were shared by at least six to eight families per toilet. He said that in 2018, the municipality had started a project to electrify shacks but the project was never completed, leaving about 40 electricity poles abandoned. “We had to resort to illegal connections because paraffin is too expensive. In 2020 alone, 40 shacks burned down due to izinyoka connections and candles,” he said.

Daniel Makeleni, a Vastrap community leader, said they had agreed with the previous Mayco for Human Settlements Andile Mfunda that the bungalows would be shared equally among the two communities.

“We met on 24 March at Bethelsdorp Police Station and made it clear to municipal officials that no outsiders would be allowed to occupy these sites. They must first relocate all our elderly and disabled as well as shack fire victims from both areas. Then the remaining bungalows can be occupied,” he said.

Makeleni said there were 877 shack dwellers to be relocated from Vastrap, but only 163 had been relocated to Jaagvlakte in phase 1. The rest remained in Vastrap where they continued to struggle with electricity, roads, water and sanitation, he said.

Municipal spokesperson Mthubanzi Mniki said most of the sites had already been allocated to Vastrap and Qunu residents. “The City made it a point that the two areas benefit equally. Sadly, the City had to do that with law enforcement monitoring the process to prevent war between the two communities.

“Now these same communities who previously fought against each other are opposed to others benefitting. In the meeting on 24 March, it was agreed that should there be any priority cases left out before, they will be accommodated first,” he said.

Mniki did not respond to additional questions about the relocation project.