Reclaim the City has the potential to change Cape Town, but it faces many threats

Our view of the Helen Bowden and Woodstock Hospital occupations 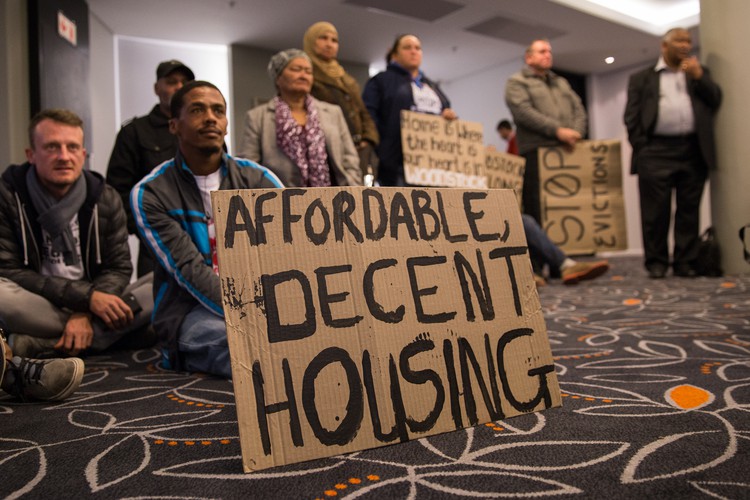 Reclaim the City and Ndifuna Ukwazi members picket at a housing conference in Cape Town in 2017. Photo: Ashraf Hendricks

Reclaim the City’s occupations of the abandoned Helen Bowden Nurses Home and Woodstock Hospital are a high-risk political strategy. The residents face the risk of eviction by the state, which could take place even as you read this. A further threat is attempts to take over or derail the occupation by opportunistic politicians.

But it is conceivable that 20 years from now these occupations may still exist. Or, even better, that Reclaim the City will use the campaign to negotiate permanent, well-run, subsidised rental accommodation for working-class people in or near the city centre and suburbs like Sea Point.

“People feel safe. They can participate in a social movement that restores their hope in a better life for all. The authorities can no longer be dismissive about the dire need for low cost social public housing in the inner city and the surrounding areas. People participate in the management of the occupations of these buildings in order to show that it can be possible to create a better future use of these sites for housing.”

The provincial government — whose sale of the Tafelberg site in Sea Point was one of the triggers of the occupations — has criticised the initiative and may move to evict the occupiers. Yet there is common ground between the goals of the occupiers and the stated goals of Premier Helen Zille.

GroundUp asked Zille questions about the occupations, but she said she could not respond at present because the Province is currently taking legal advice. However, she did respond to these questions: “Is more state-subsidised housing, whether rental or sectional title, near the city centre and in upmarket suburbs like Sea Point achievable? And if so, how do you envisage it being done and over what kind of timeframe?”

She replied, “Yes, of course, on a viable and sustainable model. This requires land parcels of the right size: Culemborg, District Six etc. to make cross subsidisation possible; and it cannot be free housing. It has to be on the model where state intervention seeks to make housing more affordable in well located areas.”

Zille said she could not give time-frames “because inter-governmental cooperation is required”.

She said she had been asking for the release of “key land parcels” from national government since she was Mayor of Cape Town and hoped to meet President Cyril Ramaphosa about “the major well-located land parcels on which we could facilitate the provision of almost 100,000 affordable units.”

Reports of violence at Helen Bowden have been used to undermine the occupation. GroundUp reporters have visited the occupations, especially Helen Bowden, several times. These visits were almost always unannounced, and not “curated” by Reclaim the City as one critic of our reporting has claimed. Our interviews suggest that it is a much safer environment than that from which most occupiers have come.

Most of the people in Helen Bowden hold tenuous jobs and simply want a better life; many are elderly or children. But there are also people with alcohol problems, and there are also chancers and a few thugs. It would be naive to believe that the violence, both political and domestic, that characterises South African society would not also be present in the occupations.

It is in the interests of Reclaim the City to ensure that the occupations do not unravel because of violence. Our investigation suggests that Reclaim the City, with the assistance of Ndifuna Ukwazi, does respond to violence when it occurs.

Reclaim the City may just be the campaign that’s needed to get the state bureaucracies at all levels working together to achieve, in Lucas’s words, an “end to the movement of the working class and poor out of the inner city to the Cape Flats”.

See also: Reclaim the City statement the purpose of the occupations