Over 1,000 new shacks in Eyadini spread over PRASA land 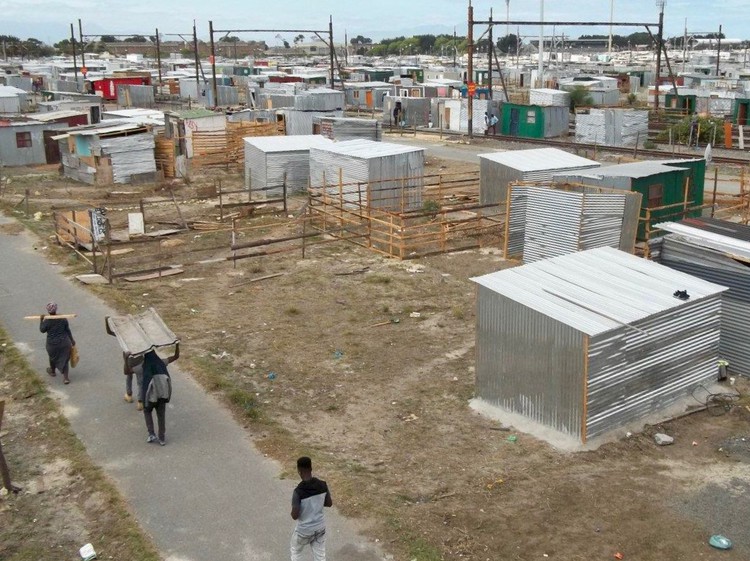 Backyarders from Samora Machel, Kosovo, Marikana, Philippi East and other areas have been flocking to Eyadini informal settlement at Philippi train station to establish themselves. All photos: Vincent Lali

The Eyadini informal settlement on the railway lines in Philippi has shot up as backyarders from Samora Machel, Kosovo, Marikana, Philippi East and other areas flock to the site. There are now 1,000 households.

When GroundUp visited, community leader Phakama Ngolo was spray-painting numbers on new shacks. “We as leaders want to know which shack belongs to whom … If the shack owners are still at work, we don’t put numbers on their shacks until the weekend,” said Ngolo.

Community leader Siya Boyisi said, “At weekends, this place becomes a hive of activity as former backyarders coming in bakkies offload their building materials and noisily put up their shacks.”

The newcomers buy building materials from roadside hardware stalls, many on credit. They first mark out their plots and put up their shacks before introducing themselves and getting registered on the list of Eyadini shack dwellers.

The shacks are now spreading along the railway lines towards Nyanga station. 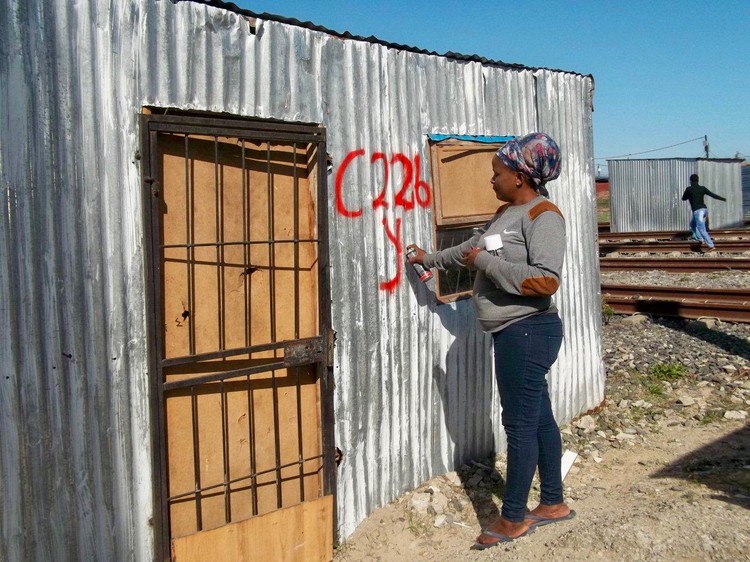 “Some come here because their shacks get flooded … Others leave their family houses because they are too cramped,” said Boyisi. “We delight in staying here as we don’t pay rent. Crime is non-existent and no one has reported a shack burglary or robbery to us leaders.” 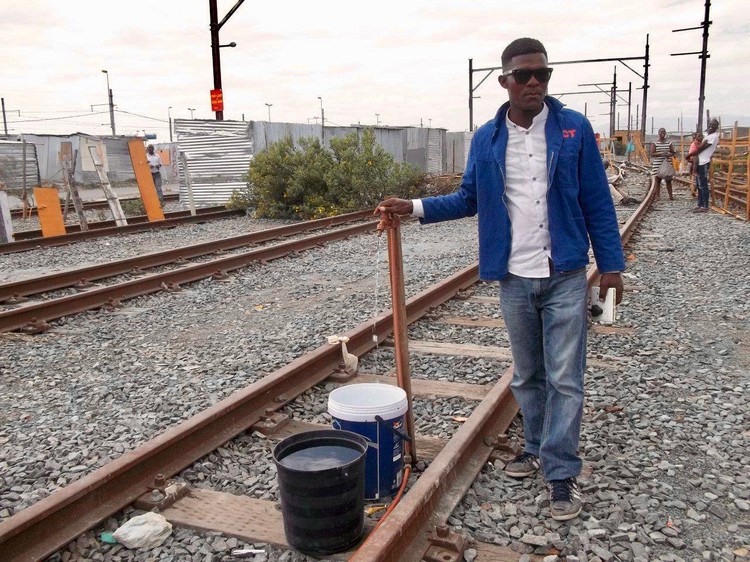 Ayanda Bodla stands next to the tap on the railway line which the community has installed.

The community put together money and set up one water tap two weeks ago according to shack dweller Ayanda Bodla. “After residents return from work, you can see a long queue,” he said.

He said people in nearby Kosovo and Samora Machel don’t want to share their taps as the queues become even longer for them.

There is no electricity, so people use candles and paraffin lamps at night. Bodla said fires have broken out twice since the newcomers occupied the land.

“We are scared to ask the City of Cape Town to help us with building materials to rebuild our shacks because we are staying here illegally,” he said.

PRASA spokesperson Riana Scott said, “The invasion of PRASA land is illegal and dangerous … The disposal of wet waste onto the tracks compromises the underlying rail infrastructure and poses a risk to safe train operations.”

Scott said, “The matter is being addressed by our principals as a matter of urgency in collaboration with various appropriate entities to find a sustainable solution.”

Mayco Member for Human Settlements Malusi Booi said PRASA had turned down the City’s offer to remove the residents earlier this year. 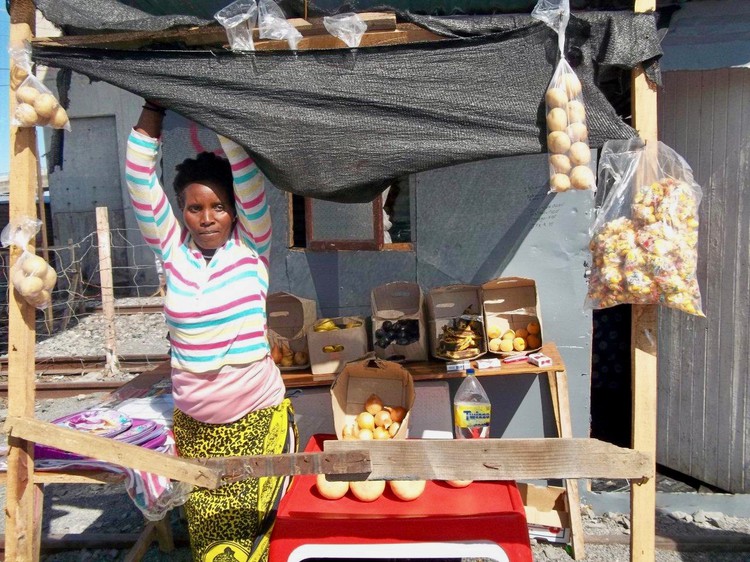 Thandeka Ngxoko lives in a small shack placed on railway lines. She has a fruit and vegetable stand and also sells socks to support her family. She was one of the first to move onto the land earlier this year. 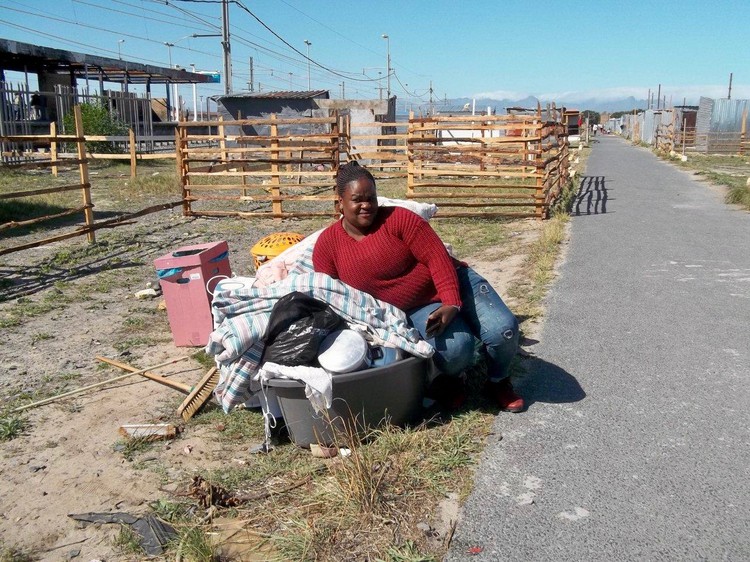 Siphokazi Njemla used to rent a backyard shack for R450 a month in Samora Machel. She lost her job as a security guard in Killarney and had to relocate. “My contract expired and now I have no money for rent,” she said. “I used to walk past here when I go to the station to catch a train and envy the residents for staying here without paying rent.” 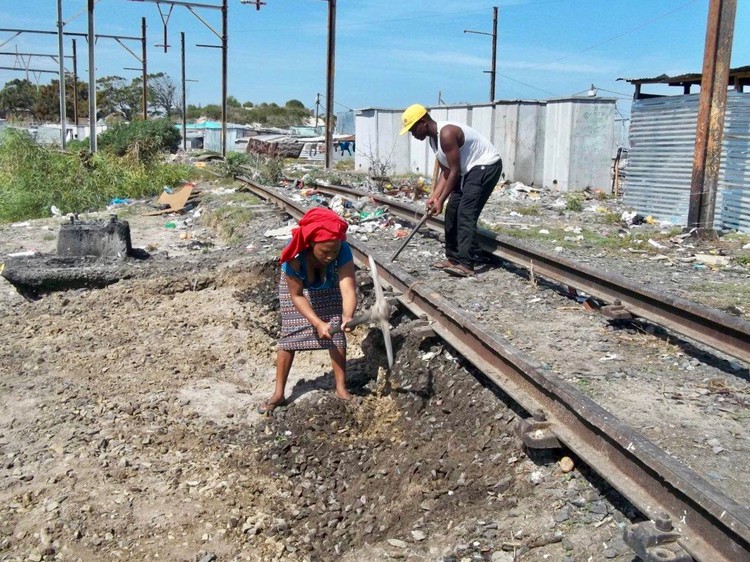 Thumeka Mdingiso and her son level ground for their shack. She said she used to rent a shack in Kosovo for R360 a month. She works as a char in Samora Machel and Kosovo informal settlement, earning R70 or R100 a day. She has to support three children, aged 18, seven and three.