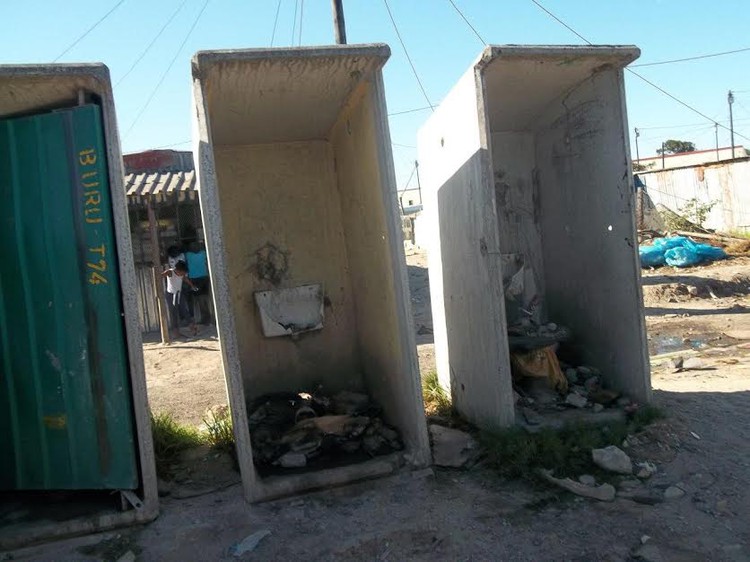 Most of the toilets in parts of Burundi informal settlement are unusable. Photo: Vincent Lali

Most of the communal toilets in parts of Burundi informal settlement in Mfuleni, Cape Town, are blocked and filthy, leaving hundreds of shack dwellers to use three toilets. The City of Cape Town says the toilets are cleaned “seven days a week”. But when GroundUp visited, some toilets had no cisterns or toilet bowls, and others were damaged and filled with human waste.

Nokhemesti Mawuntini lives beside a blocked and damaged toilet. She says the toilets were already damaged when she joined her daughter-in-law and two grandchildren in Burundi in July last year from the Eastern Cape. In her area of the settlement, only one toilet works, and it’s leaking. She says she is too old to walk to other toilets and has resorted to using a bucket which her daughter-in-law and grandchildren empty into a toilet in another area in the morning.

The problem of toilets in Burundi is not new. In 2018 GroundUp wrote about families who had used an open field as a toilet because the communal toilets were broken or filthy - until even the field became too dirty to use.

Happy Nkune says there were enough toilets until more families arrived in the settlement. “We used to use the toilets and keep them locked, but residents who had no toilets nearby broke our padlocks and also used them,” he said. “We used to scrape cash together to buy new pipes and hire local plumbers to repair the toilets. Now they have broken down completely.”

Mpokeleng Mabaleka says her boyfriend tied up the doors with wire to prevent people using blocked toilets. “The other day my boyfriend fixed the toilets and everyone came to use them until they became blocked again,” she said.

Thobile Nolevu also wired up two toilet doors in a block near the shack where he lives with his children. Only two toilets work in the block.

Four children were queuing outside the toilets when GroundUp visited Burundi.

“Residents made a decision to shut down dirty toilets standing near their shacks as they fear for the health of their kids,” said community leader Vuyisani Ntsekeni. He said shackwellers wanted the City to repair the blocked and damaged toilets and to build more toilets for residents.

Alderman Xanthea Limberg, Mayoral Committee Member for Waste and Water, said: “The majority of blockages are caused by misuse of the sewer system, especially when items such as rags, newspapers, condoms and feminine hygiene products are disposed of into the system.”

Limberg said according to the City’s records, 1,722 sewer blockage complaints had been logged in the first two month of this year in the Mfuleni area. “The situation will not be resolved until such time as these items stop being flushed down the toilet. The City attends to failures when they occur but the power is ultimately in the hands of the public,” she said.

Asked how residents should dispose of condoms and feminine hygiene products instead of throwing them into the toilets, Limberg said: “We ask residents to double-bag waste, ensuring it is safely and hygienically secured, before placing it out for collection.”

Limberg said five janitors cleaned toilets in Burundi seven days a week. Asked on 21 April whether the City checked that toilets were indeed cleaned, Limberg said: “the City does not have enough supervisors to provide constant oversight but checks are done every day.”

Asked when the City had last checked on the Burundi toilets, she said: “Yesterday”.