Kouga dam predicted to run dry in July. Other dams to follow soon after 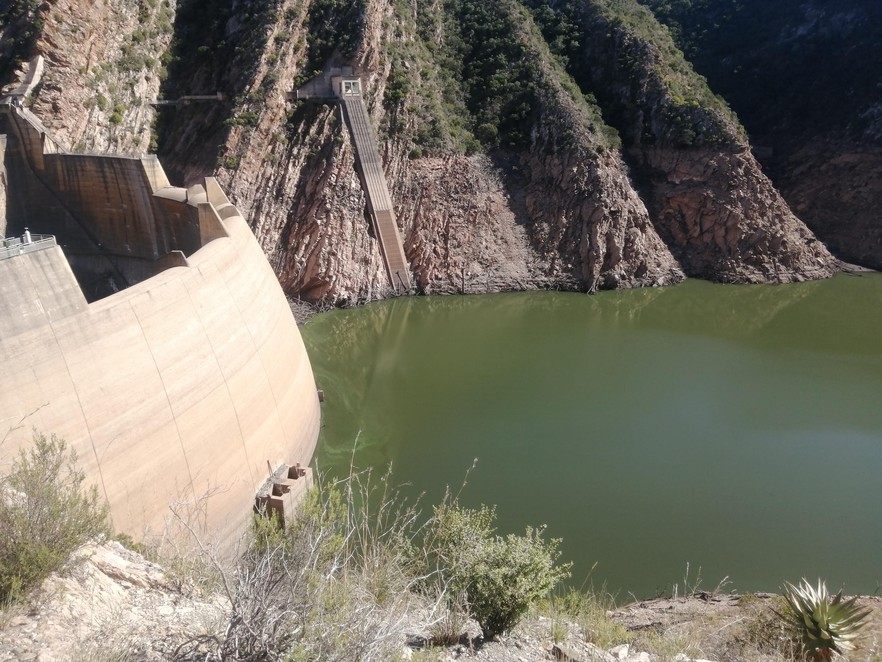 Kouga Dam in Patensie is the largest one serving the Nelson Mandela Bay area. Without significant rainfall, swifter and more effective leak repairs, and reduced consumption, it will run dry in July. All photos: Mkhuseli Sizani

Many residents of Nelson Mandela Bay Municipality (NMB) blame the municipal government for their water problems. They argue that a long-term failure to fix the leaks that flood the townships and informal settlements has contributed to the predicted “Dry July”, when all four of the major dams supplying water to the city may run out of usable water.

“We are acutely aware of the poor state of our bulk water infrastructure,” Bhanga said. He boasted that the loss of water from leaks had dropped from 39% in June to 29% in February. (Cape Town’s water leak loss had been reduced to about 15% during its Day Zero crisis.)

“The municipality is identifying aging infrastructure that needs to be replaced, but this will take time,” said the mayor.

“Water levels at the Impofu Dam are already below that which can be extracted, so the municipality has deployed pump barges to access this dead storage capacity,” said Bhanga.

At 30 April, the combined available supply of the five dams that provide NMB has fallen to below 13%. If no rains fall, the municipality’s largest dam, Kouga, will run dry by July, with the others following shortly after.

Should the dams run dry, the municipality will have to rely on the Nooitgedacht system. The municipality is currently working on rerouting this system to supply the western regions of the metro, as well as converting the Grassridge Reservoir into a temporary water treatment facility and digging boreholes. The Nooitgedacht system draws water from the Free State’s Gariep dam, the country’s largest reservoir. 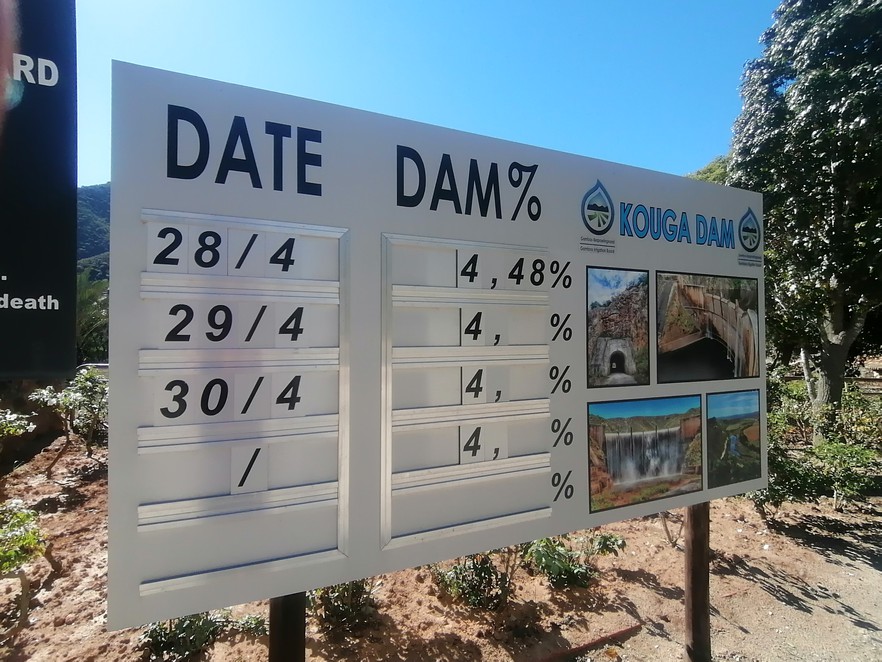 We took a similar photo in September. Then the Kouga Dam level was over 8%. The combined levels of the four large dams has dropped from 19% to 13% since then.

KwaNobuhle in Kariega and the municipality’s western regions such as Seaview and St Albans Correctional Services are projected to be the areas that will be affected first.

We visited KwaNobuhle, Seaview and St Albans informal settlements on 29 April. In KwaNobuhle, outages sometimes start at 8am and last until noon, or occur between 6pm and 7pm. In St Albans residents must use Jojo tanks. For the past two months these have only been filled once a week. 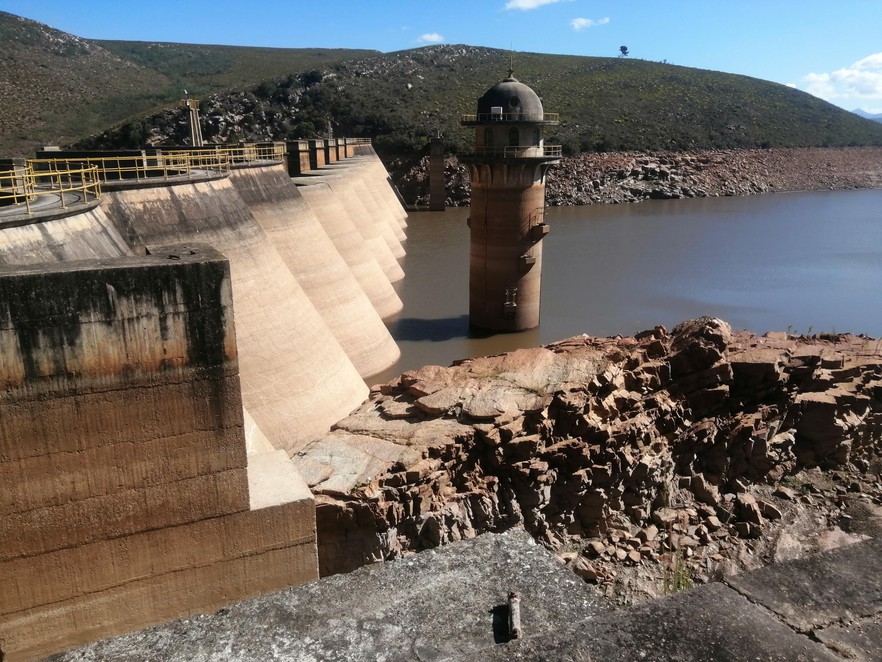 To see how low Churchill Dam in Kareedouw is, compare this photo to the one we took seven months ago (it’s at the bottom of the September article).

Melumzi Mbombo, chairperson of New Rest Informal Settlement Committee in Seaview said, “Our municipality has to be blamed for this water crisis.” He said their drinking water pipe has been leaking for three years. “We reported it several times to the office of the ward councillor but nothing has been done about it. Instead it has become a pond for roaming pigs.”

“A second pipe has also been leaking for more than a year. We are about 300 shack dwellers and we share five stand pipes. Four of them are broken and leaking.”

He said last year they were severely affected by the drought. “For six months between 2019 and 2020 we had no water during the day. The municipality did not even bring the water tankers to us. We were only getting water at night.”

Similar views were expressed by other residents we spoke to. Some also blamed the community itself for wasting water by connecting leaking hosepipes to standpipes. 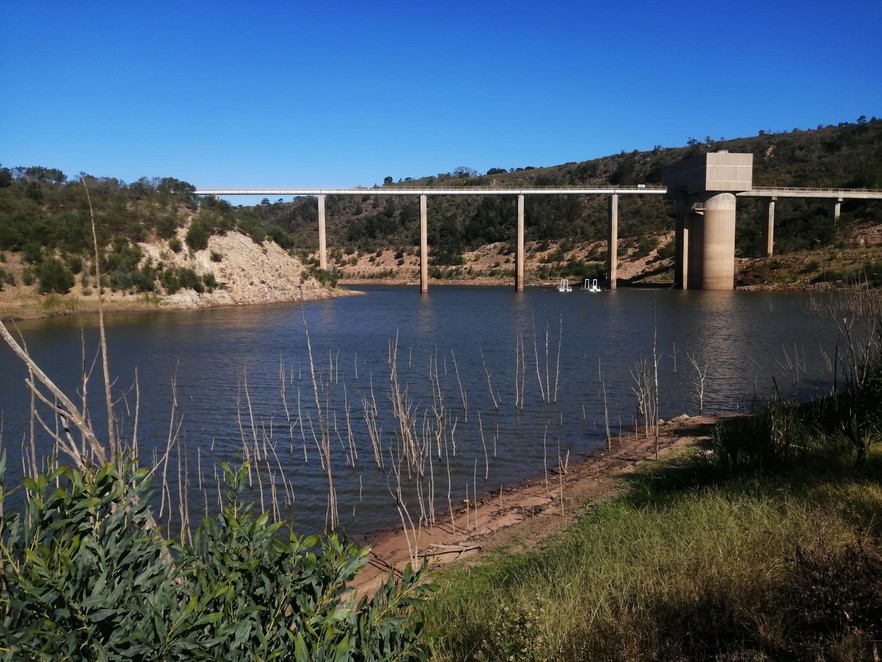 Impofu Dam is so low, water cannot be extracted from it using normal means.

And many residents are short of water already. For example, Linda Windvogel of St Albans informal settlement, said, “For two months our supply has dropped. The water tanker used to come twice a week but now only comes once, and water is quickly finished and we have to go to St Albans Primary and ask for water.

“Some of us make use of rain water for washing. But the rain has also not fallen for quite a while now.”

There have also been shortages in Kariega (Uitenhage) since early April. Resident Nokuthula Bonga said, ”Since the beginning of this month we have had no water during the day … Sometimes our water cuts off at 8am and comes back in the afternoon or at night.”

Fear of running out of water worsens the problem. “Everybody here at night is busy filling their water drums because last year we had no water for about a week and we had to go to the houses lower down to ask for water,” said Bonga. 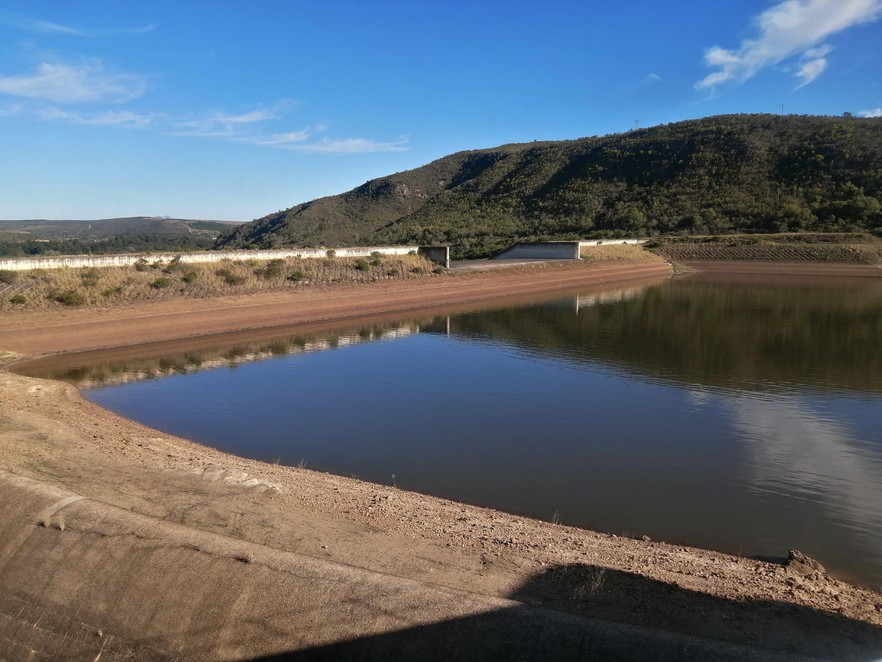 Loerie Dam is the smallest one supplying Nelson Mandela Bay.