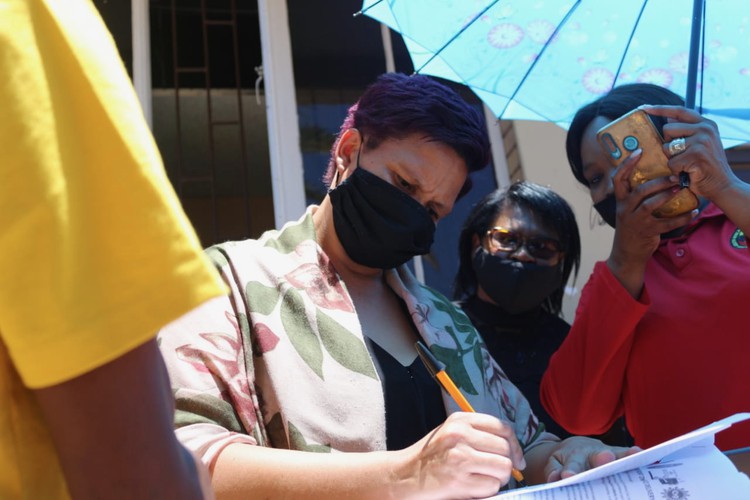 The Dawid Kruiper municipality has failed to keep a promise made to protesters to call a special council meeting to address their concerns about electricity, flush toilets and water.

Accepting a memo from the United Front on Service Delivery on 26 November, the municipal speaker Melanie Dodds said “I will call a special council meeting. We will answer within seven days as demanded by the demonstrators”. But the seven day deadline passed, no response was received and no meeting was held.

In response to a query from GroundUp, municipal spokesperson Patrick Williams said the special council meeting “could not take place because the mayor and the speaker were not available”.

The coalition’s Aaron Ranayeke said the coalition was not surprised that the meeting had not taken place, because of “the deep rooted challenges of being incompetent, lack of leadership and the divisions amongst themselves”.

Instead, Dodds provided a written response to the coalition’s demands on 7 December.

She said surpluses from the sale of electricity were used to fund other expenditure and dropping electricity tariffs would mean either increasing other tariffs - for property rates, water, sanitation/sewerage and or solid waste/refuse removal - or dropping the level of service delivery. According to municipal documents, electricity generates about 44% of the municipal revenue.

She promised the water tanks would be replaced with communal standpipes “by September 2021” after funding was received from the Department of Cooperative Governance and Traditional Affairs. “All communities in the Upington area will benefit through this project implementation.”

On sanitation, she said the “temporary solution” was to provide a bucket “on the basis that a structure must be in place”. She said the buckets were emptied “on a regular basis” but the system was under pressure “due to the quantity of close to 5,000 buckets that need to be emptied” by the municipality. Water-borne sewage system could only be installed if there was funding, Dodds said. “A business plan will be compiled and submitted to the Department of Water and Sanitation” for the next financial year.

Residents with buckets are charged R95 a month.

Michelle Alwyn, who lives in the Gaaitjie informal settlement, has to pay on average R250 a month for bucket and refuse removal. She gets water from a nearby tank. By the end of June she was in arrears of R1,768.35.