Mostly undocumented immigrants live in leaking shacks without sanitation, water or electricity in this small informal settlement in Marabastad, Pretoria. But they say they are happy to be left in peace 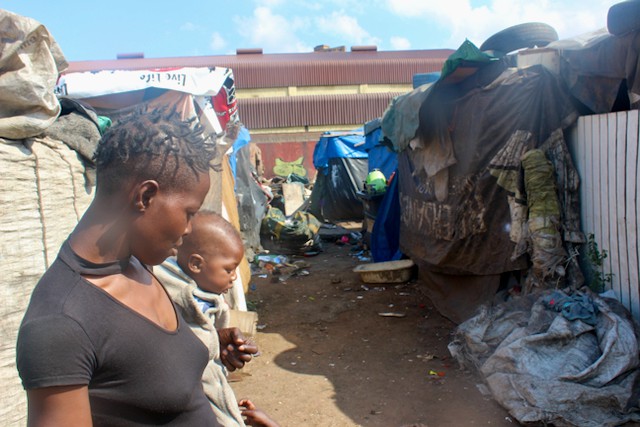 Caroline Chinozvana, 25, says the community of Little Zimbabwe mostly relies on donations, but in order to get food parcels, some organisations require documentation which the residents do not have. Photos: Mosima Rafapa

No toilets, no electricity, no water – not much has changed in “Little Zimbabwe” informal settlement, situated in the busy business area of Marabastad, Pretoria, since GroundUp last reported on the living conditions here in 2019.

However, the 16 or so families, all from Zimbabwe, with more than 35 children, say they are grateful to be left in peace. Metro law enforcement has not demolished their shacks for over a year. Taxi drivers operating in the area, who used to accuse the residents of dealing in drugs like nyaope, have also left them alone.

Elizabeth Musungabe, 26, recalled an attack in September 2019 when taxi drivers torched their shacks, trapping a seven-month-old baby inside one. “We thought he’d die but we were able to rescue him,” she says, pointing to a now two-and-a-half-year-old boy.

Most of the residents are undocumented and many have been in South Africa for a decade at least. Their shacks are made out of asbestos sheets, board, cloth, plastic sheets and tent material. One-roomed shacks are crowded and divided in two for separate families. They sleep on makeshift beds. They cook on open fires. Bushes nearby serve as a toilet.

Many of the children are not registered. “We had documents that we received at a hospital when you give birth, but we lost them during the time they burned our shacks. Some even lost their asylum documents,” Precious Twariki told GroundUp.

Eight of the children are of school-going age. “Previously, four children in the settlement attended a primary school in town. We paid R400 for them and they were allowed to attend without documentation because the owner of the school is Nigerian. Now they’ve stopped going because the fees have gone up. They want us to pay R800 per month. It’s a private school,” says Melody Zimuto. 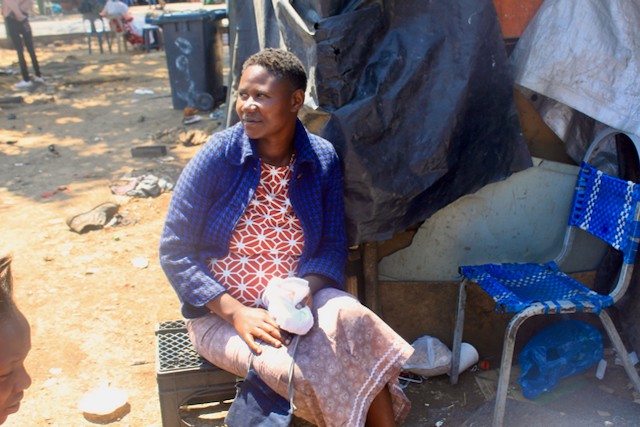 Elizabeth Musungabe came to South Africa in 2012 in search of job opportunities. She survives by asking donations from people and doing piecemeal jobs.

Musungabe moved to the settlement in 2014. She is undocumented and struggles to find work. Originally from Harare, she went first to Limpopo to look for a job in 2012.

“I survive by asking for donations and doing people’s laundry. Our husbands go out everyday to look for material for recycling, so we also rely on that,” she says.

Musungabe has four children and is expecting her fifth.

Tariro Musa, from Rusape town, went to Johannesburg in 2010 to live with her aunt. She moved to the settlement earlier this year after she lost her housekeeping job at a hotel in Arcadia. She had taken maternity leave, but when she returned to work she was told her position had been filled.

“I could not afford to pay rent. I also ask for piecemeal jobs from flats nearby,” she says. She survived for a while by washing cars. She now asks passersby and store owners in town for food. 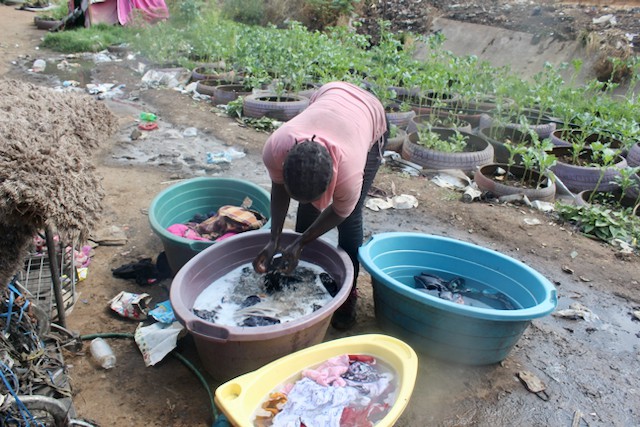 Tariro Musa, 31, came to South Africa 11 years ago. After she lost her job, she could no longer afford to pay rent.

Melody Zimuto was one of the first to erect a shack in the settlement. She says they used to have to share the space with nyaope smokers on one side.

“When it rained, we slept under the veranda of the shops in Marabastad,” she says.

She moved to Little Zimbabwe in 2011. “When they closed the Schubart building, we moved here. We used to pay rent to some people. I think they had hijacked the flats, because we don’t know who owns them. We had no alternative place to go because most of us are poor,” says Zimuto.

Zimuto came to South Africa in 2008 to support her mother who is blind. She survives on piecemeal jobs and sometimes begs for food in town. She has four children.

Caroline Chinozvana (top photo) was only 14 when she came to South Africa from Harare a decade ago. She was orphaned when she was five.

She begs for money at the traffic lights and looks for piecemeal jobs.

Chinozvana says that without an ID the residents struggle to find work or to access social relief programmes.

She sleeps in a small shack with her three children on two makeshift beds. The shacks leak when it rains. “We don’t mind as adults, but we worry about our children,” she says. 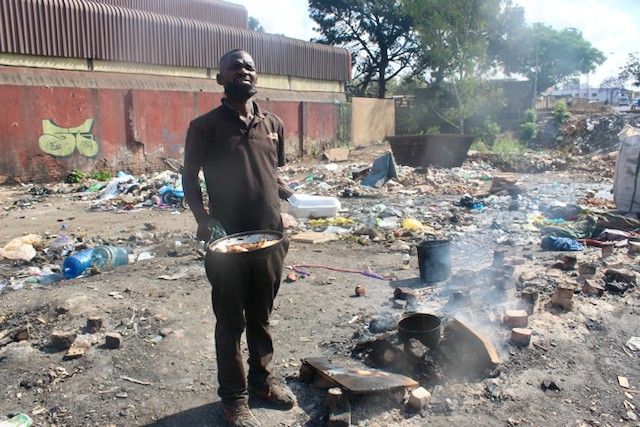 Manners Maphosa says they have no choice but to cook out in the open, in a place where small business owners dump garbage.