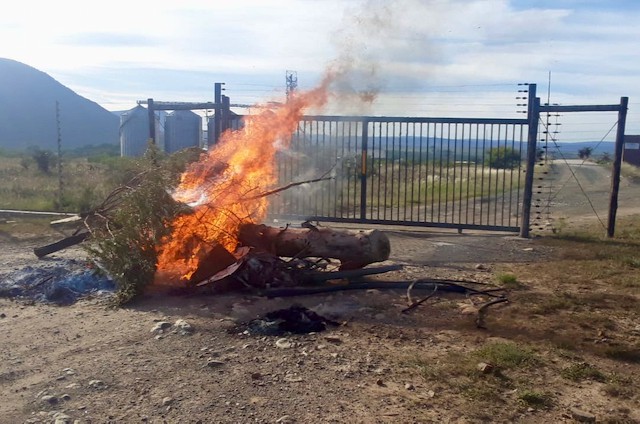 Dismissed workers blocked the entrance to the Humansdorp Kooperasie in Cookhouse with burning trees on Friday. Photo: Mkhuseli Sizani

The shutting down of the Humansdorp Kooperasie by workers over a wage dispute has impacted local farmers in the Cookhouse area of the Eastern Cape.

Farmers told GroundUp they now have to travel to Paterson (90km from Cookhouse) to buy animal feed and it is expensive.

Simphiwe Klass, owner of the Vukuzenzele Farm in Middleton (75km from Paterson and 25km from Cookhouse), said, “This closure is hitting me hard … For two weeks my 100 cows and 400 sheep have no food. We are facing a severe drought and they are losing weight.”

“I wish this strike can be resolved quicker because it is not only me who is suffering. There are about 100 farmers like me.”

Tools were downed at the co-op three weeks ago when seven out of eight food mixers and forklift drivers complained about wage inequality. They said only one worker was paid according his grade; the rest were paid as general workers. The company said the workers signed contracts.

Last Tuesday the mayor of the Blue Crane Local Route Municipality met with the Cookhouse Community Forum and the management of the co-op hoping to resolve the situation.

But the company said all 37 workers had been dismissed and new employees would be hired.

On Thursday, workers shut down the co-op’s fuel station in Golden Valley. Then on Friday, they burned wood at the entrance of the animal feed facility.

Anele Sikhwebu said the company claims it is losing huge sums a day. “We only asked the company for an increase to R28 an hour from R22.50. We also asked them to pay skilled workers a different wage from the general workers. But they never listened to our cries. We have kids to send to school and universities.”

Bhongolwethu Mema, Cookhouse Community Forum Trust treasurer, said, “We feel the pain of the local farmers but these workers also have families to feed. Firing them is not a solution. The company is more concerned about losing millions … but it fails to address the issues of wage inequality. Hence we say no one will be employed there up until these workers are reinstated and their grievances are met.”

Carlé Erasmus, spokesperson for the co-op, said, “So far the amount suffered is in excess of R1 million. Kindly note that is difficult to determine the exact amount. For instance, we lost customers permanently.”

Mayor Bonisile Manxoweni said, “I am still persuading the CEO to reinstate the dismissed workers and resolve this issue amicably. But the CEO sent me a letter on 11 February himself. Management and the company’s board have decided to fire all the workers and restart with hiring of the new staff.

“But that decision is going to impact negatively on the economy of this place and the workers’ families. The area is very poor and has no job opportunities.”

Humansdorp Kooperasie CEO Henk Agenbach said in the letter: “The co-op is aware of what the impact will be of a possible closure on a community at large in Cookhouse. Therefore we are proposing the continuation of our operation. We will be advertising certain positions and give members of the community who meet the minimum job requirements an opportunity to apply.”