Dozens of families spend night outside amid ongoing evictions

“They left us with nothing. I don’t know where I will go now” says Khayelitsha occupier 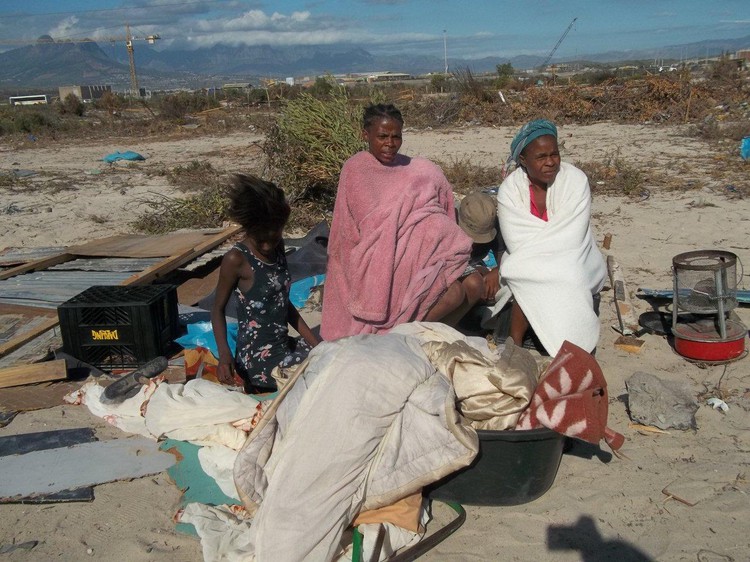 Nolubabalo Mphothulo and Noluvuyo Mdledle with their children, sit huddled around their belongings after their shacks were demolished on Sunday. Photo: Vincent Lali

On Sunday, about 29 households in Zweledinga informal settlement, Khayelitsha, were left out in the cold again when the City of Cape Town’s Anti-Land Invasion Unit and law enforcement officers demolished their shacks.

Last week, nearly 40 shacks were demolished following a court order prohibiting people from occupying the City-owned land. Many of the occupiers, most of whom were backyarders in surrounding areas, rebuilt their homes on the land.

When officials returned to the area on Sunday, beds, blankets, stoves and other household items were seen scattered on the field as people rushed to gather what they could before their shacks were torn down.

Noluvuyo Mdledle, 33, had moved onto the land with her family a day before it was demolished by officials. “I begged them to leave my building materials alone and assured them that I would not rebuild my shack, but they ordered me to vacate my shack,” she said.

She previously rented a shack in Section 32, Makhaza for R600 per month. She sells fruit and vegetables to support her three young children and unemployed sister.

On Monday morning, a visibly distraught Mdledle told GroundUp: “They left us with nothing. I don’t know where I will go now.” Mdledle and her family slept outside with their belongings last night.

Another occupier, Nonkosi Qambela, is a mother of two and previously rented a backyard shack in Samora Machell before moving to the land on Saturday. “The government is giving kids social grants to buy food. How will they get food if I use their money to pay rent?”

Qambela tearfully said: “If they[officials] allowed me to explain why I erected my shack, they might have sympathised with my plight … I slept on the floor [on Sunday night].” She said officials seized all of her building materials worth R800 and damaged two of her buckets.

Sindile Zitasi, 42, was among the group whose shacks were demolished last week. He lost his job as a spray-painter in Woodstock in October last year and relies on piecemeal spray-painting jobs to support his family.

Zitasi said officials removed one side of his shack last week and did the same on Sunday. “I don’t know how I will rebuild the shack and where I will stay as my friends have run out of unused materials [to give me].”

Community leader Simphiwe Madikane said most of the 700 people who had moved onto the land relied on social grants and were backyard dwellers.

Malusi Booi, Mayoral Committee Member for Human Settlements, had told GroundUp that the demolitions were in accordance with a court order. “The City’s Anti-Land Invasion Unit removes unoccupied and unfinished structures in line with the provisions of the law and based on advice from legal professionals,” he said.