COSATU calls for VAT increase to be scrapped 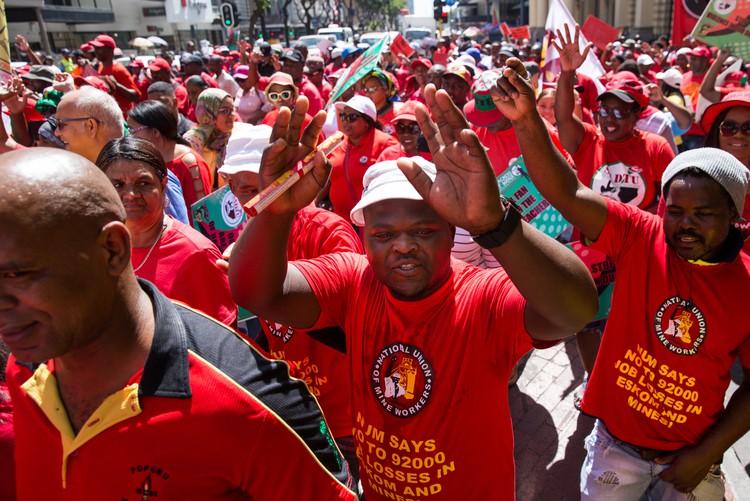 Over 1,000 workers from COSATU-affiliated unions marched from Keizersgracht Street to Parliament on Tuesday to hand over a memorandum in protest against job losses. This followed marches in the Eastern Cape, Limpopo, Gauteng and KwaZulu-Natal on 13 February.

COSATU Western Cape chairperson Cape Motlatsi Tsubane said workers wanted to government to put in place “meaningful measures” to deal with unemployment and retrenchments. They also wanted the increase in VAT to be scrapped.

He said 140,000 people could lose their jobs at struggling retail chain Edcon if the government did not intervene.

Tsubane said job losses were a problem in all sectors, from mining to domestic work and the public sector.

In its memorandum COSATU also calls for an end to state capture, corruption and mismanagement, a ban on labour brokers, and no privatisation of Eskom.

“The message from the workers is simple – we say no to retrenchments, rather protect and create jobs for all,” said COSATU national deputy chairperson Mike Shingange, reading from the memorandum.

“We need interventions that place the creation of decent jobs at the centre of economic policy,” he said. The budget should create conditions for the growth of small businesses which absorbed local labour.

Fundiswa Hohana, a member of SACTWU and a mother of four, who works at a clothing factory, told GroundUp workers were experiencing retrenchments and short-time work.

“I earn about R900 a week as a factory worker, and I still have to support my parents and my children. The money is not enough. But it is even worse during short-time when I have to sit at home with little or no income coming in.”

“We need better job security. We need to be able to support our families. The situation I am talking about is that of many other factory employees, who sometimes go weeks with no salary. Load-shedding by Eskom is not making things any easier,” said Hohana.

Teacher Fezeka Mdlankomo said conditions of teachers in township schools were getting worse. “Teachers are resigning because they can no longer cope with the bad working conditions. We have schools that are broken into and the teachers are robbed at the place where they are suppose to be safe.”

“Everyday is a struggle, but we stay because we love what we do,” said Mdlankomo.

The memorandum was accepted by the Deputy Speaker of the National Assembly Solomon Lechesa Tsenoli and the Executive Director of the Western Cape Chamber of Commerce Sid Peimer.

Tsenoli said he would pass on the memorandum to the relevant people who would respond to the issues raised by the workers.