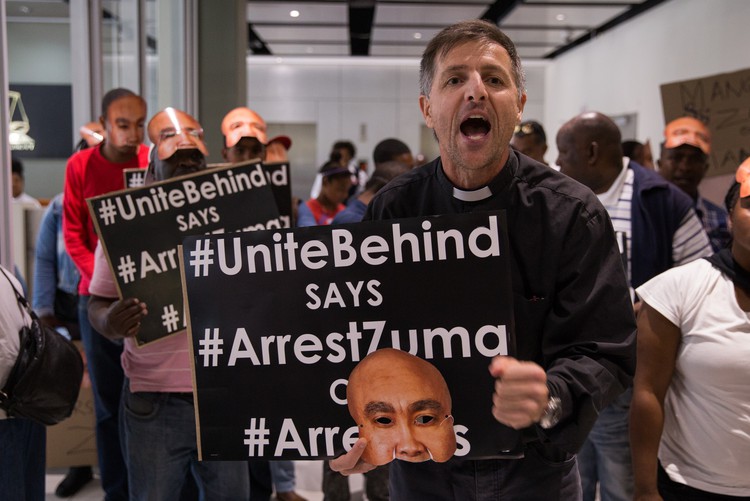 UniteBehind activists occupied the NPA, demanding that President Jacob Zuma be arrested. Reverend Alan Storey is at the forefront of the photo. Photo: Ashraf Hendricks

The #UniteBehind Coalition, led by veteran UDF members, started civil disobedience on Wednesday. Members of the group occupied the National Prosecuting Authority (NPA) and demanded: Arrest President Jacob Zuma or arrest us. They refused to move and eventually, after several hours of an ensuing standoff, police arrested eight members of the group.

The event started when several dozen people marched from the Methodist Church on Greenmarket Square to the NPA in the afternoon. They entered the NPA holding banners and shouting slogans. About 20 people in the group then sat down, occupying part of the building. They demanded a warrant for Zuma’s arrest. No one from the NPA addressed the group.

UDF veteran Zelda Holtzman told GroundUp: “We are gathered here because of the seriousness of the situation, resulting from the effects of corruption.” She cited the dire situation on Metrorail trains as an example of the consequences of corruption. She lambasted NPA head Shaun Abrahams for failing to act against Zuma. How can the president sleep at night, she asked. “He is pocketing money that should go to [Metrorail] security upgrades.” She said that while Abrahams was sleeping, people were dying. “That is why we’re here today, to wake him up!”

The police arrived and attempted to negotiate with the group, telling them that neither Zuma nor Abrahams were in the building. The group still refused to move, saying they merely wanted to see the warrant for Zuma’s arrest.

Police appeared reluctant to arrest the group, but NPA officials were adamant that they be removed. The occupation ensued for about three hours, before police ushered reporters out the building, and then arrested the remaining eight occupiers. The eight are Holtzman, June Esau, Naeem Frances, Zukiswa Vuka, Alan Storey, Zackie Achmat, Benson Ngqentsu and Sipho Citabatwa.

The eight were taken to Caledon Square Police Station. The police wanted the group to post bail after which they would be released. However, the group refused to post bail. At the time of publication it is understood that the police intended to release the group without bail, and a warning that they must attend their court hearing. They have been charged with trespassing. (UPDATE: As of 5am Thursday morning, the eight protesters had not been released.)

Shortly before being arrested, Achmat called upon all people in South Africa to “give up their fear” and go to police stations on 30 November. He called upon everyone to explain to the police that they must do their job. He also called for Abrahams to be arrested for obstruction of justice. See the video below: