Woman has waited seven years in cold, leaking shack for builders to finish her RDP house

Noxolo Bhayi has been living with her children in a leaking shack for almost seven years while she waits for the City of Cape Town to finish the construction on her RDP house in Sika le Khekhe informal settlement, Khayelitsha. Her current landlord is unhappy sharing his yard and says he needs it back.

Bhayi said she moved into the shack in 2012 after City officials told her to move from her plot while they built her RDP house. “I hurriedly put up the shack in one day and moved in with my kids without bothering to make it comfortable, because I thought we would stay here for a few weeks,” she said.

The City says a People’s Housing Process contractor went into liquidation and left a number of units incomplete.

She has to cover her bed and furniture with plastic sheets on rainy days.

“The owner of the yard doesn’t make me pay rent, but he expects me to top up electricity when it runs out,” said Bhayi. She said she battles to find the R200 needed each month for electricity.

Bhayi says her landlord refuses to allow her to repair her shack and make it more liveable.

“When I try to fix the shack, the landlord thinks I have no intention of finding my own place,” she said.

Sometimes he pressurises her to go to the City and speed up the process.

“While I was fixing the shack the other day, I heard him wonder aloud when I would leave,” said Bhayi.

She says people are dumping rubbish at her RDP house while it stands unfinished. “Thugs smoke tik [here],” said Bhayi, angrily pointing to old blankets and trash strewn around the floor.

She works as a cleaner in Pinelands for R120 a day on Fridays and Mondays. “I have no money to buy building materials to finish building the house, so I want the City to complete it,” said Bhayi. 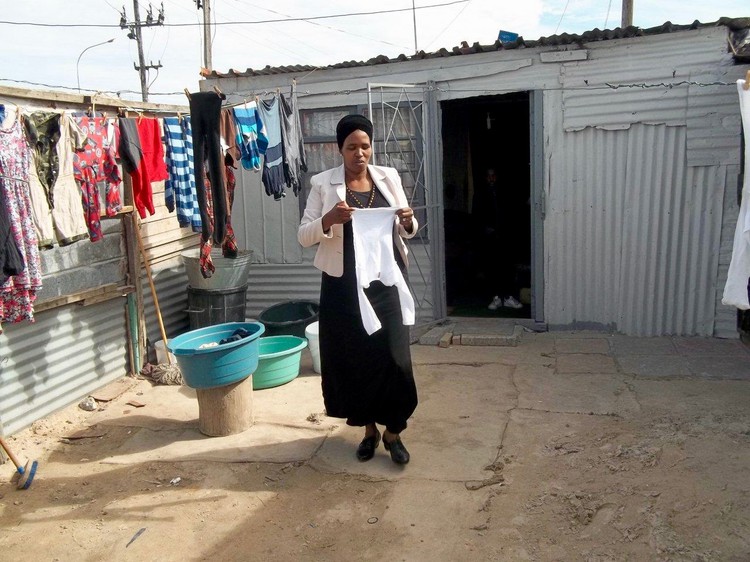 Noxolo Bhayi shares her yard with two other backyarders. Her shack is smaller than her original shack.

Andile Gxeke, her landlord, said he used to have a fruit and vegetable stand in his yard but had to dismantle it to create space for Bhayi’s shack.

“When I removed my stand, I thought that her house would be finished within a month and that I would be able to rebuild it soon after she has left,” he said.

Gxeke, who stays in a shack attached to Bhayi’s with his wife and his one-year-old daughter, said, “I want her to leave so that my wife can use the space to sell fruit and veggies to supplement my income … Since I no longer sell fruit and veggies, I battle to survive and send money to my family in the Eastern Cape.”

Gxeke said he works as a construction labourer in Constantia. “Money often becomes tight these days as winter rain pours continuously and prevents me from working.”

“My electricity box often breaks down because it can’t supply both of our families with electricity,” he said. “When the box trips, her kids step on my bed and mess it up before they reset the switch. Now I no longer leave my keys behind when I go to work,” he said.

A local resident, Nomxolisi Nani, said thugs hid in the unfinished house and burned copper wires to sell to scrap dealers. “In November last year, I and other residents put out a fire inside the house after thugs set rubbish and copper wires alight,” she said.

Next:  Women and unemployed young men dodge trains to scavenge for coal

“The City needs to stop destroying shacks, at least until the lockdown is over”

Protesters bring road project to a halt in KwaNobuhle