Some Durban flood victims have been moved four times 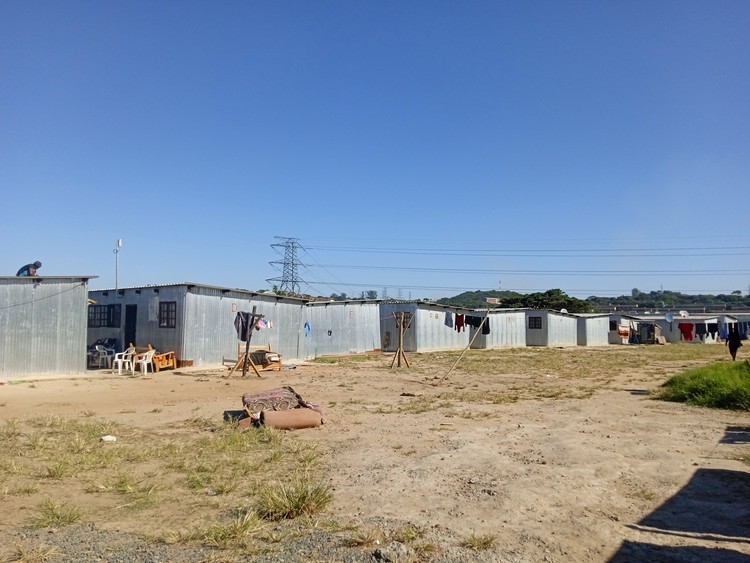 More than 100 households have been living at this temporary relocation camp in Lamontville, Durban, after their homes were severely damaged by flooding. Photo: Nokulunga Majola

It’s been nearly two months since floods wreaked havoc in eThekwini and other parts of KwaZulu-Natal, killing over 400 people and leaving thousands homeless.

This week GroundUp visited families who have been living at a transit camp on Gwala Street in Lamontville, Durban. For most of the people here, this was their fourth major flooding disaster.

In 2012, they lost their homes and belongings at Mega Village informal settlement in uMlazi. There they were flooded again in 2016. Then during floods in April 2019, they were evacuated from their homes and lived in tents at Tehuis Hostel until February 2021 when they were moved to Lamontville, where they were hit by floods again this year.

Residents say that when they first moved to the transit camp they had no water, toilets or electricity. One standpipe tap and 16 portable toilets, shared by over 100 people, were eventually installed.

Some of the shacks in the camp are very close to the uMlazi river. One resident who did not want to be named said during the recent floods, the river had burst its banks and residents had to move, leaving behind most of their belongings.

“Children lost everything and had to go to school with clothes donated by others,” said the mother of two. “Most people living here are unemployed. We haven’t seen anyone coming here to assist us with food or anything.”

Another resident, a 47-year-old mother of three, who lives with two grandchildren aged seven and four, said life was better at the tent than in the transit camp. “At the tent we were given food and vouchers but ever since we moved back here, we haven’t received anything. We have been moved from one place to another and we are tired now,” she said.

Responding to questions from GroundUp, eThekwini Municipality spokesperson Msawakhe Mayisela said complaints about ablution facilities had been reported to the relevant unit for investigation. Mayisela did not respond to other questions.

Next:  Struggle activist denied his pension