The City’s former employees want employment contracts, not the compensation awarded to them by the Labour Court 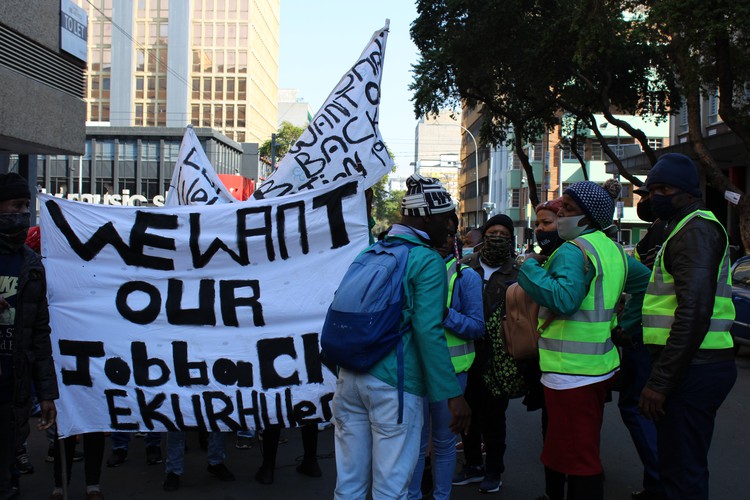 Former municipal workers picket outside the Labour Appeal Court in Johannesburg on Tuesday. They are demanding that the Ekurhuleni Metropolitan Municipality reinstate and employ them permanently. Photo: Masego Mafata

About 150 former municipal workers picketed outside the Labour Appeal Court in Johannesburg on Tuesday.

The picket was in support of a case in which the workers are demanding that the municipality reinstate them instead of compensating them, as ordered by the Labour court .

“We don’t want money, we want jobs. We need this work to support our families,” said Lawrence Madonsela, a former municipal worker and member of the Simunye Workers’ Forum.

The workers were first employed by Ekurhuleni municipality under a job creation programme called Lungile Mtshali Development Plan Project in 2014. They were employed to clean the streets, drains, old age homes, municipal buildings, cemeteries and parks.

However, shortly before their contracts ended in 2015, the workers approached the South African Local Government Bargaining Council and requested permanent employment from the municipality. The workers were represented by the Lawyers for Human Rights (LHR).

The municipality terminated the workers’ contracts in June 2015. A few months later, the workers were hired by a company called Hlaniki Investment Holdings (Hlaniki) to do the same jobs that they had been doing for the municipality.

Frustrated that they were outsourced rather than given permanent jobs, the workers returned to the bargaining council where they argued that Hlaniki was acting as a Temporary Employment Service (TES) or labour broker for the municipality. According to workers, the municipality was meant to employ them permanently after three months.

The workers’ case went from the bargaining council to the Labour Court, where the application to be reinstated was dismissed. The court instead ruled that the municipality was supposed to give workers permanent jobs and awarded compensations of up to R24,000.

But workers insist that they want jobs rather than compensation and so they decided to appeal the ruling.

On Tuesday, Lawyers for Human Rights (LHR), for the workers, questioned the municipality’s reason for employing the workers on fixed-term, instead of permanent contracts.

But the municipality, in its heads of argument, disputes that the workers’ dismissals were unfair.

It says that the Lungile Mtshali Development Project “was initiated as a short term measure to alleviate poverty and unemployment through a job creation scheme”.

According to the municipality, the fixed-term contract signed by the workers clearly stated that they would only be employed for 12 months on a first contract and then, by Hlaniki, for four months on a second contract.

“There are no reasons and justifiable grounds to award compensation for a startling amount,” the municipality argued.

In a statement, LHR said that job creation programmes “often lead to the exploitation of workers, whether intentionally or due to negligence”.

“Instead of actually alleviating poverty and creating jobs. In cases like this, municipalities avoid their obligations as employers resulting in the violation of workers’ rights.”

Outside court, William Gundwane, a former employee, said, “This case has been dragging for six years. We want a resolution; we want permanent jobs from the municipality.”

Some protesting workers told GroundUp that they have been struggling to find work. They claim to also not be allowed to claim unemployment assistance because some of them are still listed as municipal employees.

Next:  Elderly in rural Eastern Cape struggling to register for vaccines

Previous:  Vaccines: it’s not so simple