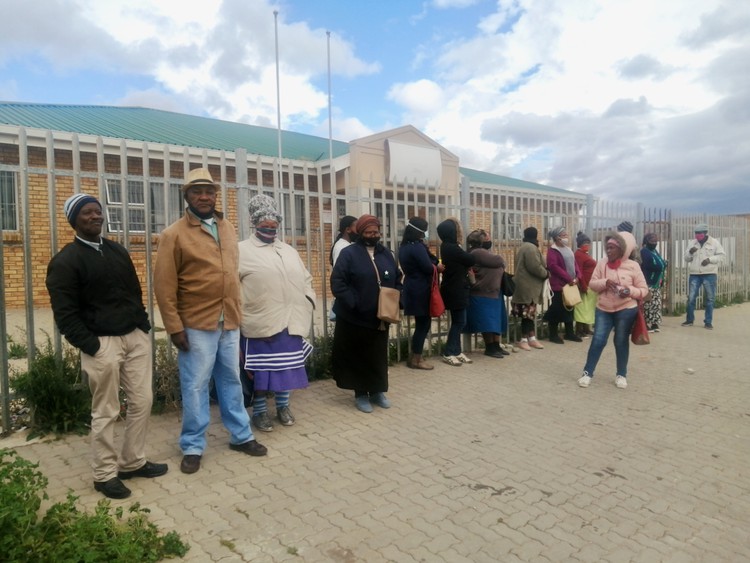 Social grant beneficiaries were turned away at SASSA’s Zwide office in Port Elizabeth on Tuesday, because the office had no water. The office opened to long queues on Wednesday. Photo: Mkhuseli Sizani

About 100 SA Social Security Agency (SASSA) beneficiaries and applicants were furious when officials at the Zwide offices in Koyana Street, Port Elizabeth, turned them away on Tuesday morning because the building had no water.

Many people in the queue were elderly and some had started to queue as early as 5am, waiting for the office to open at 8am. Some accused the officials of looking for excuses to get out of work.

Residents said a pipe had burst on Monday night in Koyana Street, cutting supply to the area.

“Water and toilets have nothing to do with processing of our applications. SASSA should have installed Jojo tanks and used them as a back-up in situations like these,” said Thobeka Muvambo, from Govan Mbeki.

She said, “On Monday I was here but after 11am we were turned away by these officials. They said it was too late to serve us … Today [Tuesday], I arrived at about 6:20am, but the officials used the burst water pipe as an excuse not to help us. Not a single person was served. I spent R30 for taxi fare to come here. The officials said even if we come tomorrow there is no guarantee that we would be served, because Wednesdays are for processing children’s grants.”

Luzuko Qina, Provincial SASSA spokesperson, said, “Staff and clients were advised to come Wednesday. The burst pipe is being fixed.” Qina did not respond to other questions.

On Wednesday morning, there were long queues outside the gates and queues inside as well.