With President Cyril Ramaphosa scheduled to speak, and the South African Federation of Trade Unions (Saftu) holding a May Day rally only a couple of streets away from the Cosatu event, the pressure was on.

Though Cosatu pulled out all stops to draw the crowds, it only filled three-quarters of the 10,000-capacity stadium. Meanwhile at the nearby Saftu rally, there was standing room only.

Many of the people at the Cosatu rally were not unionised workers but unemployed people who were brought in via local ANC structures to fill the stadium. The unemployment rate in the wider Port Elizabeth area is 33%, the highest of all metros in South Africa.

Numsa (National Union of Metal Workers of South Africa) drove the process that resulted in the formation of Saftu last year, and the union is particularly strong in Port Elizabeth. The largest trade union in the country, it was expelled from Cosatu in 2014 because of its opposition to Jacob Zuma. The general strike called by Saftu on 25 April showed that the new federation has considerable support among workers.

Cosatu’s power has been significantly diminished in recent years. The Association of Mineworkers and Construction Union was officially registered in 2001 and by 2012 it had displaced the Cosatu-affiliated National Union of Mineworkers (NUM) at many mines.

Ramaphosa’s speech was well received, but when Dlamini started speaking the crowds began to stream out of the Port Elizabeth stadium. The people bussed in from ANC wards had come to see and listen to the president of the ANC and not Cosatu.

Dlamini’s claim that Cosatu had held a successful event is not credible.

South African Communist Party (SACP) Secretary General Blade Nzimande spoke against the disunity of the organised working class. He said that Cosatu is an ally of the SACP, “however, we as the SACP will reach out to other progressive worker formations to say, let’s unite around the things that unite us and not divide ourselves”.

There was a very different tone in Bloemfontein where Saftu held its main May Day rally. Irvin Jim, General Secretary of Numsa, lambasted President Cyril Ramaphosa, a former NUM shop steward, for stripping workers of their constitutional right to strike.

“He is imposing limitations by saying before we go on any strike, we should [have a secret] ballot, and clearly that’s a stance against workers embarking on a strike,” said Jim.

He said the National Development Plan was about economic exploitation. “It’s a strategy to say to foreign direct investment, come and invest in South Africa because we have cheap labour for you to exploit,” said Jim.

Last year, Cosatu’s Workers’ Day rally in Bloemfontein had to be called off after vigorous protests against the presence of then President Jacob Zuma.

This year, a sea of red flooded the Madiba arena in Bloemfontein with many supporters lamenting terrible working conditions, exploitative employers, and low wages. 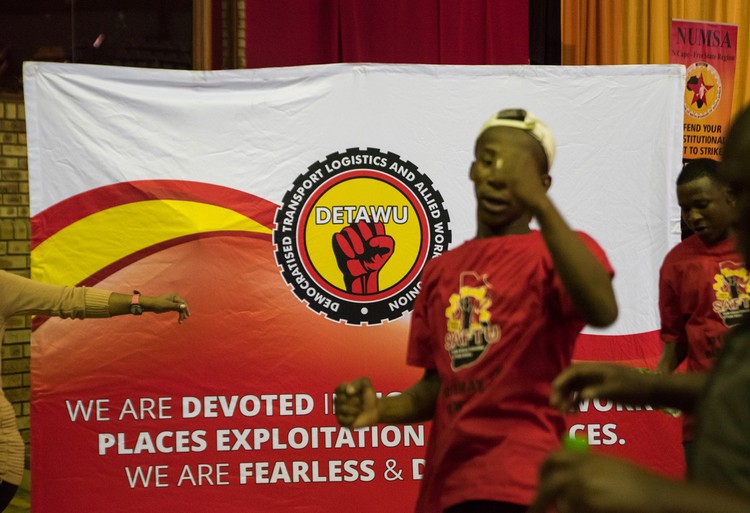 Lerato Mohatlane, a member of the Food and Allied Workers’ Union, told New Frame that he believed amendments to the labour laws would lead to further exploitation.

He said he gets paid R3,500 a month (which is the equivalent of the new minimum wage). He has unemployment insurance and a pension fund, but no medical aid. Mohatlane is the breadwinner at home.

Mohatlane said many workers borrowed money from “bomashonisa” to supplement their income, but with the added interest this resulted in a debt trap.

Judging by the stark differences between the Cosatu May Day event in Port Elizabeth and the Saftu event in Bloemfontein, it seems that Nzimande is unlikely to see the organisational unity he desires among workers.

The Congress of South African Trade Unions (Cosatu) was launched at the Currie’s Fountain football ground in Durban in December 1985.

The new federation brought some of the black trade unions that had formed after the Durban strikes in 1973 into a powerful new political force.

The following year the new federation called for a mass stay-away on 1 May. The May Day stay-away became a regular and highly charged political event.

After the end of apartheid, May Day was named Workers’ Day and made a national public holiday.

Produced for GroundUp by New Frame

Next:  Violent clashes between Mitchells Plain and Siqalo residents