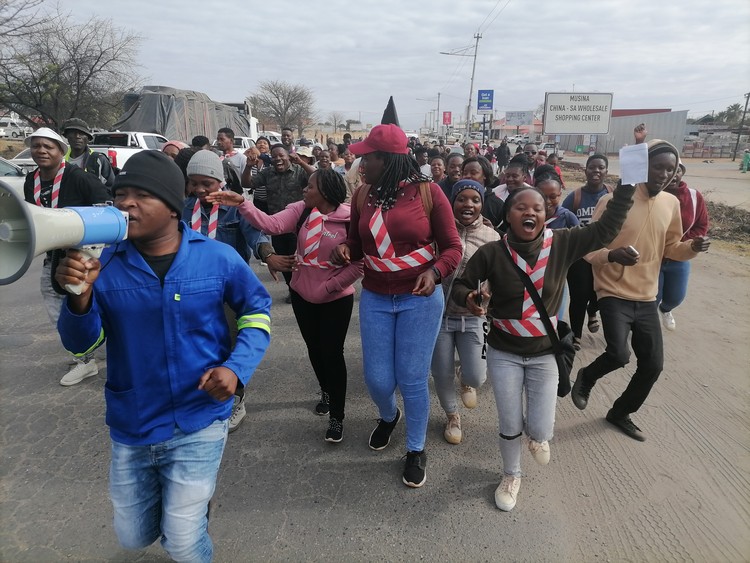 Unemployed young residents of Musina marched to the mall and two local mines to demand that they be employed. Photo: Bernard Chiguvare

More than 100 unemployed young Musina residents marched from Nancefield to Musina Mall and two local mines on Wednesday to demand that they be employed in local projects.

Many of the marchers we spoke to said they completed matric over five years ago but they have never had permanent employment. First stop was the mall where the protesters demanded that management only employ people from the surrounding communities. They also want the company to set up a youth desk where they can directly submit their CVs and to create more space for young entrepreneurs from the community.

In addition to their memorandum, the group handed over 93 CVs to mall management. David Mhango from Musina Mall management accepted the memo.

At Venetia Mine’s offices next to the mall, 132 CVs were handed over to a representative. Protesters demanded to know details about who the mine contracted. They objected to the contractors bringing workers from outside the community. Eddy Bowers, Venetia Mine manager signed the group’s memo and promised to “escalate the matter”.

The group then got into six mini bus taxis and were transported to Vele Mine about 30km west of Musina town. Here they handed over 117 CVs to a representative. Naomi Makhela, executive secretary for the mine, signed and accepted the memo.

Vele mine stopped operating in 2010, but according to protesters the company promised that when it reopens priority would be given to previous employees and the youth. They say this didn’t happen when the mine recently reopened.

Ronica Barreto, 25, is a mother of two and said she is struggling to feed her children. Barreto said she moved to Musina from Pretoria in 2016, hoping that she would find work at mines or the mall.

“Most of the time people from outside Musina are employed by the mines and the mall. When will I get a chance to benefit as a Musina resident,” said Barreto.

Maimele Ntuthuko, 23, is the sole breadwinner of a family of ten but he is not formally employed. He said he joined the protest, hoping to get a permanent job.