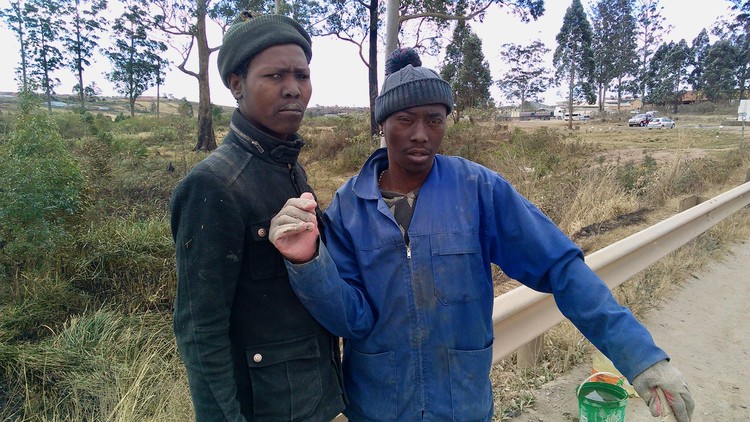 “We decided to help the people of Lusikisiki and ourselves,” says Siphiwe Mlonji (right). He and Lindani Mbotyeni (left) fix potholes on the R61 to Flagstaff. Photo: Sibahle Siqathule

Taxi drivers, truck drivers and motorists complain that the R61 connecting Flagstaff and Lusikisiki in the Eastern Cape is potholed and getting worse. With potholes on both lanes, motorists say it is like manoeuvring through a minefield

Two unemployed young men saw an opportunity in this. They started filling the potholes and asking passing motorists for a donation.

“The municipality was not showing any indication of fixing the roads. We then decided to help the people of Lusikisiki and ourselves,” says Siphiwe Mlonji.

Mlonji and Lindani Mbotyeni, both 26, from Cabekwane location, first met in Durban two years ago while looking for work and they have been friends ever since.

Neither of them have any formal qualifications, Mlonji having dropped out of school in grade 9, and Mbotyeni in grade 10, because of a lack of money at home.

They taught themselves to paint, plaster and build.

They find damaged cement bags in local hardware stores, buying a 50kg bag for R75, and use them to fill potholes.

Mlonji says they barely survive on what they earn.

“We are reliant on the kindness of the strangers who drive past while we fill the potholes. We appreciate every cent they give us. No one at home is employed, so with this money we are able to feed our families,” says Mbotyeni.

They used to collect scrap metal for recycling, but that ended with the Covid-19 lockdown.

“If we get permanent jobs we will be able to do more for our families. I will even be able to sleep at night and not have to wonder what we are going to eat tomorrow,” says Mlonji.

Ingquza Hill Local Municipality Mayor Bambezakhe Goya applauded their efforts. “We appreciate the efforts of these young men to help fix an obvious problem. But we do not encourage such actions because they put their lives in danger when doing this. They don’t have the necessary signage to alert motorists that they are working on the road,” he said.

Goya said the municipality was struggling to repair the roads because of budget constraints and under-performing construction companies.

“We decided to take a phased approach,” he said. “In Lusikisiki we’re constructing paving because we saw that it is less expensive compared to tarring a road. That’s what our budget allows for right now.”

“In Flagstaff we hired a service provider who struggled. After expressing our concerns we subsequently fired the company. We hired another that worked but after a while they decided that they were not up to the task.”

Eastern Cape Department of Transport spokesperson Khuselwa Rantjie said the department was aware of the condition of the R61 and had set aside a budget to fix it.

“The project is currently being evaluated for the award of the contractor and the plan is to have it started not later by the month of September. In the interim, the departmental in-house teams are maintaining the road to improve its safety,” said Rantjie.

But Border Alliance Taxi Association rank manager Thembela Dumisa said, “We have suffered for years driving on these terrible roads, and for years we have been promised that the roads would be repaired. That has not happened. In the meantime our vehicles are being damaged by these potholes. What’s worse is that lives are being put in danger because driving on these roads is risky.”

GroundUp could not get details from the municipality on what budget had been set aside for the rehabilitation of the 92 kilometre stretch of road.

Previous:  Enemies of the nation: How the “war on drugs” has failed South Africa