Workers on the timber plantations of Sonskyn fear for their jobs

Woodsmen and their families who have lived for decades in the remote community of Sonskyn in the Southern Cape face an uncertain future. The pine plantation is to be handed over to the Department of Agriculture and Forestry, but no-one in the community knows if their jobs will survive

“Of course, the community is worried. Where will they go?”

Ponoyi works for Mountain To Ocean (MTO), the commercial forestry company which has managed the vast pine plantations of the Southern Cape for decades. Now the plantations are to be handed over to the Department of Agriculture, Forestry and Fisheries (DAFF) as part of an “exit strategy” agreed on in 2000, when the government announced the phasing out of certain commercial plantations belonging to the South African Forestry Company Limited (SAFCOL). The reason given for the decision at the time was that the plantations were not viable and forestry was not the right use of the land.

The area initially involved was just over 8,000 hectares in Buffelsnek, where Sonskyn is located. There have since been counter-proposals by the company and an independent evaluation. But with no clear deal in sight, a socio-economic disaster looms over Sonskyn.

“By 2020 we’re out of here. It’s part of a deal with the government – it’s been a long time coming, and our hands are tied,” Tommy Eckley says. He’s been the main manager in the Buffelsnek region for many years. 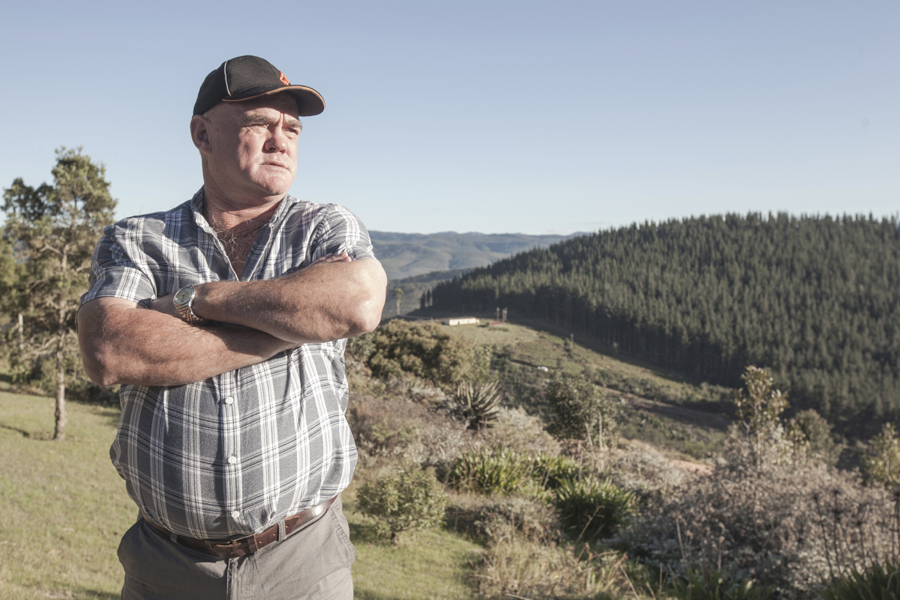 “They say that there will be no more work here in 2020, I’ve heard them (MTO) talking about it,” says chainsaw operator Hannes, who’s been working for the company for five years. He did not want to give his surname.

“We’ll have to wait and see. Nobody from government has come here; they don’t care about our future.”

Sonskyn has no commercial or medical facilities, limited eco-tourism opportunities, and only a dilapidated school that serves as an informal daycare centre. The nearest commercial hub is Knysna, 30km away on a winding dirt road, potholed by the passage of timber trucks and a lack of maintenance. Residents often hitchhike on the long road, or hang onto logging trucks, to shop in Knysna for supplies.

Two residents sit outside one of the wooden cottages and describe their pursuit for sustainable employment. “Gabon” used to work as a “choker-setter”, chaining the logs for the company. “It was hard work, and when I saw people losing their jobs, I thought, ‘Am I next?’ So I left, and got a part-time job on a farm nearby as a mill-operator – at least I know I will have work in the future.” 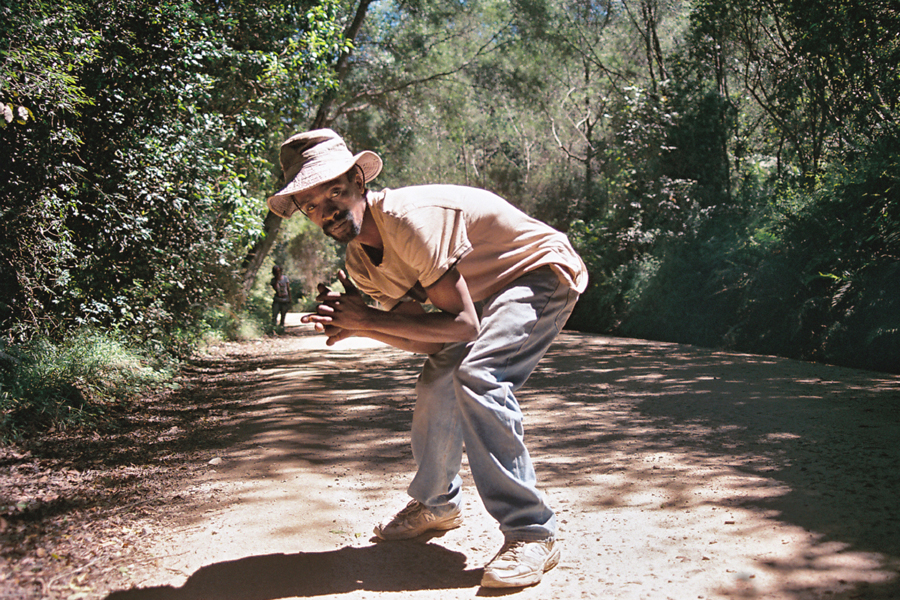 Sonskyn resident “Gabon” waits on the long dirt road to Knysna, hoping for a lift into town. Photo: Luke Daniel

Gabon and his friend Christopher “Cribo” have found forestry work for private landowners in the area, providing them with a stable income and a level of certainty no longer available to the Buffelsnek families.

But rather than offer work to the people of Buffelsnek many local landowners choose to make use of cheap immigrant labour (mainly Malawians) which has inflated xenophobic tensions in the area.

Most of the forestry workers remain unskilled and will battle to find work outside the industry - or even within it. The DAFF has yet to implement any kind of skills development program within the community of Sonskyn.

“I’ve lived here all my life. My husband worked in the forests and died a long time ago,” Aunt Lucie (who did not give her surname), one of the oldest residents of Sonskyn, tells GroundUp. “Now where must I go? I’m too old to move away. I haven’t got family that I can go to. I really don’t know.” 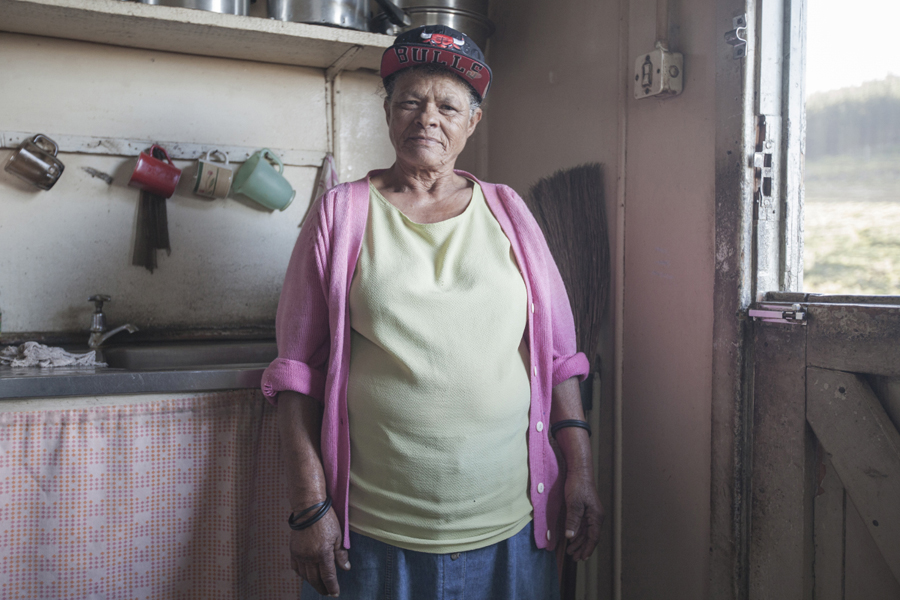 “Aunt Lucie” has lived in Sonskyn all her life. Photo: Luke Daniel

“DAFF need to actively engage with the community, and come up with solutions,” Ponoyi says.

There are 30 households in Sonskyn, with an average of six people per household, and only two household members permanently employed by the forestry company. Households survive by combining forestry wages of about R3,000 a month with social grants for pensioners, children and the disabled. If they have no jobs in forestry, the residents will leave, reducing Sonskyn to a ghost town, a remnant of the past. 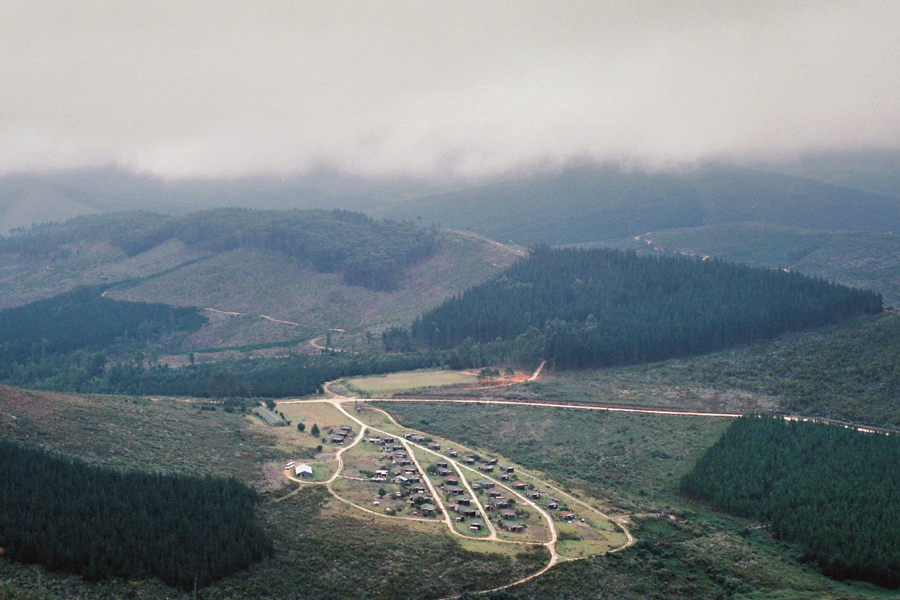 The small logging community of Sonskyn at the top of Buffelsnek in the Southern Cape. The modest wooden cottages are home to 180 men, women and children. Photo: Luke Daniel

With no official comment by the DAFF, rumours abound in Buffelsnek, with some residents fearing that the government will bring in Chinese plantation managers who will in turn bring in Chinese labour, leaving locals destitute.

Attempts to reach DAFF chief director of Communications Steve Galane via phone and email were unsuccessful. Mountain To Ocean suggested GroundUp contact Thandeka Gwala of DAFF with regards to the Exit Strategy in the Western Cape but calls were not answered. The Western Cape Department of Agriculture’s Giselle Terblanche said she could not comment.

I think Daff has completely lost the plot. There are huge spinoffs from those plantations. The entire fruit crop from the Western Cape is exported on pallets manufactured from the logs grown in those plantations. Must the timber be imported from the eastern Transvaal or Natal on huge diesel trucks that damage the national roads?

What about the secondary uses for pine industrial timber such as the furniture industry, a large employer? And I won't even talk about the structural timber that holds up the roof of virtually every residential house whether it be a mansion in Constantia, a RDP house on the cape flats or a shack in an informal settlement.

Yes, pine trees were planted in some very sensitive places, through a lack of knowledge. But this is easily corrected by simply not replanting those tiny areas at the next rotation. South Africa has for years been self sufficient in the supply of softwood saw timber.

Must we now import timber at the expense of foreign exchange and jobs? I trained in the department of forestry as a forester and sawmiller in the 1970's?

Empower the community of Buffelsnek (Knysna)

As a young boy I grew up in Buffelsnek and its sad to read what is happening there. I think that DAFF will not just leave the people. What should happen is that the area become the ownership of the people staying there. Then a big corporate like MTO must be appointed to still do forestry as the people do not have the tools and equipment to do it. However which ever corporate must develope local contractors from the community to do the job thereby empowering the local communities and pay rent to farm the land.

Skills development should also be provided for the young children from the community, so they can become foresters and work for their community. I am a forester and will most certainly go and work there given that DAFF has given clear guidelines for their plans and what will happen. Soft Wood production has always been an important part of Knysna's economy and many sawmills rely on SW for furniture manufacturing.

DAFF should start communicating with the communities to give clear guidelines on the process going forward. To give the land to the people will be great, but will they be given the means to farm the land? Hence my suggestion to continue with forestry and develop skills in the community, provide jobs for locals and also make them contractors.

This should be stated in an MOU once a decision about the way forward is made.

Good luck to my people.