UCT students protest against registrations being blocked because of outstanding fees 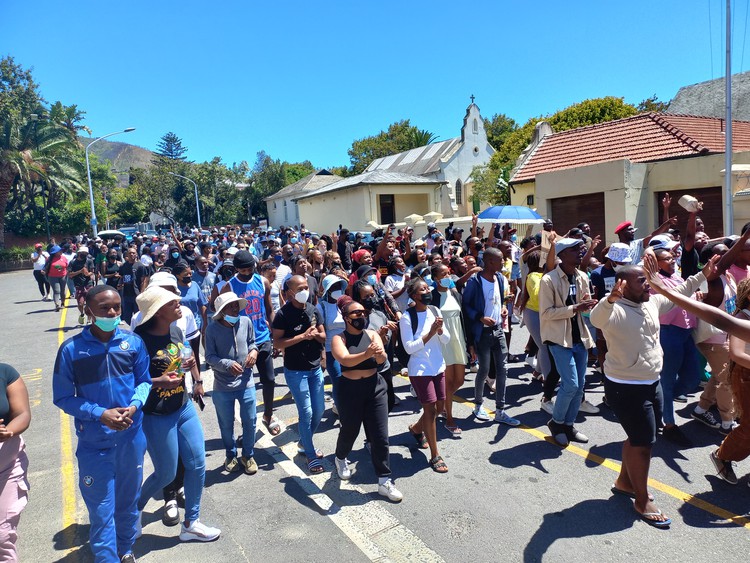 Students marching through the University of Cape Town’s campus on Thursday over ongoing registration issues due to fee payment blocks. The protesters say UCT failed to ensure that students’ problems with registration had been resolved before classes started on Monday. Photo: Marecia Damons

About 200 students protested at the University of Cape Town (UCT) on Thursday over ongoing registration issues due to fee payment blocks. (A fee payment block means a student cannot register until their outstanding fees are paid.) The protesters say UCT failed to ensure that students’ problems with registration had been resolved before classes started on Monday.

The university’s Student Representative Council (SRC) is demanding that all students’ fee blocks be lifted and that UCT implement a sustainable system to help clear all historical debt. They also want all classes to be postponed until Monday, pending the outcome of a special council meeting.

Disruptions at UCT first started a week ago when the SRC shut down part of the campus by blocking access roads. Following the protest last Friday, the SRC met university management where a plea was made for classes to only resume once all eligible students could register.

On Thursday morning, students gathered at the Graca Lawns before heading to the Graca Machel Hall, Leo Marquard Hall and Kopano residences to get more students to attend their meeting. After discussing their challenges with their peers, the large group then protested outside a lecture hall on upper campus.

SRC vice president Siya Plaatjie told protesters that they were asked by UCT’s management not to shut down campus, on condition that the university holds up its end of the deal to allow all students to access their academic material pending their registration. According to Plaatjie, about 1,400 students face possible financial exclusion.

When the students’ issues had not been resolved by Wednesday, the SRC said it took a decision to shut down the campus yet again. Plaatjie said students experiencing registration delays are also unable to access their full allowance from the National Student Financial Aid Scheme (NSFAS), causing further challenges to their academics.

In a statement on Wednesday, UCT’s Vice-Chancellor Professor Mamokgethi Phakeng said the SRC’s decision protest was “despite the fact that all of their demands have now been met”.

But in another statement, she said that 512 student registrations were still being processed. Of these, 122 were new submissions.

Earlier in the week, Phakeng said that UCT had explained to the SRC some of the actions taken to ensure that no student with outstanding fees, and who has a legitimate basis for exemption from the fee block, would be excluded when the new term started on Monday.

These measures included raising the exemption from the fee block from R1,000 to R10,000, extending the deadline for students to apply for exemption as well as the grace period for outstanding fees to be paid, and giving students, who are awaiting the outcome of appeals, full access to the academic portal as well as to lectures and tutorials.

Phakeng said the start of the academic year would not be suspended. “Where possible teaching will continue online. Confrontation with protesting students should be avoided,” she said.

A special council meeting is to be held on Monday. The council will deliberate on the current fee block policy and its approach to student fee debt. The SRC will be represented at the meeting.

Previous:  No secure access to water in Limpopo villages in spite of Lindiwe Sisulu’s R143m pledge